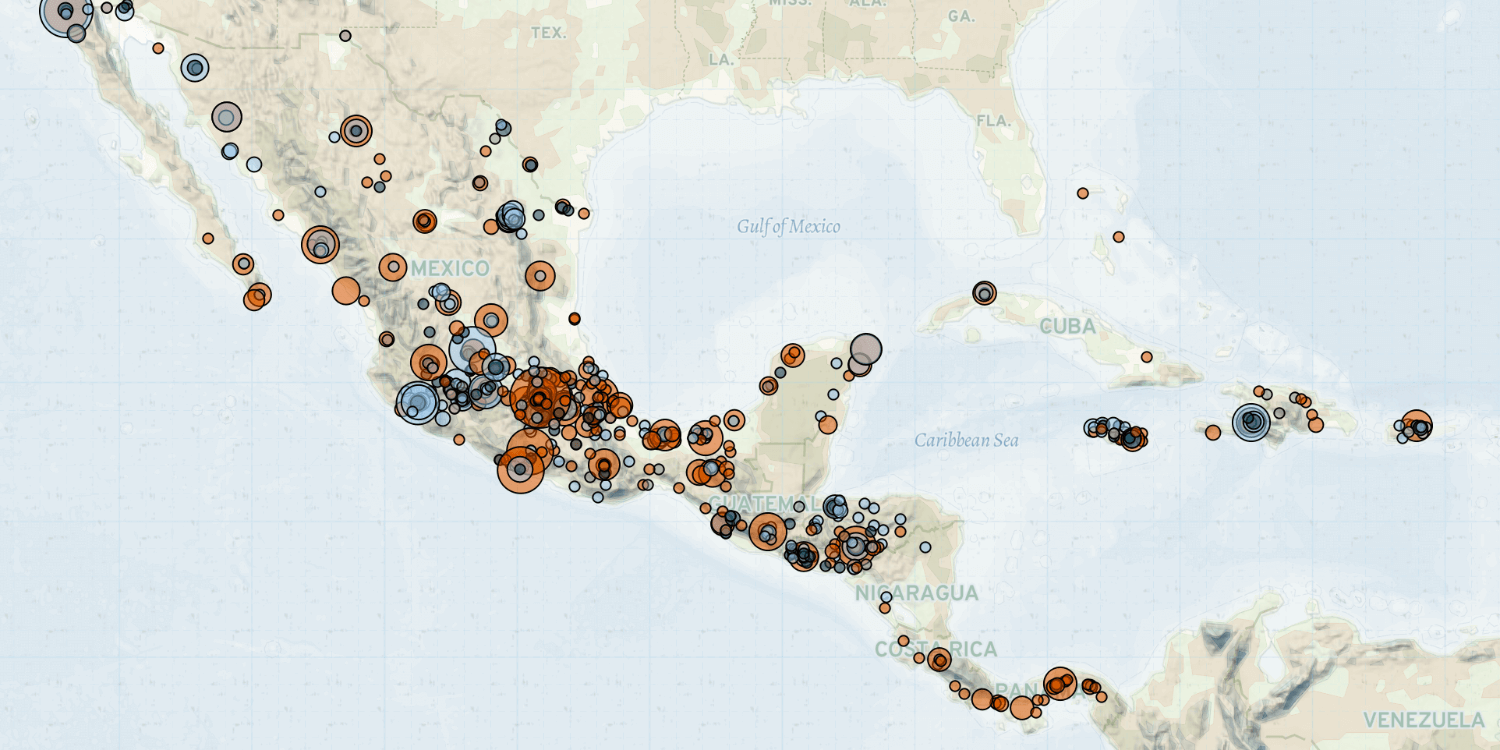 Last week, in Mexico, Central America, and the Caribbean, political violence increased, driven by gang-related attacks and violence against social leaders in Mexico and El Salvador. In Mexico, gang attacks against civilians increased last week in Colima and Sinaloa states, while truck drivers held nationwide demonstrations demanding greater security. In Jamaica and Honduras, extortion and gang-related attacks prompted an increase in violence. Meanwhile, the visit of the Duke and Duchess of Cambridge triggered protests demanding reparations for slavery in the Bahamas and Jamaica.

In El Salvador, rival gangs engaged in a series of retaliatory attacks last week, leaving four gang members dead, most of them members of the Mara Salvatrucha (MS-13). Though such attacks were recorded in several departments, most of these and other violent incidents occurred in San Salvador and Santa Ana departments. These trends contribute to the 33% increase in violence in El Salvador over the past week relative to the past month that is flagged by ACLED’s Conflict Change Map.1 Violence remained high in El Salvador throughout the weekend, prompting the government to declare a state of siege on 27 March 2022 (BBC, 27 March 2022). These events will be included in next week’s data release and will be further explored in next week’s regional overview. The latest increase in violence follows peaks of violence recorded during the last months of 2021, which experts have linked to gang attempts to pressure the government amid alleged negotiations between gangs and the government (El Faro, 28 March 2022). Civil society organizations and the US government have accused the government of negotiating with imprisoned gang leaders seeking judicial concessions and better conditions inside prisons in exchange for a reduction of violence (América Enomía, 29 December 2021). President Nayib Bukele has denied these accusations while claiming that homicide rates have remained low in recent years as a result of his security plan, known as the ‘Territorial Control Plan’ (France 24, 8 December 2021).

Elsewhere, in San Tomás municipality, unidentified suspects beat a woman social leader to death on 22 March. The victim was reportedly killed for her advocacy for women’s rights and for her work offering support for women victims of violence (Voces, 22 March 2022). Women activists and social leaders, and women in politics more largely, face such targeted violence, often perpetrated by anonymous agents (for more, see ACLED’s report on political violence targeting women in politics). Local civil society organizations have reported an increase in femicides in El Salvador in 2021 compared to the year prior and denounced the lack of government policies to prevent this type of violence (EFE, 24 November 2021).

Meanwhile, violence against civilians increased last week in Sinaloa and Colima states. Attacks against civilians by armed suspects and gang members contributed to the 150% increase in violence in Sinaloa over the past week relative to the past month, as flagged by ACLED’s Subnational Surge Tracker. Most of the violence in Sinaloa was recorded in the city of Culiacán, where three civilians were killed last week. According to experts, the violence comes amid ongoing disputes between factions of the Sinaloa Cartel, which is the dominant drug trafficking organization in the state (La Razón, 16 December 2021).

In Colima state, violence slightly increased last week compared to the week prior as gangs continue to attack civilians, leaving at least nine dead. Among the attacks recorded last week, gang members killed the director of the Public Ministry of Cuauhtémoc municipality in a drive-by shooting on 25 March. These trends contribute to the 184% increase in violence in Colima last month relative to the past year flagged by ACLED’s Subnational Threat Tracker, which first warned of increased violence to come in this state in the past month. Violence in Colima has spiked since February 2022 following the rupture of an alliance between the Jalisco New Generation Cartel (CJNG) and the Los Mezcales gang (Infobae, 15 February 2022).

Additionally, truck drivers blocked roads as part of a national strike on 22 March, led by the Mexican Alliance of Transport Organizations (AMOTAC). Demonstrators denounce extortions by police and call for greater security on the roads, and a reduction in gasoline prices and toll fees (La Jornada, 22 March 2022). Demonstrations were recorded in 26 of the 32 states of Mexico last week. Truck drivers lifted the roadblocks and ended the strike on 23 March after the government agreed to start a dialogue with them and review their demands (Expansión Política, 23 March 2022).

In Jamaica, gang attacks against civilians resulted in the 80% increase in violence in Jamaica last week relative to the past month that is flagged by ACLED’s Conflict Change Map. The majority of the violent incidents were recorded in Kingston and Hanover parishes, with four civilians killed in separate extortion-related attacks in the latter. While violence in Hanover has not been common, it has become increasingly volatile, resulting in a shift from a place of ‘low risk’ to being considered an area of ‘growing risk’ by ACLED’s Volatility and Risk Predictability Index. Last week’s increase comes in spite of the government’s implementation of new security measures, including a new gang task force and gun-control policies, which the government claims have helped to reduce violence in the first months of 2022 (Loop News, 19 March 2022).

In Honduras, violence also continued to increase last week amid attacks by gang members and armed suspects against civilians. Last week, almost half of the attacks recorded by ACLED in the country targeted taxi drivers, leaving three drivers dead. This violence contributed to the 30% increase in violence in Honduras last week relative to the past month flagged by ACLED’s Conflict Change Map, which first warned of increased violence to come in the country in the past month. In recent weeks, public transport drivers have interrupted their activities and decried an increase in attacks by gang members attempting to extort payments. Authorities have claimed that extortions and gang disputes for the control of local drug markets are the dominant drivers behind this recent increase in violence (Swissinfo, 4 March 2022).

In Jamaica and the Bahamas, people protested on the occasion of the royal visit of the Duke and Duchess of Cambridge last week, demanding Great Britain apologize for slavery and pay reparations to the former colonies, which remain part of the Commonwealth. In Jamaica, members of the Rastafari and Maroon communities protested in Montego Bay and Kingston, respectively. During a meeting between the Duke and Duchess and the Prime Minister of Jamaica Andrew Holness last week, Holness stated that Jamaica intends to become a republic, considering cutting ties with the British crown (France 24, 24 March 2022).