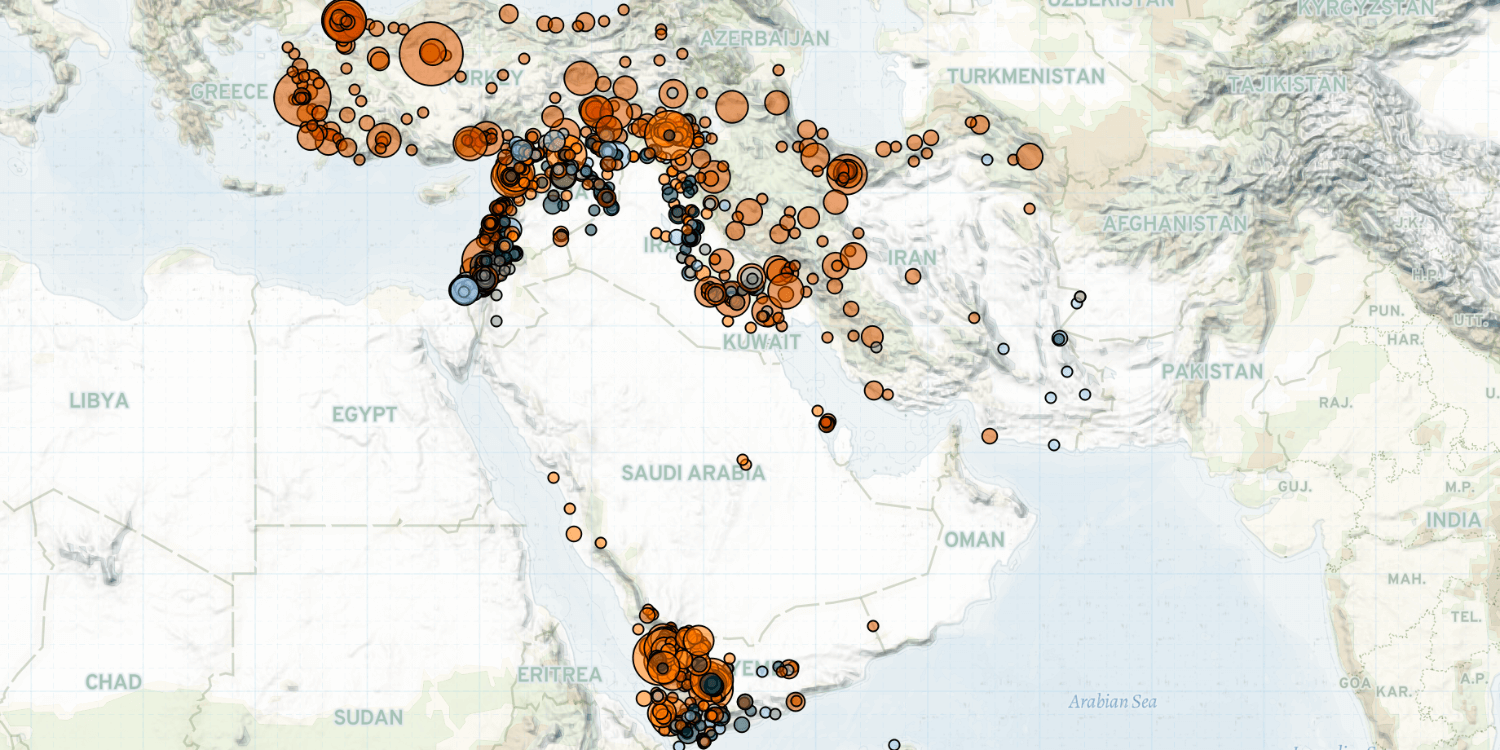 Last week in the Middle East, political violence in Yemen reached some of its lowest levels since the start of ACLED coverage in 2015, after it dropped by nearly half compared to the week prior. Conversely, in Saudi Arabia, Houthi aerial attacks reached some of their highest levels since 2015. In Syria, Syrian regime shelling increased in opposition-held areas. In Iraq, Turkish airstrikes increased in Duhok province, marking the start of the spring campaign season. In Turkey, pro-Kurdish protesters demonstrated across the country in support of Kurdish rights and demands. In Israel, a pro-Islamic State (IS) Israeli Bedouin killed four people before being shot and killed. In Jordan, countrywide protests erupted against the results of municipal elections.

In Yemen, no clashes were recorded last week in Hajjah governorate for the first time since the launch of the failed pro-Hadi offensive in early February, as political violence fell to pre-offensive levels. In Marib governorate, political violence decreased by more than half last week compared to the week prior due to a significant drop in Saudi-led coalition airstrikes. Unlike in Hajjah, though, armed clashes remained at relatively stable levels compared to the week prior, continuing around the Balaq mountain range to the south of Marib city.

This overall decrease in violence in Yemen last week took place amid a range of international peace initiatives. On 20 March, UN Special Envoy Hans Grundberg met with Houthi officials as part of UN efforts to secure a truce during the upcoming holy month of Ramadan, which begins on 2 April (Reuters, 20 March 2022). Simultaneously, the Gulf Cooperation Council is preparing to hold intra-Yemeni consultations in Saudi Arabia to support the UN Special Envoy’s own consultations with Yemeni political parties (Reuters, 16 March 2022; Reuters, 20 March 2022). Last week, Saudi Arabia also proposed a new “peace initiative” that would include a nationwide ceasefire (Al Arabiya, 22 March 2021).

Contrastingly, Houthi forces escalated drone and missile attacks on Saudi Arabia last week, targeting sites in seven out of the 13 Saudi provinces with bomb-laden drones, ballistic missiles, and Quds-2 cruise missiles. The attacks took place between 19-20 March and on 25 March, forming the second and third round of what Houthi authorities have called “Siege-Breaking Operations,” in reference to the continued closure of Sanaa airport and the control of vessels around the Hodeidah port by the Saudi-led coalition (Yemen News Agency (SABA), 19 March 2022; Ansar Allah, 20 March 2022; Ansar Allah, 26 March 2022). They claim to have targeted six different facilities of the Saudi Arabian Oil Company (Aramco), although not all attacks were acknowledged by Saudi authorities. In the most publicized incident, a strike on the Aramco facility in Jeddah caused a large fire that was visible for several days (Reuters, 26 March 2022). These attacks resulted in a 298% increase in violence in Saudi Arabia over the past month relative to the past year that is flagged by ACLED’s Conflict Change Map.

IS militants continued attacking regime forces and pro-regime militias in the Syrian Desert last week, while shifting their operations from Al Mayadin district in Deir-ez-Zor province to Al Rasafah district in Ar Raqqa province. Turkish and rebel groups also increased activity in Ar Raqqa province, shifting the focus of their shelling campaign from Al Hasakeh and Aleppo provinces. Together, these trends contributed to the 113% increase in violence in Ar Raqqa last week relative to the past month, as flagged by ACLED’s Subnational Surge Tracker.

In Iraq, Turkish airstrike events increased significantly last week compared to the week prior. This comes amid the resumption of the campaign season in northern Iraq following typically lower levels of fighting between Turkish and Kurdistan Workers’ Party (PKK) forces from December to March. The Turkish airstrikes focused on Barwari Bala and Nerwa Rekan subdistricts and Amadiya district in Dohuk province. Violence in Duhok is both common and volatile, which is why it is considered an area of ‘extreme risk’ by ACLED’s Volatility and Predictability Index.

Elsewhere, tribal violence significantly escalated in Baghdad city and Maysan province, contributing to the 233% increases in violence in both Maysan and Baghdad last week relative to the past month as flagged by ACLED’s Subnational Surge Tracker. Tribal militants clashed in Mejar Al Kabi, Qalat Salih, and Maimouna districts in Maysan province. This violence occurred despite government efforts to combat tribal violence in the province through imposing curfews in several districts, deploying military forces, and holding talks with tribal leaders in recent months.

Last week in Turkey, Kurds and their supporters protested across the country in support of Kurdish rights and to demand a peaceful solution to the country’s Turkish-Kurdish conflict. Demonstrators gathered in Istanbul, Ankara, Diyarbakir, Izmir, Van, and dozens of other cities and towns to celebrate the Kurdish New Year – Newrouz — and to demonstrate in support of Kurdish causes. Among other demands, protesters demand an end to a strict isolation policy imposed on jailed PKK founder Abduallah Öcalan, the release of critically ill prisoners, and the official recognition of the Kurdish language in Turkey (AFN News, 21 March 2022). Police intervened in massive demonstrations in Diyarbakir and Istanbul — where at least a million demonstrators gathered in Diyarbakir and 500,000 in Istanbul (Mezopotamya Agency, 21 March 2022; Bianet, 20 March 2022) — and arrested a large number of demonstrators. During the police intervention in Diyarbakir, clashes erupted between police and demonstrators.

In Israel, an Israeli Bedouin with known IS sympathies killed four Israeli civilians last week. The attacker stabbed and killed four people and injured two others in Beersheba city before an armed bus driver shot and killed him. Israeli security forces had previously arrested the attacker in 2015 for spreading pro-IS propaganda while working as a teacher (Jerusalem Post, 22 March 2022). He had also served time in jail after being convicted of trying to leave for Syria to join IS, but he had been released in 2019 (BBC News, 23 March 2022). This is the first time ACLED captures an attack by an IS-linked individual in Israel.

In Jordan last week, nationwide demonstrations erupted against the results of Jordanian municipal elections held on 22 March. Some of the demonstrations became violent after unidentified armed individuals attempted to force their way into voting centers, with shots reportedly fired (Roya News, 22 March 2022). Security forces intervened in the violent demonstrations, dispersing demonstrators and arresting tens. These trends contribute to the increase in violence in Jordan over the past week relative to the past month that is flagged by ACLED’s Conflict Change Map.