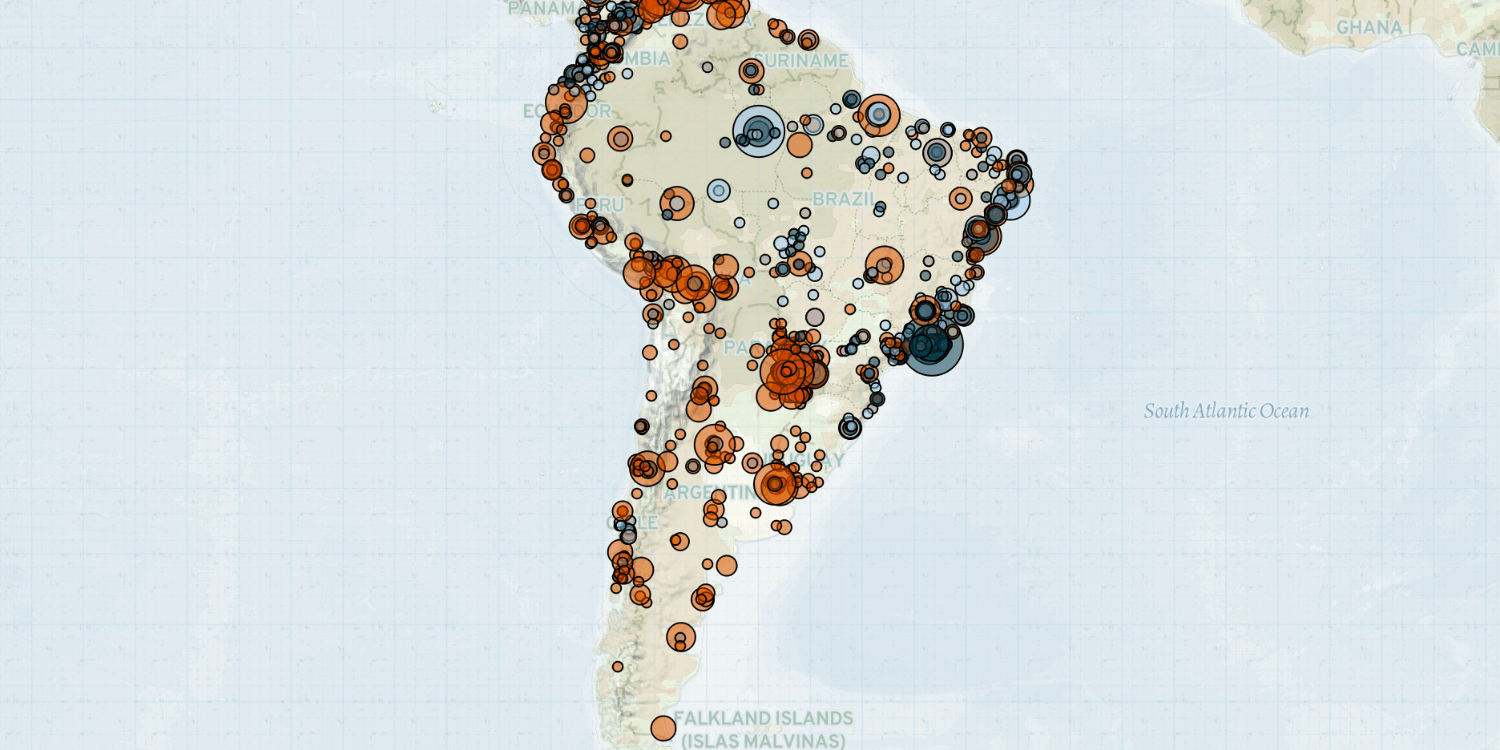 Last week in South America, violence continued amongst armed groups, as did demonstrations. In Colombia, clashes took place between the military forces and the Gulf Clan in the Chocó and Bolívar departments. Moreover, rival Gulf Clan groups clashed over internal disputes within the armed group. In Venezuela, four Yanomami Indigenous persons were killed by Venezuelan military forces. In Brazil, drug trafficking disputes continue to lead to armed clashes across the country. Meanwhile, farmers protested in Bolivia following the killing of a man during a land clash over a property in Guarayos municipality. In Chile, students held nationwide demonstrations requesting higher food stipends by the government; demonstrations turned violent in Santiago, with reports of clashes and blockades.

In Colombia, military forces launched a combined air and ground operation against the Gulf Clan in the Chocó department last week, resulting in the deaths of three Gulf Clan members. The operation was the latest in a series of recent operations that security forces have carried out against the armed group, including the capture of many of its leaders. This has led to power struggles within the group and internal clashes among mid-level commanders (El Colombiano, 22 March 2022). In Cartagena, Bolívar department, rival Gulf Clan factions clashed in an internal dispute over control of drug revenues in the area. At least one member of the group was killed. This violence contributed to the 214% increase in violence in Bolívar last month relative to the past year flagged by ACLED’s Subnational Threat Tracker. The Subnational Tracker first warned of increased violence to come in Bolivar in the past month. While violence in Bolívar has not been common, it has become increasingly volatile, resulting in a shift from a place of ‘low risk’ to being considered an area of ‘growing risk’ by ACLED’s Volatility and Risk Predictability Index.

Meanwhile, in Venezuela, air force personnel opened fire on a group of Yanomami Indigenous people in Parima B community in Amazonas state last week, killing four Yanomami people and injuring three others. Two soldiers were also injured in the ensuing violence. Details surrounding the event are unclear, though some reports indicate that the soldiers opened fire when members of the community sought the return of a wi-fi router that had been lent to the soldiers (Caraota Digital, 22 March 2022). Meanwhile, other reports claim the Yanomami community attacked the soldiers with bows and arrows because the officers refused to allow the community to use the wi-fi router (Efecto Cocuyo, 22 March 2022). Local sources state that Venezuelan soldiers have been withholding access to basic services, including Internet access, as a means of pressuring the Yanomami people into ceding control over their territory for gold mining purposes (La Patilla, 25 March 2022).

In Brazil, rival drug trafficking groups clashed in Bahia, Sergipe, and Rio Grande do Sul states last week. In Bahia state, 11 people were killed across multiple clashes and drive-by shootings, with civilians among the fatalities. In Salvador municipality, four drug traffickers were killed when they clashed with military police in the Cosme de Farias neighborhood. Despite state authorities implementing several measures to curb violence, such as paying a bonus to police officers when certain crime rates decrease (Jornal Grande Bahia, 1 March 2022), Bahia remains home to the highest number of violent deaths in the country (A Tarde, 21 February 2022).

Similarly, in the state of Sergipe, clashes between rival drug trafficking groups resulted in the deaths of six drug traffickers last week. These trends contribute to the 195% increase in violence in Sergipe last month relative to the past year flagged by ACLED’s Subnational Threat Tracker, which first warned of increased violence to come in the state in the past month.

In the state of Rio Grande do Sul, several clashes were reported between rival drug trafficking groups, leading to the killing of at least three people last week. These trends contribute to the 100% increase in violence in the state over the past week relative to the past month, as flagged by ACLED’s Subnational Surge Tracker. Located between Argentina and Uruguay, Rio Grande do Sul is a hub for drug trafficking, smuggling, and other illicit economic activities (Zero Hora, 5 January 2022). Moreover, the capital city, Porto Alegre, is a port area that provides drug trafficking groups with a gateway to the European market (Zero Hora, 5 January 2022).

In Bolivia, approximately 300 farmers staged a protest and blocked the Beni-Santa Cruz highway throughout last week; the protest was in response to the killing of a student on 20 March in a land dispute between rival communal militias in Guarayos, Santa Cruz department (El Deber, 21 March 2022). Demonstrators demand that the government seek a solution to the land conflict, which has centered on the possession of some 30,000 hectares confiscated by the state from an American businessman in 2012 (El Deber, 25 March 2022). Santa Cruz department is the country’s leading producer and exporter of soybean and oilseeds and is the center of numerous disputes between opposing political groups and agricultural land encroachment (El Deber, 25 March 2022).

In Chile, thousands of students took to the streets on 25 March in nationwide demonstrations demanding an increase in food stipends provided by the state and the resignation of the director of the National School Aid and Scholarships Board (JUNAEB) (Biobio Chile, 25 March 2022). Students claim that the current stipend of 32,000 Chilean pesos per month (approximately USD $40), which was last adjusted in 2012, is insufficient in providing them with basic food items (Cooperativa, 25 March 2022). In Santiago, demonstrations turned violent after police forces intervened with water cannons, with demonstrators setting objects on fire, vandalizing bus stops, and attacking a pick-up truck belonging to the Chilean Air Force. A police officer shot and injured one student participating in the demonstration. Eight police officers were also injured in the violence, and seven demonstrators were arrested. This violence contributes to the 300% increase in violence in the Metropolitana region over the past week relative to the past month, as flagged by ACLED’s Subnational Surge Tracker.