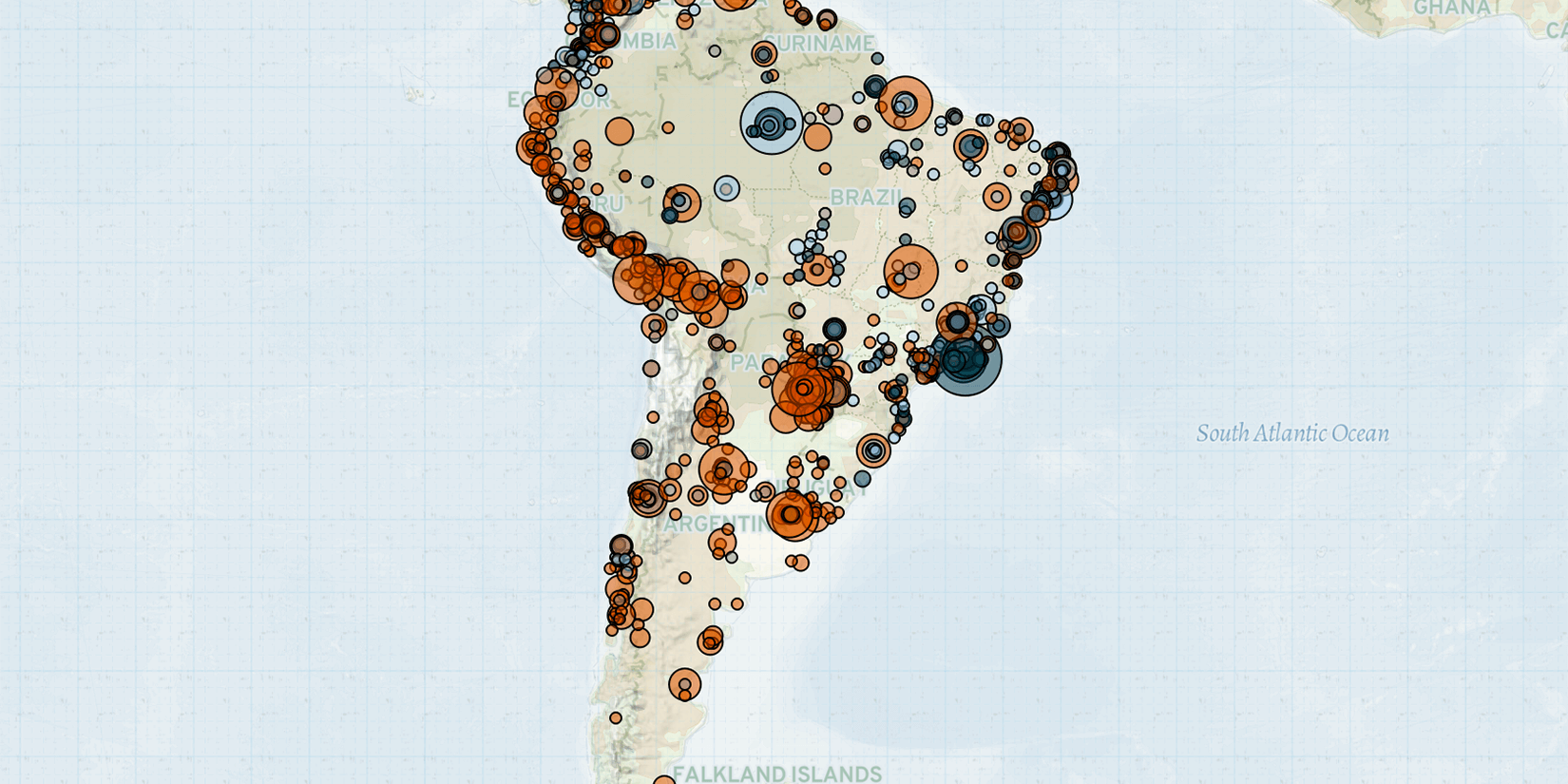 Last week in South America, violence remained at similar levels compared to the week prior, while demonstrations significantly increased. In Colombia, 11 people were killed during a military operation in Putumayo, while two children were killed when suspected members of the 33rd Dissident Front of the Revolutionary Armed Forces of Colombia (FARC) set off an explosive in Bogotá. In Chile, nationwide demonstrations in remembrance of dictatorship victims turned violent as students erected barricades and clashed with state forces in Santiago. In Peru, truck drivers rallied against fuel price increases, while in Brazil, app delivery workers protested across the country. In Brazil, violence levels increased in Pernambuco state, while several clashes were reported between the Red Command (CV) and state forces in Rio de Janeiro city.

In Colombia, at least 11 people were killed during a military operation in the rural area of Puerto Leguizamo, Putumayo department, last week. Government authorities claim that all those killed were members of the armed group Frontier Command (Comandos de la Frontera, in Spanish). However, local organizations refute this version and state that the attack occurred during a public celebration held by locals (El Espectador, 30 March 2022). A member of the Community Action Council (JAC) and a Quechua Indigenous governor were both killed in the operation. The Colombian Ombudsman’s Office supports the community’s version of events and has called for an investigation into the operation (El Colombiano, 30 March 2022; El Colombiano, 1 April 2022).

In the capital, Bogotá, suspected members of the 33rd Dissident Front of the FARC set off an explosive device in a police station in the Engativa locality, killing two children and injuring 39 other people. In response to the attack, 200 additional military troops were deployed to the city (El Tiempo, 1 April 2022). Violence in Bogotá is both common and highly volatile; it is considered an area of ‘extreme risk’ by ACLED’s Volatility and Predictability Index.

In Chile, nationwide demonstrations took place in commemoration of the Day of the Young Combatant on 29 March, which remembers the killing of the Vergara Toledo brothers by police officers during the Augusto Pinochet dictatorship in 1985 (Biobio Chile, 29 March 2022). Demonstrators, mostly students, rallied against human rights violations perpetrated during the dictatorship. Many demonstrations turned violent, with rioters clashing with police forces, throwing Molotov cocktails, installing barricades, and vandalizing property, with violence centering on the capital, Santiago, and the Metropolitana region. These recent events contribute to the 445% increase in violence in Metropolitana last week relative to the past month flagged by ACLED’s Subnational Surge Tracker, which first warned of increased violence to come in Metropolitana last month.

The massive demonstrations pose a challenge to President Gabriel Boric, a former student leader himself, who actively participated in the 2019 students’ mass demonstrations. In past weeks, students have also led several demonstrations to demand an increase in food stipends provided by the state and denounce recent cases of sexual harassment against women students.

In Peru, demonstrators took to the streets last week against a hike in fuel prices, with truck drivers leading massive rallies and blocking several highways across the country. Demonstrators demand a decrease in fuel prices and the elimination of the selective consumption tax (ISC) on fuels for national transportation workers (Diario Correo, 1 April 2022). While most demonstrations were peaceful, there were reports of blockades with burning tires in some localities and clashes with police forces, mainly in the departments of Junin and Lima. After President Pedro Castillo claimed that the leaders of transportation unions were “being paid” to rally, demonstrators announced they would continue to strike until their demands are met (Diario Correo, 2 April 2022). These events come amid increasing political pressure on Castillo, who has survived two motions of vacancy and is at risk of being removed from the presidency (The Guardian, 5 April 2022). The demonstrations in Peru follow similar rallies in Paraguay in the previous week, amid soaring fuel prices worldwide, including in South America (Reuters, 10 March 2022).

Meanwhile, in Pernambuco state, a six-year-old child was killed in the crossfire during a clash between drug traffickers and military police officers in the Porto das Galinhas area in Ipojuca city. Locals claim the police officers were firing aimlessly, prompting the state’s secretary of social defense to request an investigation of the event (G1, 1 April 2022). Multiple destructive demonstrations broke out in response to the child’s death, with roadblocks erected in several areas of Porto de Galinhas. Porto de Galinhas is a tourist getaway, and many tourists could not leave the city due to the roadblocks placed by locals (Folha PE, 31 March 2022). These recent events contribute to the 150% increase in violence in Pernambuco over the past week relative to the past month, as flagged by ACLED’s Subnational Surge Tracker.

Finally, violence continued unabated in Rio de Janeiro city last week, with members of the CV and state officers engaging in several armed clashes across the North Zone of the city, resulting in the deaths of at least three suspected CV members. Shoot-outs were reported in Quitungo, Morro do Fubá, and Furquim Mendes communities. Following these shoot-outs, locals reported that CV members had escaped and fled to areas around the Praça Seca neighborhood in the West Zone (Informe Agora, 26 March 2022). Clashes between the CV and police militia members were also reported in Praça Seca, a historical stronghold of police militias in the city.