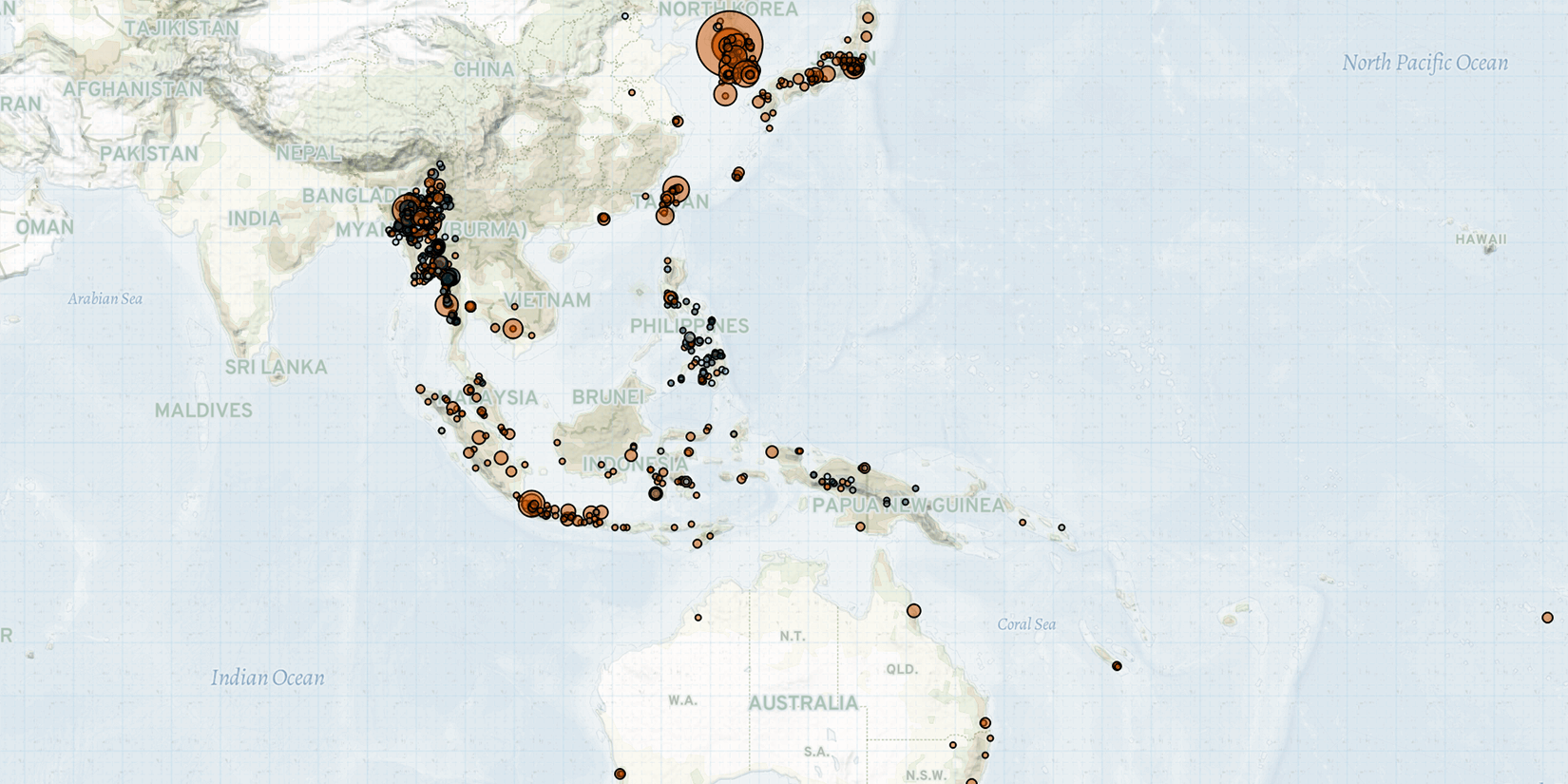 Last week in the East Asia Pacific region, fighting intensified between the Myanmar military and ethnic armed organizations (EAOs) and local defense forces. In the Philippines, four communist New People’s Army (NPA) rebels were killed by the military in Northern Mindanao. In Indonesia, fighting between state forces and the separatist West Papua National Liberation Army (TPNPB) was reported in Papua province. In Mongolia, several demonstrations took place against rising commodity prices. In Singapore, people held a protest demanding the government abolish the death penalty. In South Korea, there were multiple protests against the country’s participation in the Comprehensive and Progressive Agreement for Trans-Pacific Partnership (CPTPP), a free trade agreement involving 11 countries in the region. In Australia, health workers continued demonstrations for the second week, demanding better pay and working conditions.

In Myanmar, fighting intensified between the Myanmar military and EAOs in northern Shan state last week. On 4 April, the military launched an offensive against the Myanmar National Truth and Justice Party/Myanmar National Democratic Alliance Army (MNTJP/MNDAA) in Monekoe in Muse township along the Chinese border (Myanmar Now, 5 April 2022). The military also clashed with the Kachin Independence Organization/Kachin Independence Army (KIO/KIA) operating in Pang Hseng (Kyu Koke). In neighboring Namkhan township, the Palaung State Liberation Front/Ta’ang National Liberation Army (PSLF/TNLA) shot at members of the Pangsay people’s militia force after they failed to stop their car at a security checkpoint, killing three members of the militia and injuring five others.

In eastern Shan state, the United Wa State Party/United Wa State Army (UWSP/UWSA) clashed with the Restoration Council of Shan State/Shan State Army-South (RCSS/SSA-S) on 5 April in Mongton township. Each side accused the other of initiating the clash and claimed to have suffered casualties in the fighting (BNI, 7 April 2022). The UWSP/UWSA has recently completed large-scale military training and increased reinforcements in the area (Network Media Group, 6 April 2022). Amid ongoing territorial disputes, the UWSP/UWSA has moved to marginalize the RCSS/SSA-S in Shan state (Asia Times, 22 February 2022).

Armed resistance against the Myanmar military continued elsewhere last week. Local defense forces clashed with an advancing military column in Magway region in central Myanmar. Over 20 local defense forces collectively defended against military advances in dozens of villages in the Yay Lal Kyun area in Yesagyo township in Magway region along the border of Myaung township in Sagaing region. During the fighting, state forces engaged in shelling, set villages on fire, and abducted civilians for use as human shields (BNI, 4 April 2022). Violence in Magway is both common and highly volatile; it is considered an area of ‘extreme risk’ by ACLED’s Volatility and Predictability Index.

The military also continued targeting children last week. In Ahlone township in Yangon region, soldiers raided a kindergarten and detained a 3-year-old child over his parents’ alleged support of the People’s Defense Force (PDF). The child’s mother was later shot and arrested. According to the Assistance Association for Political Prisoners, over 250 children have been detained by the military since the coup (RFA, 7 April 2022).

In the Philippines, the military killed four NPA militants in an operation in Bukidnon province, Northern Mindanao, on 6 April. The military claimed that the militants were high-ranking leaders and called the deaths a “big blow” to the NPA in the region (SunStar, 7 April 2022). Two other clashes between state forces and the NPA were reported in Eastern and Central Visayas. ACLED’s Subnational Threat Tracker first warned of increased violence to come in Central Visayas in the past month.

In Indonesia, state forces clashed with TPNPB rebels last week in Ilaga district, Puncak regency, Papua province, killing one rebel. A further clash in Puncak regency was reported in Kago village, after which the rebels set fire to civilian houses. This violence contributed to the 63% increase in violence in Indonesia last week relative to the past month flagged by ACLED’s Conflict Change Map, which first warned of increased violence to come in the country in the past month.

In Mongolia, four days of demonstrations took place in several locations across the country last week against inflation and a surge in commodity prices. On 8 April, Prime Minister Luvsannamsrain Oyun-Erdene addressed the demonstrators in Ulaanbaatar, apologizing and presenting a new draft law to prevent price increases (Udriin Sonin, 8 April 2022). Despite this, protesters continued to march outside the State Palace.

In Singapore, more than 400 people held a peaceful protest at the Speakers’ Corner at Hong Lim Park on 3 April (Mothership, 3 April 2022), urging the government to abolish the country’s death penalty. The protest followed the hanging of a drug trafficker on 30 March, the first execution in the country since 2019 (The Guardian, 30 March 2022). The Speakers’ Corner — the only place where Singaporeans can legally protest — was reopened in late March after two years of closure due to COVID-19 restrictions (Straits Times Singapore, 25 March 2022).

In South Korea, a coalition of groups representing the interests of farmers and fishermen demonstrated last week against the country’s potential joining of the CPTPP, a free trade agreement comprising 11 countries in the region. On 4 April, hundreds of Korean Advanced Farmers Federation (KAFF) members took to the streets in Seoul (Korea JoongAng Daily, 4 April 2022), decrying potential competition with cheaper agricultural and marine imports resulting from the CPTPP. The Korean government is currently drafting an official application to join the CPTPP before the current administration of President Moon Jae-in ends in May (YNA, 27 December 2021).

In Australia, health workers continued demonstrating last week in Sydney and across the state of New South Wales for the second consecutive week, calling for mandated staff-to-patient ratios and pay raises.