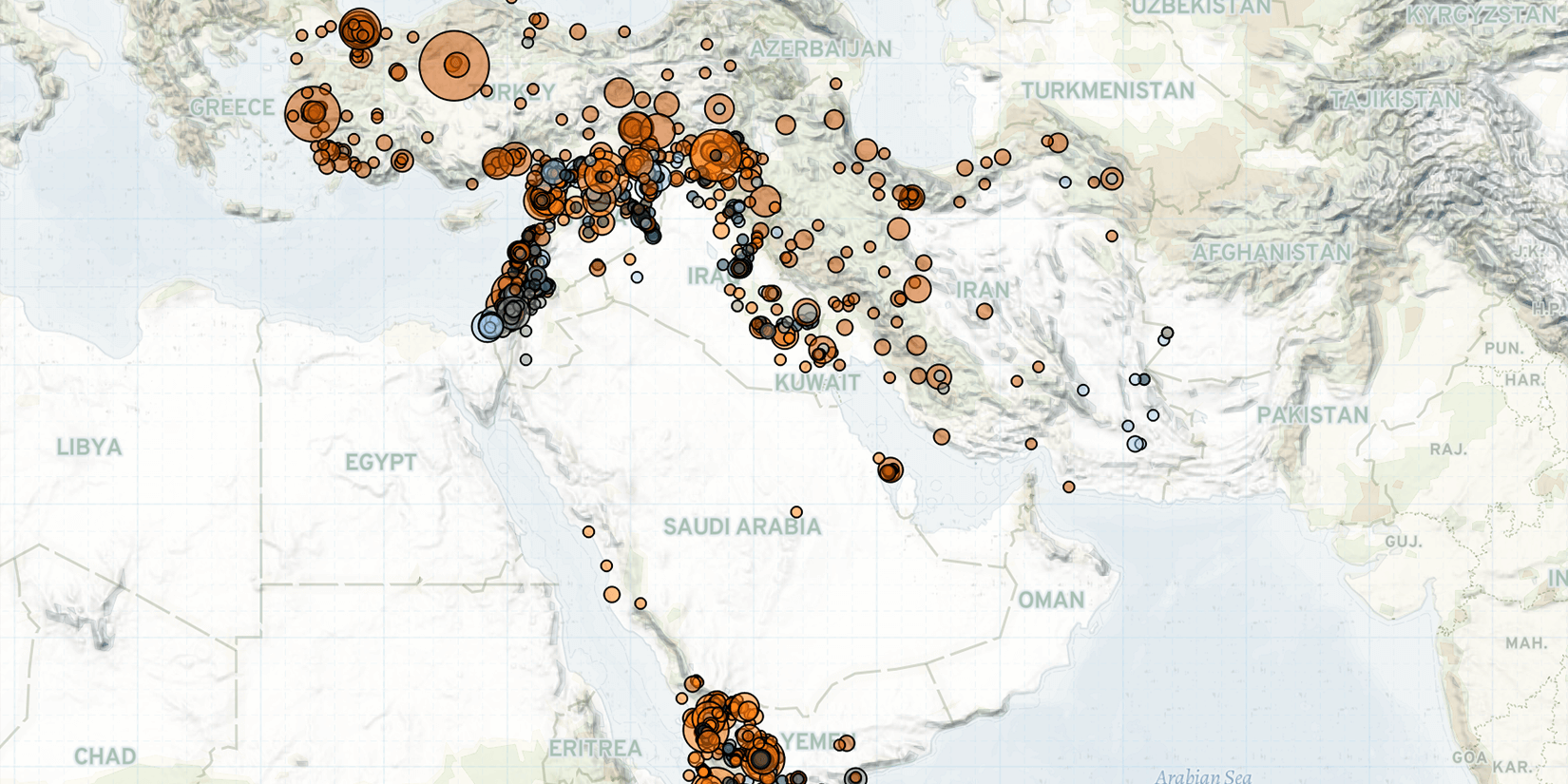 Last week in the Middle East, political violence decreased in Yemen as a two-month truce announced by the UN Special Envoy for Yemen the week prior came into effect on 2 April. In Syria, heightened Syrian Democratic Forces (QSD) abduction activity continued for a second consecutive week and Russian airstrikes increased. In Iraq, Iraqi forces implemented new security measures to protect civilians during Ramadan amid concerns of increasing Islamic State (IS) activity. In Israel, a Palestinian gunman killed three people in a bar attack in Tel Aviv before being killed by Israeli security forces. In Palestine, Israeli forces clashed with and killed three members of the Palestinian Islamic Jihad (PIJ). In Iran, a suspected Sunni fundamentalist killed two Shiite clerics in a stabbing attack.

In Yemen, political violence decreased as a two-month truce announced by the UN Special Envoy for Yemen the week prior came into effect on 2 April. The decrease in political violence last week was partly due to a drop in Saudi-led coalition airstrikes. The coalition did not conduct any air raids from fighter jets last week, in accordance with its statement the week prior that it would stop military operations in Yemen for an undetermined period of time starting 30 March (Saudi Press Agency, 29 March 2022). Despite this, ACLED records a number of coalition drone and Apache helicopter-borne strikes. Meanwhile, Houthi forces did not conduct any drone or missile attacks on Saudi Arabia for the second consecutive week.

Despite the truce, several military confrontations occurred between Houthi and pro-Hadi forces last week. Houthi offensives were reported in Marib and Taizz governorates only hours after the truce came into effect (Al Masdar, 3 April 2022). Meanwhile, reports of shelling activity remained at heightened levels — accounting for more than half of all political violence events — as pro-Houthi and pro-Hadi sources published competing reports of truce violations throughout last week.1The sharp increase in shelling events in Yemen comes amid reporting shifts by conflict parties in the context of the truce, as Houthi- and Hadi-affiliated media have begun publishing near daily ‘violations’ reports (Yemen News Agency – Pro-Houthi, 2 April 2022; Yemen News Agency – Pro-Hadi, 3 April 2022). These reports might come with a potential for exaggeration and overreporting, as both attempt to portray the other party as the violator of the agreement (for more on ACLED sourcing in Yemen, see the ACLED Methodology and Coding Decisions around the Yemen Civil War). By comparison, shelling events accounted for less than 15% of all political violence in February 2022.

At the political level, consultations initiated the week prior in Riyadh ended last week with one of the most significant developments in Yemen since the conflict began. On 7 April, Yemeni President Abdrabbuh Mansour Hadi delegated his powers to a newly established eight-member presidential council headed by former interior minister Rashad Al Alimi. The new council brings together leaders from various important anti-Houthi factions (for more analysis on the council, see these reactions from senior experts of the Sana’a Center, an ACLED partner organization).

In Syria, QSD continued to carry out abductions for the second consecutive week last week. Abduction activity centered on Menbij district in Aleppo province, where hundreds of young men were detained for forced conscription. An increase in acts of forced conscriptions by QSD coincided with a significant rise in shelling by Turkish forces and rebel groups targeting QSD-held areas last week, particularly in Ein Issa district in Ar Raqqa province and Tal Tamer district in Al Hasakeh province. ACLED’s Subnational Surge Tracker first warned of increased violence to come in Al Hasakeh and Ar Raqqa in the past month.

Meanwhile, Russian airstrikes increased almost threefold last week, primarily targeting IS positions in Ar Raqqa and Homs provinces. The airstrikes contribute to the 167% increase in violence in Homs over the past week relative to the past month, as flagged by ACLED’s Subnational Surge Tracker.

Elsewhere, Iranian-backed militias exchanged artillery fire with US and Global Coalition forces in the Omar Oil Field, Deir ez Zor province, injuring two US soldiers. The US deployed reinforcements to the oil field area the day before and after the engagement (Enab Baladi, 8 April 2022).

In Iraq, Iraqi forces deployed reinforcements, set up checkpoints, and established patrols in religious and public places across the country amid concerns of increased IS attacks during Ramadan. IS expanded its activity last week with attacks in Diyala and Al Anbar provinces. IS militants also detonated suicide vests during separate clashes with state forces south of Mosul city and at Jabal Nuwaykit mountain in Ninewa.

Meanwhile, Turkish airstrike events more than tripled last week in northern Iraq, resulting in the most active week of Turkish airstrikes in Iraq since the start of the spring fighting season. The airstrikes were mostly concentrated in Barwari Bala, Nerwa Rekan, and Amadiya districts in Duhok province. These airstrikes contribute to the 113% increase in violence in Ninewa over the past week relative to the past month, as flagged by ACLED’s Subnational Surge Tracker.

In Israel, a Palestinian gunman killed three Israelis and injured nine others in an attack on a bar in central Tel Aviv last week. After escaping the area, the attacker was found and killed by counter-terrorism security forces during a gun battle in the Jaffa neighborhood. The attack follows multiple attacks against Israeli civilians carried out by Israeli Arabs or Palestinians in recent weeks. An Israeli Arab IS-sympathizer carried out an armed attack in Beersheba on 22 March, with further attacks on 27 March and 29 March in Hadera and Bnei Brak, respectively. ACLED’s Conflict Change Map first warned of increased violence to come in Israel in the past month.

In Palestine, Israeli forces clashed with and killed three members of the PIJ in the West Bank last week. Israeli policemen exchanged fire with the militants near Arrabah town in Jenin governorate after the militants opened fire at the soldiers who were attempting to arrest them. Four Israeli policemen were injured in the exchange. Israeli authorities claimed that the militants were responsible for a past shooting near Tulkarm and were planning “future attacks” (Haaretz, 2 April 2022).

In Iran, a suspected Sunni fundamentalist attacked and stabbed three Shiite clerics last week. The attacker, who was from Afghanistan, attacked the clerics in the Shiite shrine of Imam Reza in Mashhad city, killing two and seriously injuring the third. Iranian authorities claimed that the attacker was a takfiri – a common euphemism in Iran for jihadi-Salafi groups like IS and Al Qaeda – and that the attack was motivated by anti-Shiite sentiments (RFE, 8 April 2022).