Fact Sheet: Threats Against HBCUs and Black-Majority Schools in the United States

At the start of January, multiple threats were reported during the first week of school following winter break. After several weeks without any reported incidents, threats against HBCUs and Black-majority schools surged at the end of the month, peaking between 29 January and 5 February (see graph below), when threats were reported at 20 different locations. The spike in threats coincided with the first week of Black History Month in the United States, which is commemorated annually in February. ACLED records at least one threat against an HBCU or Black-majority school during each week of Black History Month. While the number of threats has declined since the end of February, further threats were also reported during the second half of March and into April. 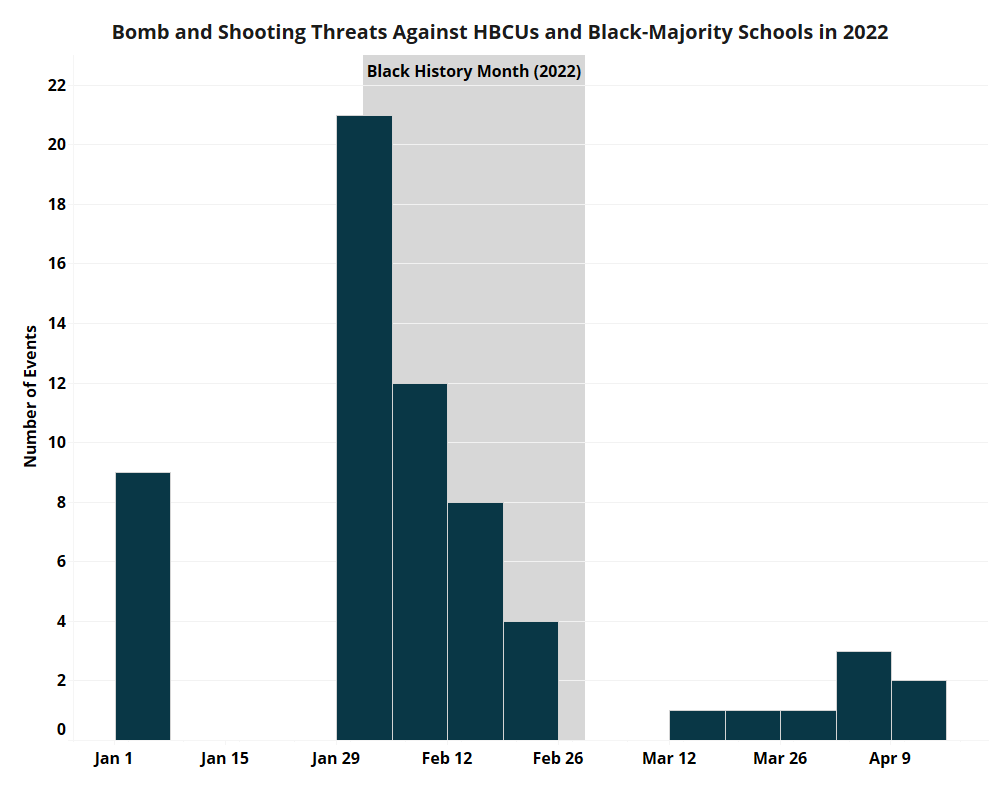 The wave of threats against HBCUs and Black-majority schools comes at a time of heightened pressure on school boards. Throughout 2021, school boards faced frequent demonstrations and meeting interruptions as well as hundreds of violent threats made by opponents of COVID-19 restrictions and critical race theory (CRT) (NPR, 30 August 2021).4 Teachers unions and education policy analysts have noted that CRT is predominantly taught in colleges and law schools, not elementary schools and high schools, suggesting that anti-CRT legislation “is really aimed at erasing and whitewashing American history” for young students (CBS News, 8 July 2021). Demonstrations over CRT spiked in 2021 as states introduced legislation aimed at banning discussion of institutional racism in schools (for more on demonstrations related to CRT, see this ACLED Fact Sheet). In 2022, school board members have continued to face threats over COVID-19 mandates, CRT, and other issues like access to bathrooms for transgender students, often fueled by disinformation campaigns (Reuters, 15 February 2022).

Bomb and shooting threats have been made against HBCUs or Black-majority schools in 15 of the 19 states where HBCUs have been established, in addition to Washington, DC (HBCU First, 2022). Only two threats recorded by ACLED have occurred in states without an HBCU: on 10 March, police investigated a bomb threat and potential armed individual at Santa Ana High School, which is a Latinx-majority school in Santa Ana, California; and on 21 March, school operations were disrupted at Poughkeepsie High School and Poughkeepsie Middle School, two predominantly Black schools in Poughkeepsie, New York, due to a shooting threat on social media that extended over three days.

Although it makes up the smallest geographic area, more bomb threats have been reported in Washington, DC than any state (see map below), with 19 threats recorded between 4 January and 14 February. Meanwhile, 10 threats were reported in Mississippi between 1 February and 6 April — the highest number of any state. Nearly half of the bomb threats in Mississippi occurred in Tunica in northwest Mississippi, including a threat against Tunica Elementary School, one of only two recorded threats against an elementary school. Significant numbers of threats have also been reported in Maryland (seven) and Georgia (five). 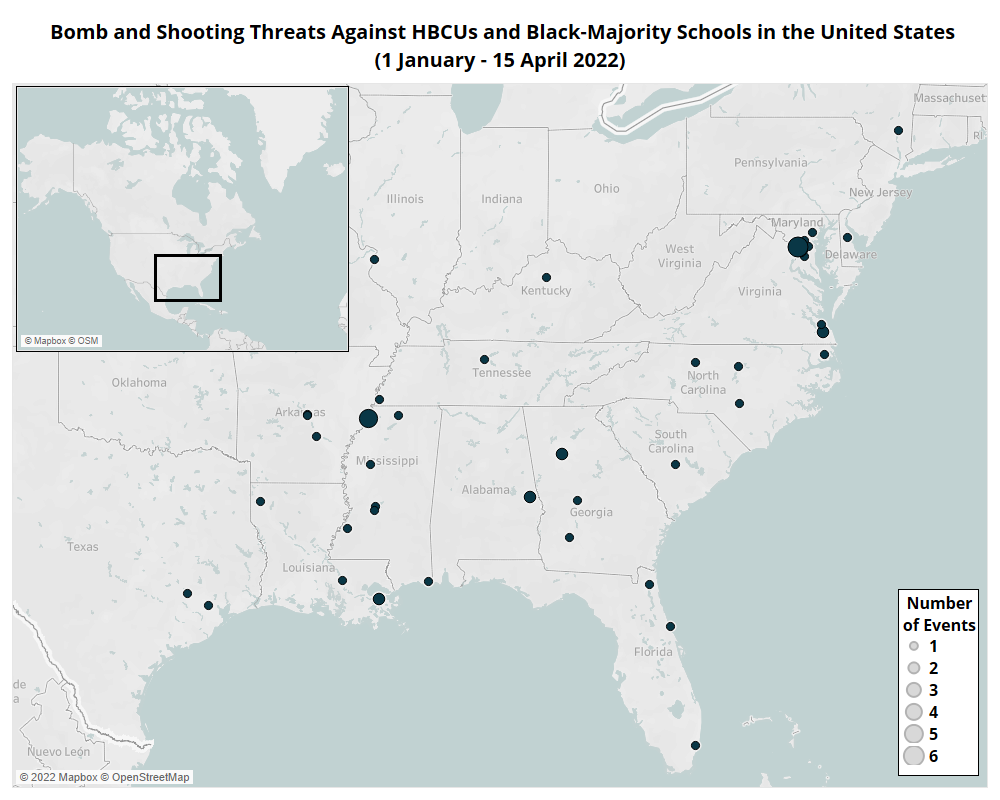