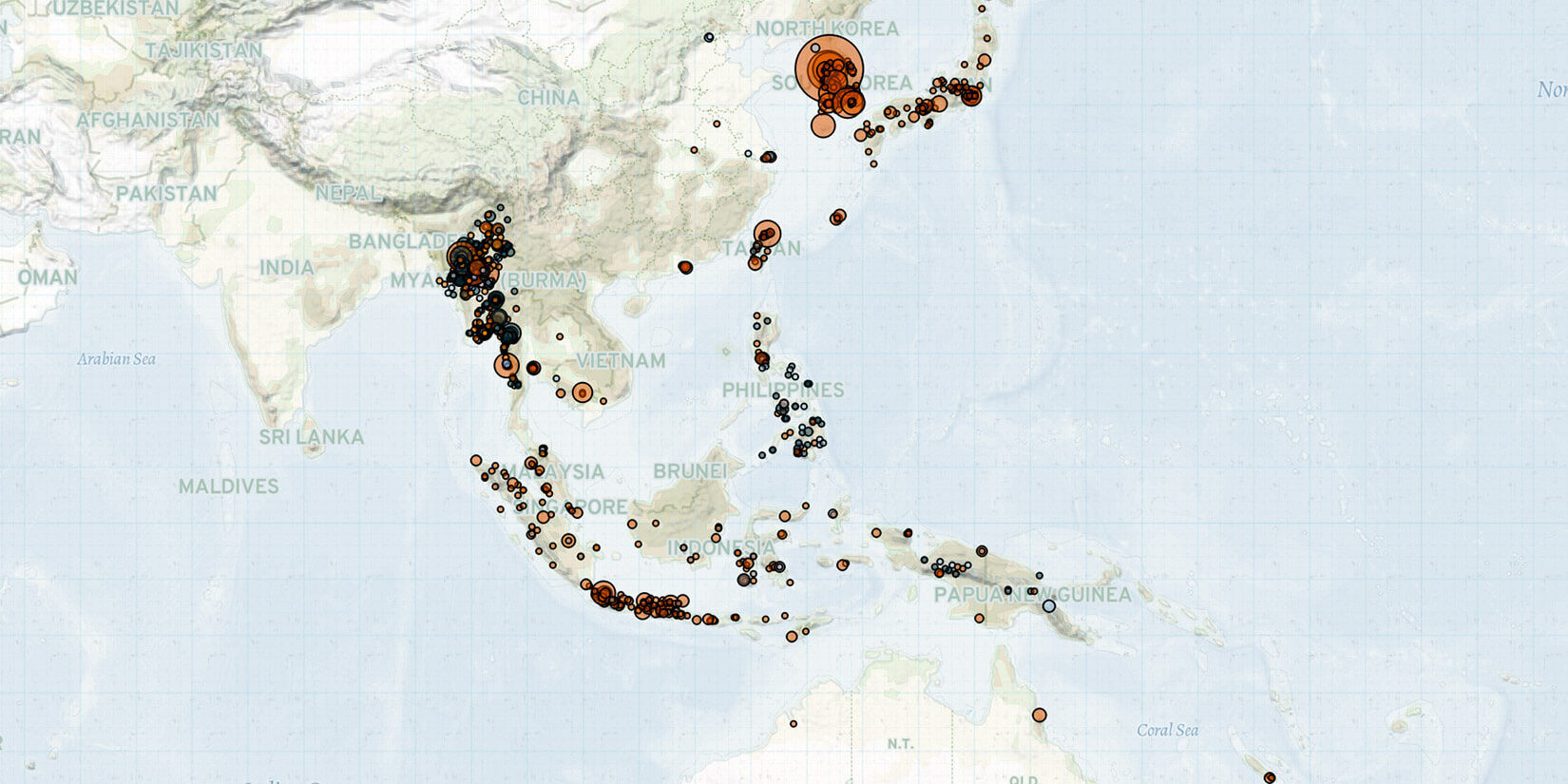 Last week in the East Asia Pacific region, fighting resumed between the Myanmar military and combined forces of local defense groups and ethnic armed organizations (EAOs) in Myanmar. Meanwhile, explosions occurred in major cities during military-led water festivals marking the Myanmar New Year between 13 and 16 April. In the Philippines, fighting between the New People’s Army (NPA) and state forces intensified. In Indonesia, the separatist West Papua National Liberation Army (TPNPB) killed a motorbike taxi driver in Papua province, while demonstrations continued over rumored plans to delay the 2024 presidential elections. In Thailand, an insurgent group carried out bombing attacks in the Deep South. In China, demonstrations against the government’s ‘zero COVID-19’ policy erupted in Shanghai. In South Korea, workers affiliated with the Korean Confederation of Trade Unions (KCTU) held mass rallies to demand better work conditions, while demonstrations also continued against the country’s planned participation in the Comprehensive and Progressive Agreement for Trans-Pacific Partnership (CPTPP). In Australia, demonstrations in support of refugee rights were held across the country.

In Myanmar, fighting continued between the Myanmar military and the combined forces of local defense forces and EAOs last week. In Kayin state, fighting intensified between the military and the Cobra Column, a local resistance force operating under the Karen National Union/Karen National Liberation Army (KNU/KNLA). The military launched several airstrikes targeting resistance forces in Lay Kay Kaw town of Myawaddy township, damaging 30 houses and a school. During the clash, the military suffered dozens of casualties, and a captain was captured by the KNU/KNLA (Radio Free Asia, 15 April 2022). These trends contribute to the 191% increase in violence in Kayin last month relative to the past year flagged by ACLED’s Subnational Threat Tracker. The Subnational Tracker first warned of increased violence to come in Kayin in the past month.

In Kayah state, a combined force of the Karenni National Progressive Party/Karenni Army (KNPP/KA) and the Karenni People’s Defense Force (KPDF) ambushed the military around Naung Pale village of Demoso township last week. In response to the ambush, the military bombed and shelled the area. Both sides suffered considerable casualties during the battle. Violence in Kayah is both common and highly volatile; it is considered an area of ‘extreme risk’ by ACLED’s Volatility and Predictability Index.

Elsewhere, in Rakhine state, fighting broke out between the military and the United League of Arakan/Arakan Army (ULA/AA) last week. Fighting occurred in Myebon township amid increasing military operations in the northern and southern townships of the state. Tensions between the military and the ULA/AA have recently increased amid ULA/AA claims that the military has been disrupting ULA/AA governance in areas now under its control (Myanmar Now, 13 April 2022). While the two groups have largely observed an informal ceasefire since shortly after the 2020 elections (Myanmar Now, 10 November 2021), sporadic clashes have been reported between the groups as recently as February of this year.

In Yangon region, the Yangon Region Military Command, operating under the National Unity Government (NUG), initiated operation ‘Nan Htike Aung’ last week, carrying out several urban guerrilla attacks against the military. These took place across eight townships over three days and included the assassination of a high-profile military officer and a shooting targeting the residences of senior generals.

Meanwhile, unidentified armed groups carried out remote attacks in the country’s major cities during military-sponsored water festivals marking the Myanmar New Year between 13 and 16 April. On 14 April, explosions occurred near military-sponsored pavilions in Yangon and Mandalay regions, injuring some civilians. Unidentified armed groups also carried out explosions in Ayeyarwady region and shootings in Kachin state on 15 April. The attacks came as protesters in Yangon, Mandalay, Sagaing, and Tanintharyi regions urged people to boycott and refrain from local celebrations.

Last week in the Philippines, fighting between the NPA and state forces extended across at least six regions – Cagayan Valley, Bicol Region, Western Visayas, Central Visayas, Soccsksargen, and Caraga. Clashes in Cagayan Valley and Soccsksargen resulted in the deaths of several militants. The increased fighting comes ahead of the presidential elections on 9 May, with the military leadership having promised an intensified anti-NPA campaign to cap President Rodrigo Duterte’s six years in office (Philippine Daily Inquirer, 9 December 2021).

In Indonesia, the TPNPB opened fire on two motorbike taxi drivers in Lumbuk village, Papua province, last week, leaving one driver dead. The rebels claim the victims were spies for state forces (Suara Papua, 13 April 2022). The TPNPB is opposed to central government activity in the region and targets people accused of working for the government, including teachers, health workers, construction workers, and public transportation drivers. This violence contributed to the 100% increase in violence in Indonesia last week relative to the past month flagged by ACLED’s Conflict Change Map, which first warned of increased violence to come in the country in the past month.

Meanwhile, thousands of students held demonstrations across Indonesia last week in response to rumors that the 2024 presidential election will be postponed (Kompas, 11 April 2022). Rumors persisted despite a statement by President Joko Widodo on 10 April that the 2024 election will be held on schedule (Kompas, 11 April 2022). Students also expressed opposition to unsubstantiated claims that the president will run for an unconstitutional third term, cooking oil scarcities, and fuel and food price increases. Demonstrations turned violent in several places, leading to multiple arrests.

In Thailand’s Deep South, the G5 — a militant group of Pattani United Liberation Organization (PULO) — detonated three bombs in Sai Buri, Pattani province on 15 April, killing a civilian and injuring three police officers. The insurgent group was excluded from recent peace talks between the Thai government and the Barisan Revolusi Nasional (BRN), in which they agreed to a ceasefire during the Muslim holy month of Ramadan (Benar News, 15 April 2022). Meanwhile, an Islamic teacher was shot and killed by an unknown gunman in Nong Chik in Pattani.

In China, demonstrations against COVID-19 restrictions escalated in Shanghai last week as a city-wide lockdown confined 25 million people at home, causing food shortages and leaving thousands in quarantine (NBC News, 15 April 2022). On 14 April, over a hundred people clashed with health authorities and police during a demonstration against the government’s stringent measures and plans to convert residential buildings into quarantine facilities. Meanwhile, reports emerged of health workers beating civilians for violating stay-at-home orders, while rioters looted a supermarket for food.

In South Korea, thousands of workers, led by the KCTU, held demonstrations on 13 April in Seoul, demanding that President-elect Yoon Suk-yeol improve labor conditions and increase the national minimum wage (YNA, 13 April 2022). Separately, a coalition of groups representing farmers and fishermen continued demonstrations opposing the country’s potential joining of the CPTPP, a free trade agreement comprising 11 countries in the region. On 15 April, the government confirmed its plans to submit its CPTPP application, despite ongoing domestic opposition to the CPTPP (YNA, 15 April 2022).

Hundreds of protesters rallied in a dozen cities across Australia last week, demanding that the government implement a fairer refugee policy. Demonstrations coincided with the announcement of the upcoming federal election, to be held on 21 May (SBS News, 10 April 2022).