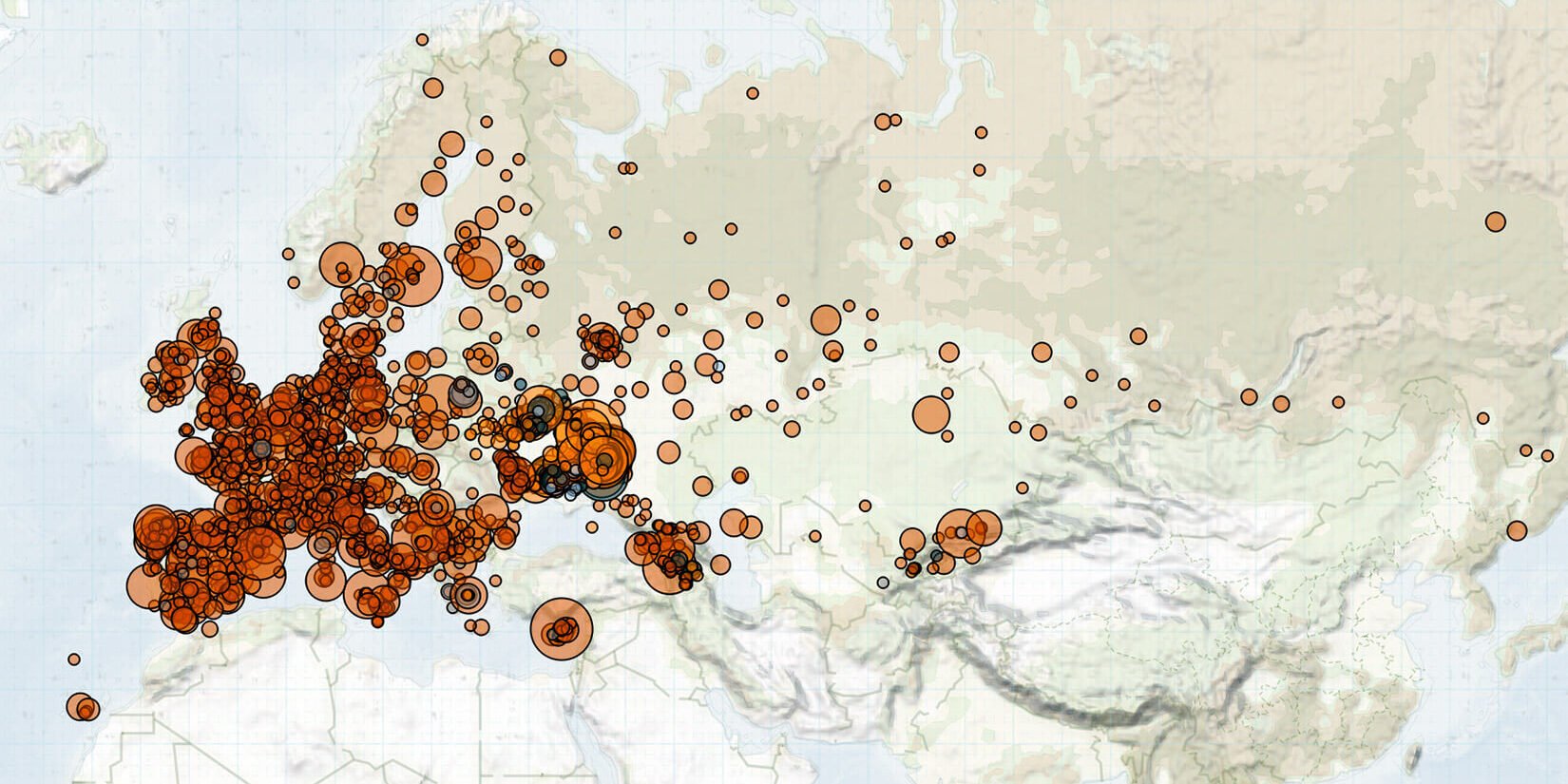 Last week in Europe, Central Asia, and the Caucasus, the Russian military invasion of Ukraine continued, as further evidence of war crimes continued to surface following the retreat of Russian forces from northern Ukraine. The ongoing invasion continued to drive demonstration activity across the region. Violent demonstrations broke out in Sweden over public Quran burnings by far-right activists. Tajik and Kyrgyz border guards engaged in a deadly clash on the Kyrgyz-Tajik border. In France, the results of the first round of the presidential elections on 10 April sparked demonstration activity and violence. In Germany, police arrested members of a far-right group for allegedly planning to carry out a series of attacks targeting the state.

In Ukraine, heavy fighting between Ukrainian and Russian forces continued in the eastern and southern parts of the country last week. Russia made no major territorial gains last week, despite sending reinforcements to eastern Ukraine following their withdrawal from the north in recent weeks (ISW, 16 April 2022). In the besieged city of Mariupol in the Donetsk region, intense fighting continued around the large Azovstal steel factory, which appears to be one of the last “strongholds” of Ukrainian forces in the city (New York Times, 18 April 2022). Amid the fighting, the Mariupol city mayor claims that at least 10,000 civilians have been killed during the ongoing Russian siege of Mariupol (AP, 12 April 2022).1Fatality numbers are frequently the most biased and poorly reported component of conflict data; they can vary considerably and are often the subject of debate given the strategic incentives to over- or underestimate these numbers, as well as the significant logistical difficulties in collecting accurate data, among other factors (for more, see this piece by ACLED in Washington Post, 2 October 2017). Russian forces also continued to launch missile attacks across Ukraine, targeting railways, airports, and civilian buildings. This violence contributed to the 118% increase in violence in Ukraine last month relative to the past year flagged by ACLED’s Conflict Change Map, which first warned of increased violence to come in the country in the past month.2Amid the ongoing invasion of Ukraine, changes in the media landscape, inaccurate or delayed reporting on active fighting, and the pullout of international monitors from the country all present difficulties for tracking political violence, especially in real time; these challenges should be taken into account when using any real-time data on this context, including from ACLED.

In the Black Sea, the Russian guided-missile cruiser ‘Moskva’ sank on 14 April. Ukraine claims to have hit the cruiser with two anti-ship missiles on 13 April, causing significant damage (Ukrayinska Pravda, 14 April 2022). Russian official sources did not corroborate Ukrainian claims, with the Russian Ministry of Defence instead stating that ‘Moskva’ sank due to an onboard fire and a heavy storm (Current Time, 15 April 2022). However, US officials have claimed that Ukrainian missiles were responsible for sinking the vessel, with other experts and analysts also suggesting that Ukraine’s claims are more plausible (Washington Post, 14 April 2022; New York Times, 15 April 2022).

In northern Ukraine, further evidence of war crimes committed by occupying Russian forces continued to emerge last week, including mass executions of civilians. Dozens of dead bodies of civilians were found in formerly-occupied areas across the Kyiv region, including in Buzova, Irpin, Borodianka, and Hostomel (ZMINA, 10 April 2022; Ukraine Crisis Media Center, 13 April 2022). The bodies of civilians, some bearing signs of torture, were also discovered last week in Lukashivka in the Chernihiv region and Husarivka in the Kharkiv region (Ukrinform, 9 April 2022; Fakty, 8 April 2022).

Russian forces also continued to abduct government officials and other civilians from occupied settlements last week. On 11 April, Russian soldiers abducted a 19-person crew of a Liberian-flagged cargo ship, including 18 Ukrainians, from the port of Mariupol and took them to an unknown destination (Ukrayinska Pravda, 11 April 2022).

Meanwhile, amid the ongoing invasion of Ukraine, multiple destructive acts targeting property owned by Russian citizens and the Russian state were recorded in Italy last week. In Castiglioncello, an unknown perpetrator threw a Molotov cocktail at a private villa belonging to a Russian couple, while a Ukrainian man sprayed the entrance of the Russian embassy in Rome with red paint (ANSA, 11 April 2022).

While anti-war protests dropped significantly in Russia last week following police interventions and attacks against anti-war activists in recent weeks, demonstrations in support of Russian troops continued. The Communist Party of the Russian Federation and regional authorities organized a series of events in support of the Russian troops, including concerts, motor rallies, and demonstrations. These events were attended mainly by public sector employees and state university students, with reports that some universities and their students were pressured to participate (RFE/RL, 15 April 2022). Meanwhile, in Germany, hundreds of pro-Moscow supporters took to the streets in several cities last week to show support for Russian operations in Ukraine and protest discrimination against Russian speakers in Germany as a result of the ongoing war (Merkur, 11 April 2022). In Ireland, a pro-Russian motorcade took place in Dublin, with cars carrying Russian flags and one of them bearing a ‘Z,’ a symbol of the Russian invasion of Ukraine (Independent, 11 April 2022).

In Sweden, violent demonstrations erupted last week after far-right Danish-Swedish activist Rasmus Paludan and his far-right party, the Hard Line (Stram Kurs, in Danish), burned a copy of the Quran during an anti-Islamic demonstration in Rinkeby. Violent demonstrations against the burning took place in cities where the far-right group planned further anti-Islamic events, including Rinkeby, Stockholm, Linköping, Norrköping, and Örebro. Rioters pelted police officers with stones and set fire to vehicles, including police and emergency services vehicles. Dozens of demonstrators were arrested, while 40 people were injured, including 26 police officers, and 20 police vehicles were destroyed (BBC, 18 August 2022). A previous Quran burning carried out by Paludan in August 2020 also led to the outbreak of violent demonstrations in Malmö.

On the border between Kyrgyzstan and Tajikistan, a deadly armed clash broke out between Tajik and Kyrgyz border guards near Maksat village in the disputed Barken region last week. One Tajik border guard was fatally wounded in the clash, which reportedly broke out when Tajik border guards crossed the border into Kyrgyz territory (RFE/RL, 12 April 2022). During the clashes, Tajik border guards also reportedly fired mortars at Dostuk village in Kyrgyzstan. The border clash triggered the displacement of about 17,000 Kyrgyz villagers from the Leylek district of the Batken region (24Kg, 13 April 2022). The latest escalation follows fighting in the border region in January that left 12 Kyrgyz citizens wounded.

In France, the first round of presidential elections on 10 April prompted demonstration activity and violence in several locations last week. Demonstrators took to the streets in several cities against the outcome of the first round of elections, in which no candidate won a majority of votes, with police deploying tear gas against demonstrators on several occasions. Meanwhile, unknown perpetrators broke a window of the Republicans party headquarters in Besancon and a window of the French Communist Party headquarters in Paris.​​ The two frontrunners of the 10 April vote, incumbent French President Emmanuel Macron and far-right National Rally (RN) party president Marine Le Pen, will go to a runoff election on 24 April (BBC, 18 April 2022).

Meanwhile, in Germany, police seized weapons and arrested four people linked to far-right and anti-coronavirus movements last week. Police accused them of planning attacks targeting the state, including the abduction of the German health minister and attacks against the country’s power supply facilities. The four allegedly belonged to a right-wing extremist chat group on Telegram, self-identifying as “United Patriots” (DW, 14 April 2022).