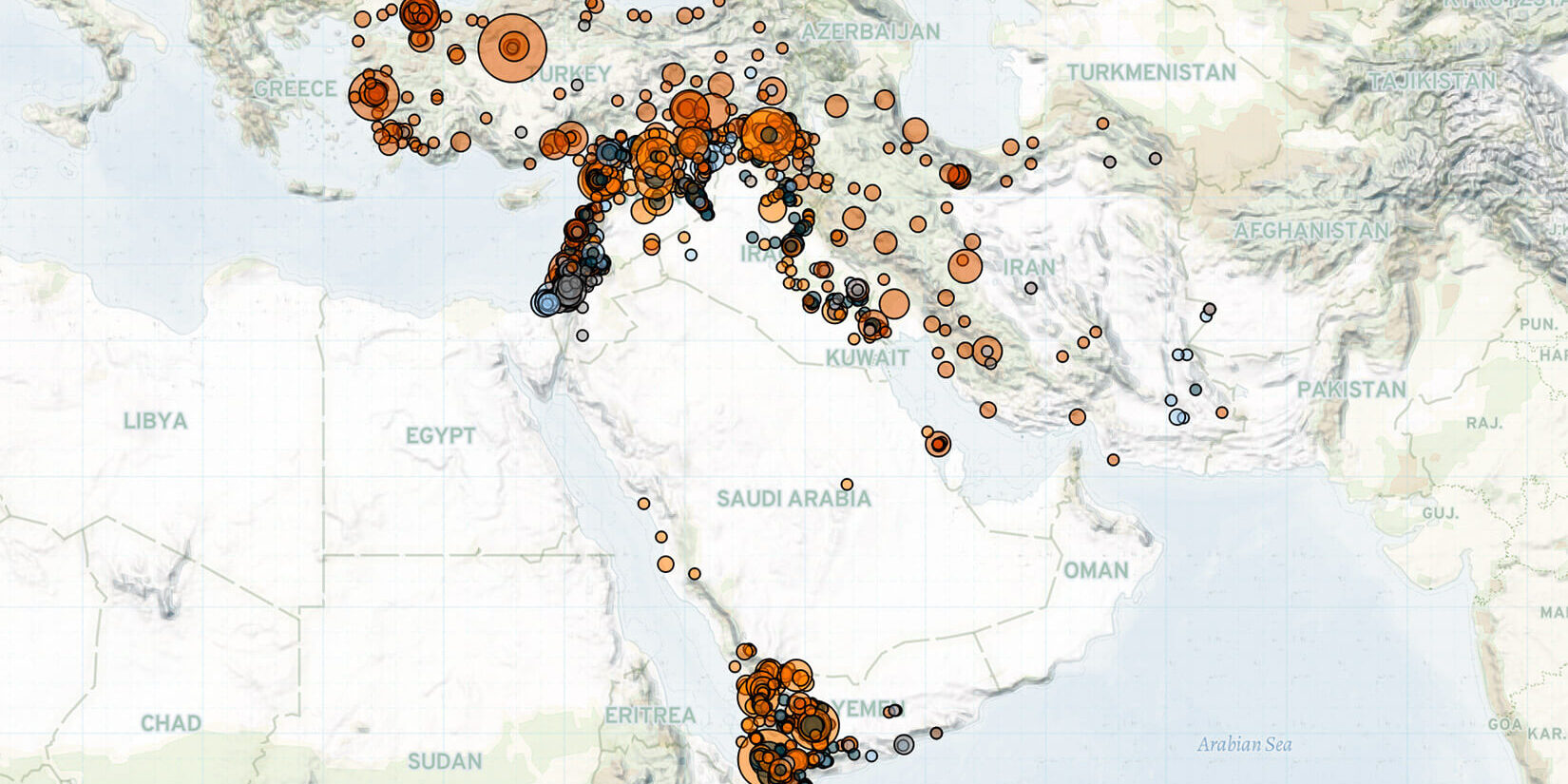 Last week in the Middle East, political violence levels remained stable in Yemen during the second week of the UN-sponsored truce, which came into effect on 2 April. In Syria, regime shelling doubled, primarily targeting opposition-controlled areas in Aleppo and Idleb provinces. In Iraq, a sermon by a preacher calling for the destruction of religious shrines triggered demonstrations and violence across the country. In Palestine, Israeli forces intervened in a gathering of Palestinian worshippers at the Al Aqsa compound in East Jerusalem, injuring over 150, and killed 12 Palestinians in clashes in the West Bank. In Israel, a Palestinian worker was killed after attempting to stab a police officer, and an Israeli Arab teenager stabbed a Jewish civilian.

In Yemen, political violence remained stable last week, with most violations of the UN-sponsored truce continuing to be reported in Hodeidah, Marib, and Taizz governorates. In Marib governorate, pro-Hadi forces claimed to have thwarted several Houthi offensives on fronts to the west and south of Marib city. Houthi forces also fired three ballistic missiles on Marib city last week, injuring residents and displaced civilians. In Hodeidah and Taizz governorates, the majority of political violence — consisting of skirmishes and the shelling of military sites and residential areas — centered on Hays and Maqbanah districts, respectively. ACLED’s Subnational Surge Tracker first warned of increased violence to come in Hodeidah and Taizz in the past month.

At the political level, UN Special Envoy for Yemen Hans Grundberg met with Houthi officials during a three-day visit last week to the Yemeni capital, Sanaa, his first visit since taking office in September 2021 (Associated Press, 11 April 2022). During a subsequent briefing to the UN Security Council, Grundberg stated his belief that there was “light at the end of the tunnel” despite continued military operations (Office of the Special Envoy of the Secretary-General for Yemen, 14 April 2022).

In Syria, regime shelling doubled last week, primarily targeting rebel-controlled areas in Aleppo and Idleb provinces. This increase in shelling was particularly pronounced in Ariha, Ehsem, Teftanaz, and Kafr Nobol districts in Idleb province. Russian airstrikes similarly increased in Idleb province, particularly in Kafr Nobol district. These strikes contributed to the 34% increase in violence in Syria last week relative to last month flagged by ACLED’s Conflict Change Map, which first warned of increased violence to come in the country in the past month.

Meanwhile, Islamic State (IS) militants continued to attack regime forces and pro-regime and pro-Iran militias, killing four pro-Iran militia fighters in the desert of Sokhneh in Homs province. IS attacks contributed to the 115% violence in Homs last week relative to last month flagged by ACLED’s Subnational Surge Tracker. The Subnational Tracker first warned of increased violence to come in Homs in the past month.

In Iraq, a preacher affiliated with the Shiite cleric Mahmoud Al Sarkhi called for the demolition of shrines to the Prophet Muhammad’s family in Babil province (Middle East Monitor, 13 April 2022), triggering anti-Al Sarkhi demonstrations and violence across the country last week. The preacher’s sermon triggered violent demonstrations in Amara, Baghdad, and Basrah cities, while arsonists set fire to offices and mosques affiliated with Al Sarkhi in Najaf, Kerbala, and Babil provinces. In response, the Iraqi Ministry of the Interior and security officials issued orders to arrest preachers and close mosques affiliated with Al Sarkhi (AlMirbad, 11 April 2022). Anti-Al Sarkhi violence contributed to the 29% increase in violence in Iraq over the past week relative to the past month that is flagged by ACLED’s Conflict Change Map.

Last week in Palestine, Israeli forces raided the Al Aqsa compound in East Jerusalem and clashed with Palestinian worshippers. During the raid at the compound in the Old City, Israeli forces clashed with hundreds of worshippers, injuring at least 158 and arresting hundreds (Al Jazeera, 15 April 2022). Police claimed the raid was launched after Palestinians threw rocks at Jewish worshippers at the Western Wall from the compound’s grounds (BBC News, 15 April 2022).

Meanwhile, in the West Bank, Israeli forces conducted a series of security operations last week in response to a Palestinian attack in Tel Aviv two weeks ago. Twelve Palestinians were killed by Israeli forces during clashes with Palestinian gunmen and rioters. This violence contributed to the 115% increase in violence in Palestine last week relative to the past month flagged by ACLED’s Conflict Change Map, which first warned of increased violence to come in Palestine in the past month.

In Israel, a Palestinian worker was shot dead by an Israeli police officer in Ashqelon last week, after the Palestinian tried to stab the officer. The stabbing attempt reportedly took place during an argument after the Palestinian failed to provide the required permit to enter and work in Israel (Al Jazeera, 12 April 2022). Elsewhere, in Haifa city, an Arab Israeli 15-year-old girl stabbed and injured a Jewish passerby in a park. Since March, 14 Israelis have been killed in four attacks by Palestinians or Israeli Arabs against civilians in Beersheba, Hadera, Beni Brak, and Tel Aviv. ACLED’s Conflict Change Map first warned of increased violence to come in Israel in the past month.