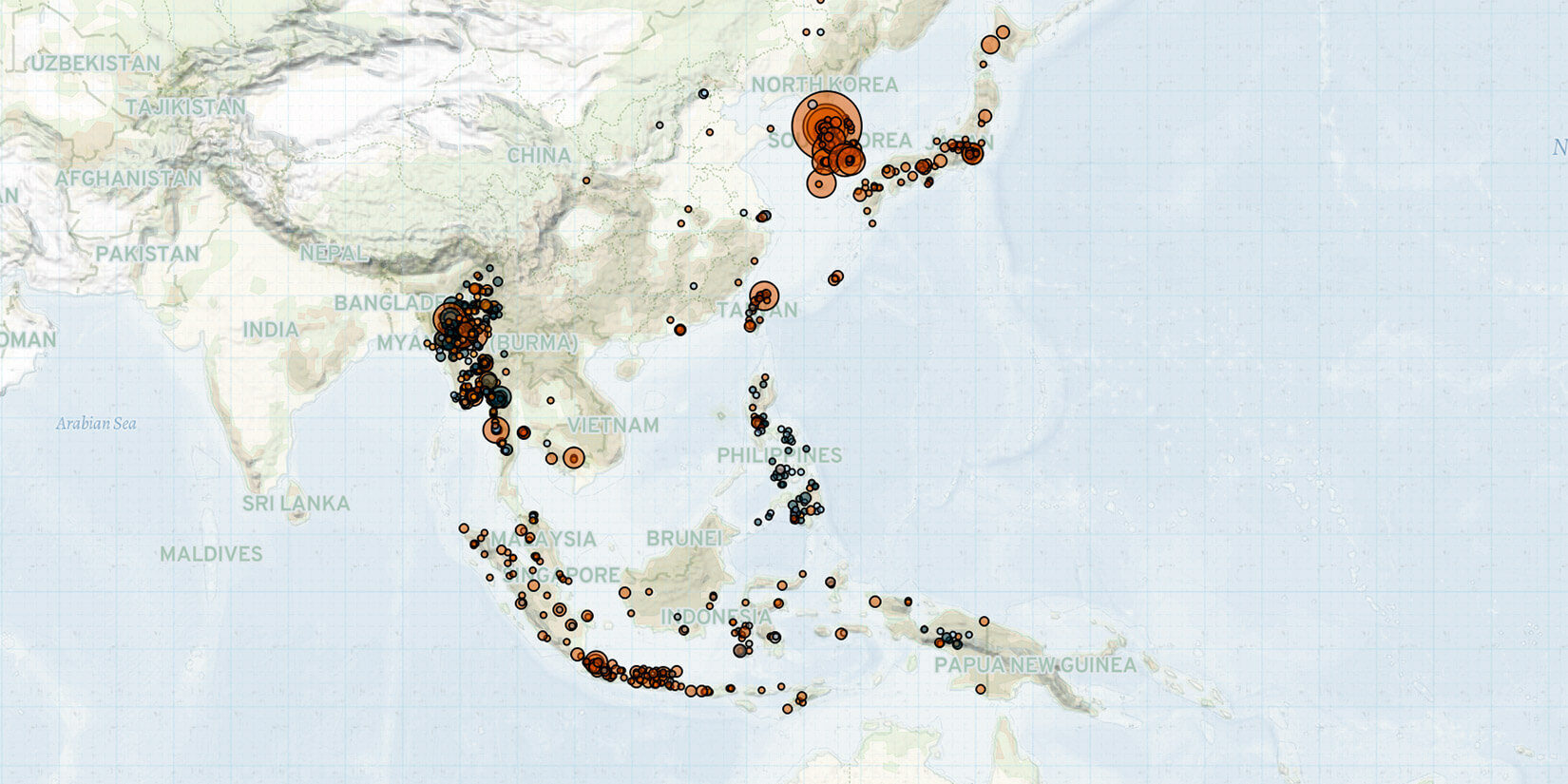 Last week in the East Asia Pacific region, local defense groups in Myanmar coordinated attacks against military bases and police stations, as the military violently suppressed anti-coup demonstrations. North Korea conducted its 13th missile test of the year. In the Philippines, security forces at a fruit plantation attacked a meeting between a leftist presidential candidate and a group of Indigenous people in Northern Mindanao during campaigning for the presidential elections to be held on 9 May. In Papua New Guinea, clashes between displaced villagers were reported in the East and West New Britain provinces. In Malaysia, a mass riot involving Rohingya detainees took place at an immigration detention center in Kedah state. In Indonesia, student demonstrations continued nationwide against the president and food price increases. In South Korea, the number of demonstration events increased as nationwide demonstrations marked the 8th anniversary of the Sewol Ferry disaster on 16 April.

In southern Mon state, fighting continued between the Karen National Union/Karen National Liberation Army (KNU/KNLA) and the military last week. In Bilin township, a combined force of the KNU/KNLA, LDFs, and PDFs attacked a military artillery base. The Karen National Defense Organization (KNDO), which is under the KNU/KNLA, issued a warning letter demanding troops from two military bases in Bilin township withdraw within three days (Myanmar Now, 21 April 2022). In Kayin state, the military advanced, shelled, bombed, and fired at KNU/KNLA positions in the Lay Kay Kaw area between 18 and 20 April. The Cobra Column, under the KNU/KNLA, responded by shelling the military the next day. The fighting comes as coup leader Min Aung Hlaing issued an invitation to the leaders of ethnic armed organizations (EAOs) to meet and discuss peace with the military or with himself directly (Radio Free Asia, 22 April 2022). These trends contribute to the 120% increase in violence in Kayin last month relative to the past year flagged by ACLED’s Subnational Threat Tracker, which first warned of increased violence to come in the state in the past month.

Meanwhile, anti-coup protests continued in Yangon, Mandalay, Sagaing, and Tanintharyi regions last week. In Yangon, soldiers drove a military vehicle into a crowd of anti-coup protesters and hit a car, before arresting three protesters inside the car. The next day, pro-democracy protesters and politicians across the country held the ‘Blue Shirt Campaign’ in memory of U Win Tin, who was one of the country’s longest-serving political prisoners, and demanded the immediate release of political prisoners (Radio Free Asia, 21 April 2022). In Sagaing region, local defense groups in Monywa, Myaung, and Kani townships carried rifles and marched alongside demonstrators, providing security to protesters. During a demonstration in Monywa township on 17 April, members of the military-aligned Pyu Saw Htee militia detained and killed five members of the Chaung-U People’s Defense Force, who were acting as look-outs during an anti-coup demonstration (Myanmar Now, 18 April 2022).

On 16 April, North Korea test-fired a new type of tactical guided weapon from Hamhung into waters off the country’s east coast (Channel News Asia, 17 April 2022). The weapon test — the 13th test this year — came ahead of North Korea’s Ministry of State Security issuing a 10-day emergency order on 17 April, putting its military in a wartime posture (RFA, 20 April 2022). Experts say the order was relayed as a countermeasure in advance of the South Korea-US joint military exercises that began on 18 April (Daily NK, 22 April 2022).

Last week in the Philippines, private security guards at a pineapple plantation fired shots at a political gathering in Quezon, Bukidnon province, Northern Mindanao region, wounding five people. The attack took place on 19 April as socialist labor leader Leody de Guzman, the presidential candidate for the Party of the Laboring Masses, met with members of the Manobo-Pulangiyon tribe to discuss their struggle to recover ancestral lands. The tribe’s ancestral lands are occupied by the pineapple plantation, which is owned by the local town mayor’s family (Philippine Star, 19 April 2022). Indigenous groups in the Philippines often face land grabbing and aggression from parties that dispute their ownership of ancestral lands (Global Witness, 18 September 2019).

Meanwhile, fighting between the communist New People’s Army (NPA) and the Philippines military intensified last week. Clashes were reported in Calabarzon, the Bicol Region, Western Visayas, Central Visayas, Caraga, and Northern Mindanao. The increased fighting comes ahead of the presidential elections to be held on 9 May, with the military leadership having promised an intensified anti-NPA campaign to cap President Rodrigo Duterte’s six years in office (Philippine Daily Inquirer, 9 December 2021). These trends contribute to the 49% increase in violence in the Philippines over the past week relative to the past month that is flagged by ACLED’s Conflict Change Map.

In Papua New Guinea, clashes erupted last week between groups of settlers in Kimbe town, who had previously been displaced by the West New Britain provincial government’s eviction order. Armed communal militias from the Gigo and Laleki settlements clashed in Kimbe, leading to two deaths and many injuries. Amid the fighting, 14 homes were burned down and 167 people were arrested (The National, 22 April 2022). Similarly, armed settlers from Matalau and Nordup clashed in Gelegele settlement in the East New Britain province after a Nordup youth was robbed by Matalau youths at a market.

Last week in Malaysia, over 500 Rohingya detainees escaped during a riot at an immigration detention center in Relau, Bandar Baharu, Kedah. Six detainees died when they were hit by a car while trying to cross a highway (The New York Times, 20 April 2022). Many of the detainees have since been re-detained. Local sources claim that the reason behind the riot might have been due to overcrowding in the detention center (Free Malaysia Today, 20 April 2022; Star Malaysia, 20 April 2022). Since 2020, the Malaysian government has taken a hard-line approach toward Rohingya refugees, prosecuting those without valid immigration passes (The New York Times, 20 April 2022).

In Indonesia, students continued to demonstrate across the country last week against unsubstantiated rumors that the president will run for an unconstitutional third term, cooking oil scarcities, and fuel and food price increases. President Joko Widodo announced a ban on palm oil exports starting from 28 April to prioritize the needs of the domestic market (Kompas, 23 April 2022).

In South Korea, the number of demonstration events increased last week compared to the week prior. The increase comes as coronavirus social distancing rules were lifted on 18 April, allowing large-scale events and rallies with more than 300 protesters (YNA, 17 April 2022). Meanwhile, on 16 April, nationwide protests were held in commemoration of the 8th anniversary of the Sewol Ferry disaster. Protesters demand further investigations into the Sewol Ferry disaster and punishment for those who were responsible for the disaster. The Sewol Ferry Disaster has been a source of regular demonstrations in South Korea in recent years (for more on this, see this recent ACLED analysis piece).