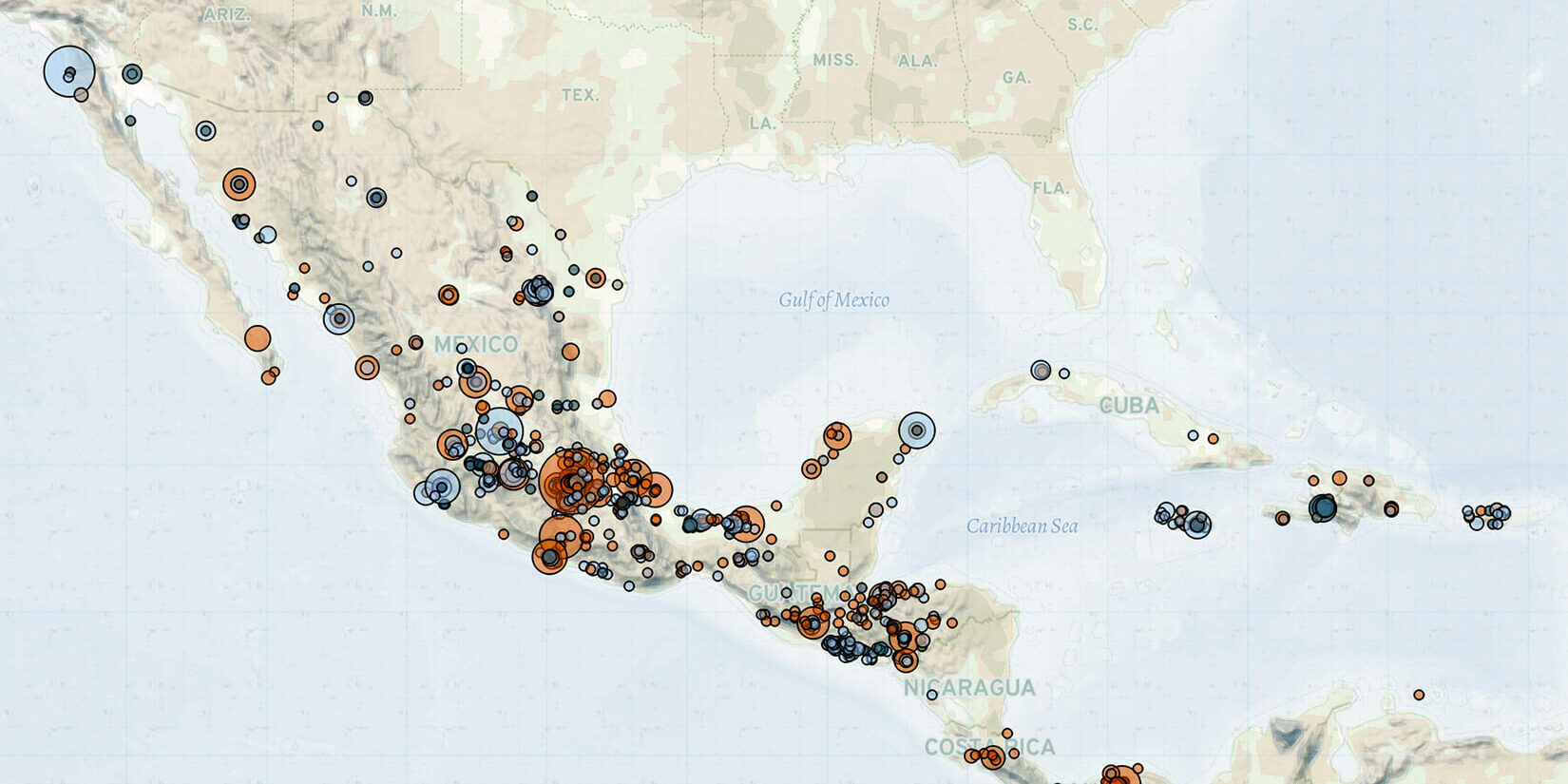 Last week in Mexico, Central America, and the Caribbean, violence increased amid anti-gang security operations in El Salvador and Haiti and conflicts between gangs in Mexico and Haiti. Meanwhile, in Mexico, unidentified armed groups carried out targeted attacks against local government officials in Tlaxcala state. In Jamaica, the killing of a civilian by military officers triggered demonstrations. In Trinidad and Tobago, violence intensified in the Diego Martin region while residents protested across the country against increasing fuel prices.

In El Salvador, political violence increased last week compared to the week prior, driven by clashes between police and gang members during anti-gang security operations. Clashes were recorded in Sonsonate, La Libertad, San Salvador, and Santa Ana departments, leaving four gang members dead. These trends contributed to the 152% increase in violence in El Salvador last month relative to the past year flagged by ACLED’s Conflict Change Map, which first warned of increased violence to come in the country in the past month.

Police and military forces have been carrying out a campaign of security operations and raids since the government declared a state of emergency on 27 March, arresting more than 15,000 suspected gang members (DW, 22 April 2022). These arrests continued across the country last week and included the arrest of a woman social leader and human rights defender in Jiquilisco municipality for allegedly collaborating with criminal groups (La Prensa Gráfica, 23 April 2022). Human rights organizations and local sources have denounced arbitrary arrests and suspicious killings during these operations (La Vanguardia, 21 April 2022).

In Haiti, police forces clashed with members of the 400 Mawozo gang and the Vitelhomme gang in the neighboring districts of Croix-des-Bouquets and Tabarre in Ouest department last week. These clashes left at least seven gang members dead and an officer injured. The 400 Mawozo gang is the dominant gang operating in Croix-des-Bouquets district and the surrounding areas (Alterpress, 10 February 2022). These clashes come after a recent government announcement of police reinforcements to carry out anti-gang operations in the metropolitan area (Fact Checking News, 23 April 2022; Ministère de la Communication, 14 April 2022). Elsewhere, in Port-au-Prince, internal conflicts in the Grand-Ravine gang triggered clashes that left several gang members dead. Local sources report that the clashes were related to disagreements over the distribution of kidnapping revenues (Metropole, 19 April 2022).

Elsewhere, in Tlaxcala state, unidentified groups carried out attacks on local government officials last week, including the kidnapping of a local government officer for ransom. Unidentified armed men also attacked the house of the local councilor for San Bernabé Capula community. The councilor claims that the attack was related to a property ownership dispute (Milenio, 22 April 2022). Such violence drove the 100% increase in violence in Tlaxcala over the past week relative to the past month, as flagged by ACLED’s Subnational Surge Tracker. Local authorities have denied the presence of gangs in Tlaxcala, instead claiming that such violence is the result of small armed groups (Quadratín Tlaxcala, 16 February 2022). Members of the political opposition, however, demand that the government recognize the operation of criminal groups in Tlaxcala (385 Grados, 19 April 2022).

In Jamaica, military officers shot and killed a man in Kingston while they were patrolling the Denham Town neighborhood on 16 April. The soldiers allege that the killing occurred after the victim tried to disarm a soldier during a security intervention (Jamaica Observer, 17 April 2022). The killing sparked demonstrations for three consecutive days, with residents barricading neighborhood roads, accusing the officers of shooting the man as he tried to defend another man that was being beaten by the officers (Jamaica Gleaner, 18 April 2022). This violence contributed to the 42% increase in violence in Jamaica last month relative to the past year flagged by ACLED’s Conflict Change Map, which first warned of increased violence to come in the country in the past month.

Although violence decreased in Trinidad and Tobago last week compared to the week prior, notable acts of deadly violence were recorded in the northern region of Diego Martin. During separate attacks, gang members shot and killed a man in Cocorite town, and armed suspects killed a police officer in Diego Martin town. While violence in Diego Martin has not been common, it has become increasingly volatile, resulting in a shift from a place of ‘low risk’ to being considered an area of ‘growing risk’ by ACLED’s Volatility and Risk Predictability Index. The latest killings come amid what police have claimed is increased gang activity in the northern area of the country (Newsday, 2 December 2021).

Meanwhile, supporters of the opposition United National Congress (UNC) protested across Trinidad and Tobago on 19 April against increasing fuel prices. Protesters condemn the government’s decision to increase the price of fuel and claim that the government is responsible for the country’s reliance on oil imports following the closure of a state-owned refinery two years ago (CNW, 20 April 2022).