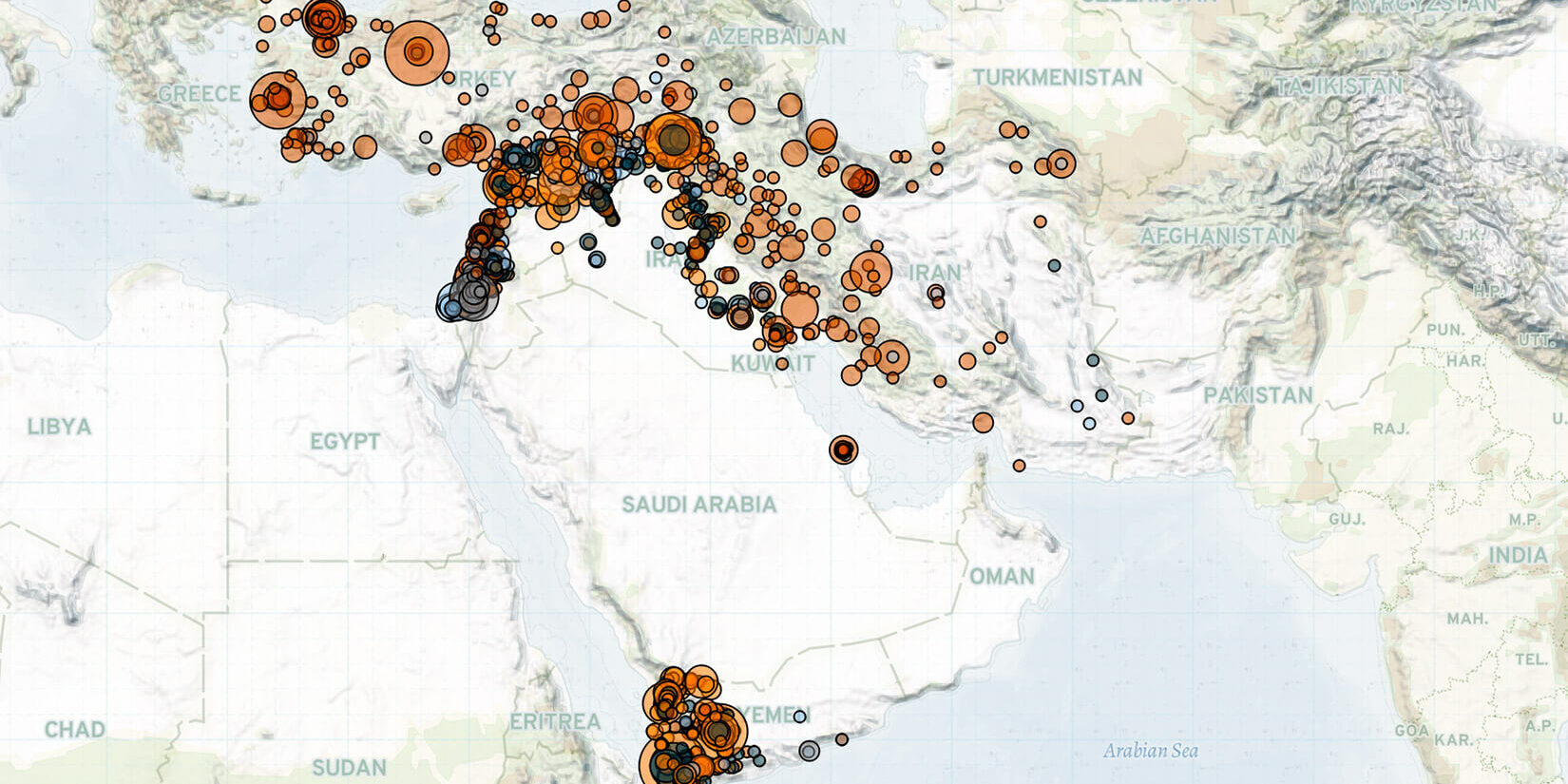 Last week in the Middle East, political violence levels decreased in Yemen during the third week of the two-month UN-sponsored truce, which came into effect on 2 April. Meanwhile, Turkey launched a large-scale operation targeting the Syrian Democratic Forces (QSD) in northern Syria and the Kurdistan Workers’ Party (PKK) in northern Iraq, with a clash between the Turkish military and the PKK also recorded in Turkey. In Palestine and Israel, Israeli security forces clashed with Palestinians in the Al Aqsa Compound as tensions in East Jerusalem continued. The clashes sparked rocket attacks from the Gaza Strip into Israel and retaliatory Israeli airstrikes against Hamas in Gaza. In Iran, teachers protested nationwide, demanding better salaries and pensions.

In Yemen, political violence decreased last week in the third week of the UN-sponsored truce, after the first two weeks saw relatively similar levels of violence in the country. Violations continue to be reported, mainly in Hays axis in Hodeidah governorate and Barh axis in Taizz governorate, as well as in Marib governorate. In Marib governorate, the number of events recorded last week decreased by half compared to the week prior, driving the overall decrease in political violence in the country. Despite this, some local observers have described fighting in Marib last week as the “fiercest” since the beginning of the truce (Twitter @Alsakaniali, 20 April 2022), as Houthi forces launched an offensive on the southern front of the governorate. Clashes between Houthi and pro-Hadi forces also took place on the western front of Marib in Sirwah district.

Meanwhile, no Saudi-led coalition air raids from fighter jets were reported for the third consecutive week last week, which was also the fourth consecutive week with no Houthi drone or missile attacks on Saudi Arabia.

At the political level, the Presidential Leadership Council was sworn in before the Yemeni parliament in Aden on 19 April to officially start running the country and to lead peace efforts with the Houthis (Associated Press, 19 April 2022). The swearing-in took place amid reports that the Saudi leadership forced President Abdrabbuh Mansur Hadi to delegate his powers to the council and that he has since been held under house arrest in Saudi Arabia (Wall Street Journal, 17 April 2022). Omani officials also traveled to Sanaa last week to discuss the truce with Houthi leaders (Xinhua, 23 April 2022).

In Syria, Russian airstrikes tripled last week, driven by an increased number of strikes targeting IS positions in Ar Raqqa and Hama provinces. These strikes contributed to the 158% increase in violence in Hama last week relative to the past month flagged by ACLED’s Subnational Surge Tracker, which first warned of increased violence to come in Hama in the past month.

In Dar’a province, attacks by unknown militants tripled last week, with over half of the attacks targeting civilians. These attacks contribute to the 104% increase in violence in Dar’a last week relative to the past month flagged by ACLED’s Subnational Surge Tracker, which  first warned of increased violence to come in Dar’a in the past month.

Meanwhile, Turkey launched a large-scale operation targeting QSD in northern Syria and the PKK in northern Iraq last week (Hurriyet, 19 April 2022). As a result of the operation, Turkish and Turkish-backed rebel shelling of QSD in Syria doubled last week in Aleppo, Ar Raqqa, and Al Hasakeh provinces. This increase was most pronounced in Al Hasakeh, where shelling events nearly quadrupled, contributing to the 147% increase in violence in the province last week relative to the past month, flagged by ACLED’s Subnational Surge Tracker, which first warned of increased violence to come in the province in the past month. In Iraq, Turkish airstrikes increased against PKK positions in Duhok, Erbil, and Ninewa provinces. The strikes in Duhok supported Turkish ground operations in various parts of Nerwa Rekan district. Turkish activity contributed to the significant increases in violence in Al Hasakeh in Syria and Duhok in Iraq over the past week relative to the past month, as flagged by ACLED’s Subnational Surge Tracker. Turkish gendarmerie forces also clashed with PKK militants in Hakkari province in Turkey, killing three militants. Hakkari borders Duhok province in Iraqi Kurdistan.

Elsewhere in Iraq, IS militants continued their attacks against civilians and Iraqi forces last week, particularly in Anbar, Diyala, and Salah Al Din provinces. In response to the attacks, the Iraqi air force increased their airstrikes in Salah Al Din province. These trends contribute to the 220% and 180% increase in violence in Anbar and Salah Al Din, respectively, over the past week relative to the past month, as flagged by ACLED’s Subnational Surge Tracker. The Subnational Tracker first warned of increased violence to come in Salah Al Din in the past month.

Last week in Palestine and Israel, tensions continued in East Jerusalem for the second consecutive week amid coinciding commemorations of Ramadan and the Jewish holiday of Passover,1Ramadan is the month in the Muslim lunar calendar in which Muhammad received his prophetic mission from Allah, according to Muslim beliefs. Observant Muslims commemorate the prophetic revelation by fasting from sunrise to sunset each day. This year it was observed starting from 2 April and it will end on 1 May (USA Today, 1 April 2022). Passover commemorates the Jewish exodus from Egypt into the Holy Land as narrated by the Tanakh. This year it was celebrated from 15 April to 23 April (Chabad.org, 25 April 2022). leading to an increase in military hostilities between Israel and Hamas. Israeli security forces accompanying Jewish visitors to the Al Aqsa/Temple Mount compound in the Old City clashed with Palestinian worshippers and rioters almost daily. Meanwhile, several hundred right-wing Israelis held a flag march last week in Jerusalem (Times of Israel, 20 April 2022), chanting anti-Arab and pro-Netanyahu slogans in response to outbreaks of violence in the Old City. Israeli police prevented the demonstrators from passing through the Damascus Gate to the Muslim Quarter in the Old City.

Rising tensions associated with the co-occurrence of Passover and Ramadan have led to the most significant escalation in violence in Israel and Palestine since the 15-day armed conflict between Israel and Hamas last year that left a dozen Israelis and hundreds of Palestinians dead. This violence contributed to the 57% increase in violence in Palestine last month relative to the past year flagged by ACLED’s Conflict Change Map, which first warned of increased violence to come in the country in the past month.

In Iran, the Coordinating Council of Teachers Syndicates organized peaceful protests across the country last week. The protesters demand the implementation of a salary ranking plan and pension payment equalization. Iranian police intervened to disperse one of these protests in Tehran city, arresting 40 demonstrators (for more on teacher demonstrations in Iran, see this ACLED infographic).