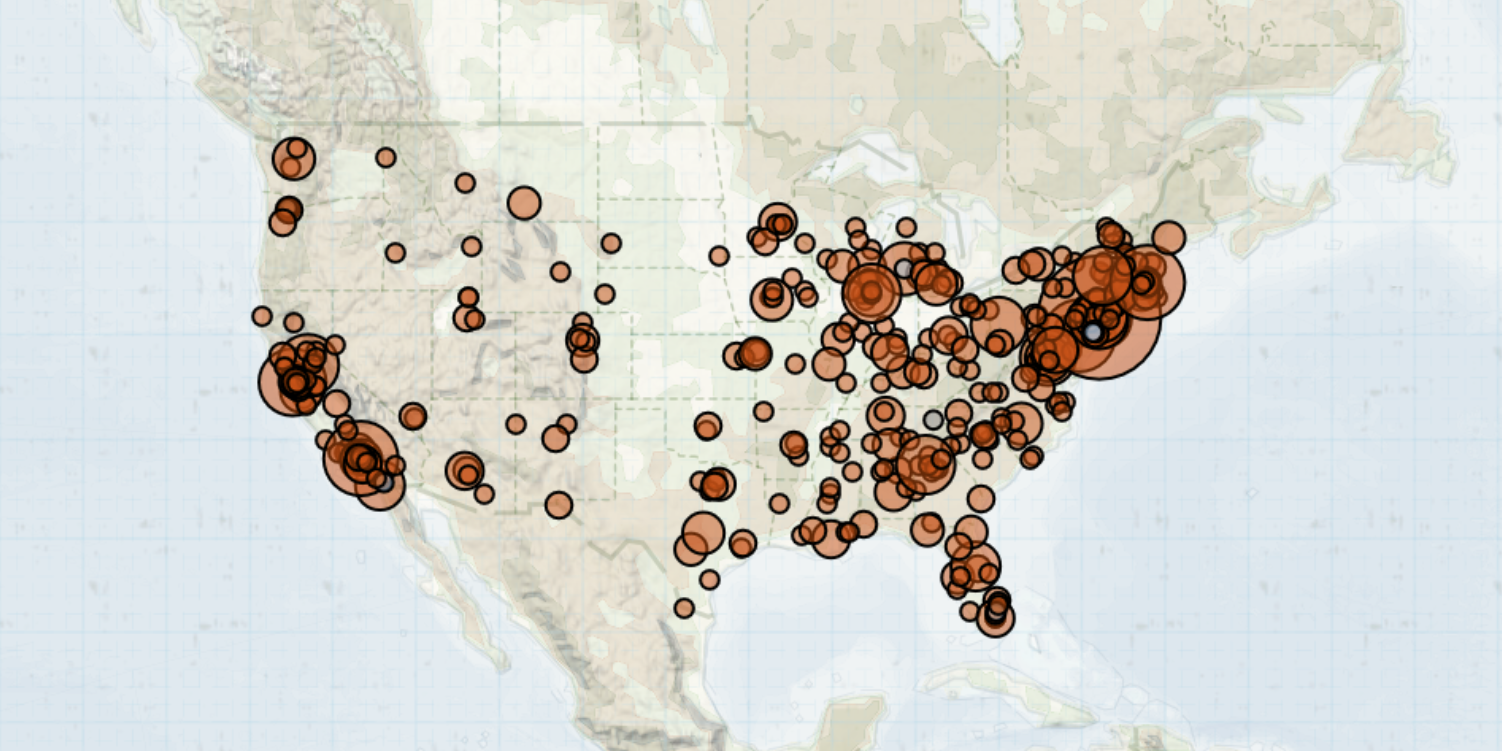 Demonstration levels remained steady in the United States while declining moderately in Canada last week. Demonstrations calling for action to address the climate crisis rose significantly in both countries, coinciding with the commemoration of Earth Day on 22 April. Demonstrations in support of the Black Lives Matter (BLM) movement increased in the United States during the week, while an increase in militia, militant social movement, and white nationalist activity was reported as well.

In the United States, demonstrations by labor groups constituted the largest proportion of demonstration events last week. On 18 April, nurses at Sutter Health staged a one-day strike demonstration — organized by the California Nurses Association and their national affiliate, National Nurses United — in at least 11 cities in California. They called for improved working conditions amid COVID-19-related staffing issues. These events accounted for the plurality of labor-related demonstrations in the United States during the week.

Demonstrations involving environmental groups spiked in the United States last week as well — making up the second-largest share of demonstration events — coinciding with the commemoration of Earth Day on 22 April. It marked the highest number of environmental events since the week of the 2021 Global Climate Strike last September, as well as Extinction Rebellion’s most active week in the country in over two years. Notably, an environmental activist died after he set himself on fire outside of the Supreme Court in Washington, DC, with evidence suggesting his death was meant as an act of protest to draw attention to climate change (New York Times, 24 April 2022).

Meanwhile, demonstrations in support of the BLM movement increased moderately. This was largely the result of demonstrations against the fatal police shooting of Patrick Lyoya, a refugee from the Democratic Republic of Congo. Lyoya died on 4 April when an officer shot him in the back of the head while he was lying face down after a struggle during a traffic stop. One of these demonstrations turned destructive, with demonstrators in Portland, Oregon committing various acts of vandalism on 16 April, including spray-painting the words ‘ANTIFA’ and ‘revenge is coming’ on two banks, smashing windows, shooting fireworks at a Starbucks, and lighting a dumpster on fire outside the police department’s North Precinct.

On 22 April, a lone gunman using a “sniper-type setup” opened fire on people in northwest Washington DC, injuring four. During the shooting, the gunman posted livestreams to 4chan and expressed anti-Black sentiment online (Twitter @LCRWNews, 23 April 2022). The gunman killed himself later in the evening. Nearby, campus operations at Edmund Burke School and the University of the District of Columbia were interrupted as a security precaution, although it is unclear if the schools were targeted by the shooter (Washington Post, 23 April 2022; Washington Post, 22 April 2022).

Threats of violence against schools continued across the United States last week. On 18 April, violent threats were reported against Northside High School, a majority-Black school in Warner Robins, Georgia, and against Irvine High School, a majority-Asian school in Irvine, California. Police later determined that the threat against Irvine High School was an attempted ‘swatting’ call to provoke a large tactical police response (KTLA5, 18 April 2022). In the following days, on 21 April, campus operations were disrupted due to violent threats at the University of California at Berkeley, and at three high schools in Louisiana: Benton, North DeSoto, and Northwood High Schools. Police investigations into these incidents all concluded that there were no credible threats. It is unclear if any of the incidents are related to the wider series of threats against Historically Black Colleges and Universities (HBCUs) and Black majority K-12 schools since the end of January (for more on the spike in threats against HBCUs and Black-majority schools, see this ACLED fact sheet).

Activity related to a recent uptick in legislation aimed at restricting LGBT+ rights in multiple states continued last week (NPR, 10 April 2022). On 16 April, QAnon adherents participated in a demonstration alongside several Republican Party members at Disney World in Orlando, Florida against the Walt Disney Company’s opposition to Florida’s ‘Don’t Say Gay’ bill. This follows previous weeks of demonstrations in Florida and California over the company’s opposition to the ‘Don’t Say Gay’ legislation, which aims to prevent discussion of the LGBT+ community in kindergarten through third grade (Washington Post, 1 April 2022).

Meanwhile, a gay man was attacked while walking his dog in Fort Lauderdale, Florida on 17 April. A man approached him and asked if he was gay, and when he responded affirmatively, the man proceeded to punch him. A man was arrested for aggravated battery in relation to the incident (Local 10 News, 19 April 2022). Notably, the number of recorded attacks against the LGBT+ community in the United States this year has already exceeded the total number of attacks reported last year.1ACLED only tracks cases of serious physical violence that are reported to be solely politically rather than interpersonally motivated. This is a limited subset of all violence against the LGBT+ community at large.

Reported militia and militant social movement activity increased last week as well. On 18 April, Veterans on Patrol (VOP) conducted a patrol along the border with Mexico in Arizona and claimed to have encountered 39 migrants from Nicaragua, Honduras, and Guatemala. It is unclear if they detained these migrants and turned them over to US Border Patrol as they have done in previous patrols.

In Sacramento, California, Proud Boys participated in demonstrations alongside the ‘People’s Convoy’ against pandemic-related public health restrictions and vaccine mandates on 18 and 20 April. Elsewhere, on 21 April, Proud Boys participated in a demonstration in support of former President Donald Trump outside a Portland, Oregon event where President Joe Biden was speaking.

Finally, on 16 April in Lakeside, California, a group of at least five people yelled racist and sexist slurs at a Black teenager before beating her with a metal rod and stabbing her in the back. At least one member of the group is reported to have ties to the Lakeside Gangsters, which the San Diego Law Enforcement Coordination Center has designated as a ‘White Racially Motivated Violent Extremist Group’ (Left Coast Right Watch, 22 April 2022; San Diego County Sheriff’s Department, 18 March 2021). Demonstrators, including at least one member of the Black Panther Party, have gathered in Lakeside to protest police “inaction” around racism in their community. Two white teenagers have since been arrested in connection to the attack on charges that include attempted murder and hate crimes (Left Coast Right Watch, 22 April 2022; KPBS 25 April 2022). Demonstrators, however, claim that the incident is indicative of anti-Black sentiment in Lakeside and that the Black community faces “unequal application of the law,” alleging authorities declined to pursue all of the people involved in the incident and were initially reticent to treat the case as a hate crime (KPBS, 22 April 2022).

On 16 April in Ottawa, a group of at least five Muslim men were attacked in a drive-by shooting in Scarborough, Ontario. The men were heading to a parking lot near a mosque after attending midnight Ramadan prayers and were shot at in what appears to have been a random attack, according to police, who “do not believe the shooting was hate-motivated” (CTV, 22 April 2022). All of the victims survived the attack.

Update, 15 June 2022: This Regional Overview has been updated to clarify that the number of recorded attacks against the LGBT+ community in the United States this year has already exceeded the total number of attacks reported last year, not the last two years.