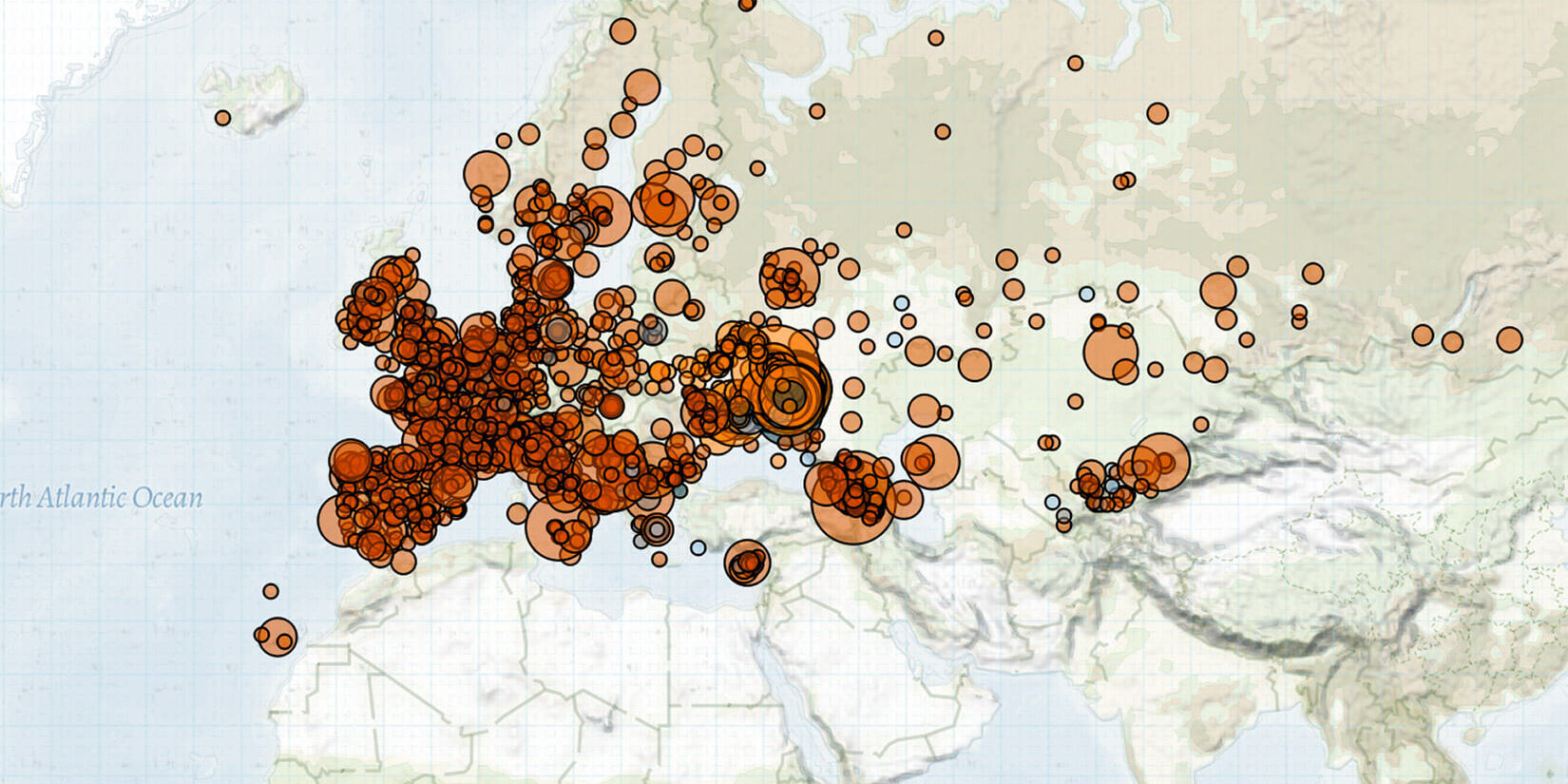 A number of new developments took place during the last two weeks in Europe, Central Asia, and the Caucasus. Russian forces continued their invasion of Ukraine, inciting anti-war demonstrations across the region. Meanwhile, Russian regional authorities and separatist authorities in Transnistria in Moldova accused Ukraine of firing at their territory. A statement from the Armenian Prime Minister Nikol Pashinyan regarding Artsakh sparked anti-government demonstrations in Armenia. Demonstrations to mark International Workers’ Day on 1 May were prevalent across the region. Demonstrations against police violence occurred in France and Germany, as French President Emmanuel Macron was re-elected for a new five-year term.

In Ukraine, heavy fighting between Russian and Ukrainian forces continued in the eastern and southern regions of Ukraine over the past two weeks. During this period, over two-thirds of all political violence in the country was recorded in the eastern regions of Donetsk, Luhansk, and Kharkiv.1 Amid the ongoing invasion of Ukraine, changes in the media landscape, inaccurate or delayed reporting on active fighting, and the pullout of international monitors from the country all present difficulties for tracking political violence, especially in real time; these challenges should be taken into account when using any real-time data on this context, including from ACLED. The city of Mariupol in the Donetsk region remains under siege, with Ukrainian servicemen and civilians trapped in the Azovstal plant. Russian troops continue their daily bombardment of the plant and reportedly entered the plant on 4 May, instigating heavy battles (The Guardian, 5 May 2022). Russian forces also intensified attempts to advance in the Luhansk region yet failed to capture new territories. In the meantime, following clashes with Russian troops, Ukrainian forces managed to regain control over a dozen settlements in the Kharkiv region. Additionally, Ukrainian forces carried out several successful attacks on Zmiinyi Island, off the southern coast of the country, part of the region of Odesa, killing dozens of Russian soldiers (5 Kanal, 1 May 2022). These trends contribute to the 140% increase in violence in the Odesa region last week relative to the past month flagged by ACLED’s Subnational Surge Tracker, which first warned of increased violence to come in the Odesa region in the past month.

Russian missile attacks continued across Ukraine over the past two weeks, often targeting civilian infrastructure and wounding civilians. On 25 April, Russian forces carried out two deadly missile attacks in the Vinnytsia region (24 Channel, 25 April 2022). Russian shelling of frontline locations has resulted in deaths of over a hundred civilians in the last two weeks,2Fatality numbers are frequently the most biased and poorly reported component of conflict data; they can vary considerably and are often the subject of debate given the strategic incentives to over- or underestimate these numbers, as well as the significant logistical difficulties in collecting accurate data, among other factors (for more, see this piece by ACLED in Washington Post, 2 October 2017). including 10 people killed during the shelling of a coke plant in Avdiivka in the Donetsk region on 3 May (RFE/RL, 3 May 2022). Additionally, at least five people were killed in landmine explosions in the north and east of the country.

Russian forces also continued to shell evacuation routes from occupied territories. After multiple failed attempts to evacuate civilians from the Azovstal plant in Mariupol, hundreds of civilians managed to leave the city last week (The Guardian, 5 May 2022). However, despite announcing a ceasefire, Russia opened fire on Ukrainian soldiers who were helping civilians to evacuate (The Times, 7 May 2022). Similarly, Russian forces shelled evacuation buses in the Luhansk and Kharkiv regions; on 4 May, Russian soldiers fired at a column of civilian vehicles evacuating from Vovchansk in the Kharkiv region, killing four people (Suspilne Media, 6 May 2022).

In Russia, authorities of the regions bordering Ukraine reported new explosions and shelling incidents in their territory over the past two weeks. They accused Ukrainian forces of attacking Russian border regions while also attributing some of these incidents to the Russian air force carrying out combat tasks across the border with Ukraine (Obozrevatel, 5 May 2022; Novaya Gazeta, 30 April 2022; 2 May 2022). Ukrainian President Volodymyr Zelenskyi denied the involvement of Ukrainian forces in any operations on Russian territory (Kommersant, 3 May 2022). These trends contribute to the 243% increase in violence in the Belgorod border region last week relative to the past month flagged by ACLED’s Subnational Surge Tracker; the tool first warned of increased violence to come in Belgorod in the past month.

Similarly, in Moldova, the Transnistrian region has seen multiple attacks perpetrated by unknown groups over the past two weeks, although they did not lead to casualties or significant damage to property. These attacks included a rocket-propelled grenade (RPG) attack on the separatist Transnistrian security ministry building in Tiraspol on 25 April, a remote explosion targeting two radio antennas near Maiac on 26 April, and an attack on an ammunition depot in Cobasna on 27 April. Additionally, unidentified groups carried out two drone attacks on former airfields in Tiraspol and Vărăncău. Transnistrian separatist authorities claim that the attacks were perpetrated by individuals coming from Ukraine and demand that the Ukrainian government start an investigation into the attacks (Reuters, 4 May 2022; IPN; 26 April 2022). Ukrainian and Moldovan authorities, however, suggest that pro-Russia groups in the region staged the attacks to incite tensions (RFE/RL, 25 April 2022; RFE/RL, 26 April 2022). On 26 April, the separatist administration introduced a 15-day-long “red terrorism alert,” canceling all public events and limiting the movement of people within and from the region (Zona de Securitate, 27 April 2022). ACLED’s Conflict Change Map first warned of increased violence to come in Moldova in the past month.

In Armenia, opposition parties organized around 50 anti-government demonstration events in the past two weeks after Prime Minister Pashinyan claimed that the international community expects Armenia to scale down its demands regarding Artsakh (News Am, 13 April 2022). Members and supporters of Armenian opposition parties took to streets across the country to demand the resignation of the government and warn authorities against concessions to Azerbaijan over Artsakh. Almost half of the events were met with police intervention, with police arresting and sometimes beating participants.

Meanwhile, in France, hundreds of people gathered in Paris to demonstrate against police violence last week, after a police officer shot dead two men who tried to escape police control in Paris on 24 April (France Bleu, 4 May 2022). Police officers also staged demonstrations in dozens of locations across the country to demand the presumption of self-defense for officers accused of causing injuries to people while on duty, after their colleague was charged with intentional homicide (RFI, 2 May 2022). Demonstrations against police violence were also recorded in Germany, where a man died after being stopped by police in Mannheim on 2 May. Videos circulating online show an officer hitting the man’s head as he lay on the ground. An investigation into the man’s death is ongoing (DWM, 3 May 2022).

In France, on 24 April, French President Macron was re-elected for a five-year term, defeating far-right National Rally (RN) candidate Marine Le Pen, who conceded defeat but hailed a “shining victory” after garnering an unprecedented 41.55% of the vote (BBC News, 25 April 2022; France 24, 25 April 2022). Following the release of the results in the evening, far-left demonstrations — denouncing both Macron’s re-election, as well as the unprecedented performance of the far-right given the votes received by Le Pen — were recorded in at least a dozen cities. In Paris, Lyon, Rennes, Toulouse and Nantes, and Caen in Normandie, demonstrators, including anti-fascist and far-left activists, clashed with police forces. While violence in Normandie has not been common, it has become increasingly volatile, resulting in a shift from a place of ‘low risk’ to being considered an area of ‘growing risk’ in the past month by ACLED’s Volatility and Risk Predictability Index. ACLED’s Conflict Change Map first warned of increased violence to come in France in the past month.