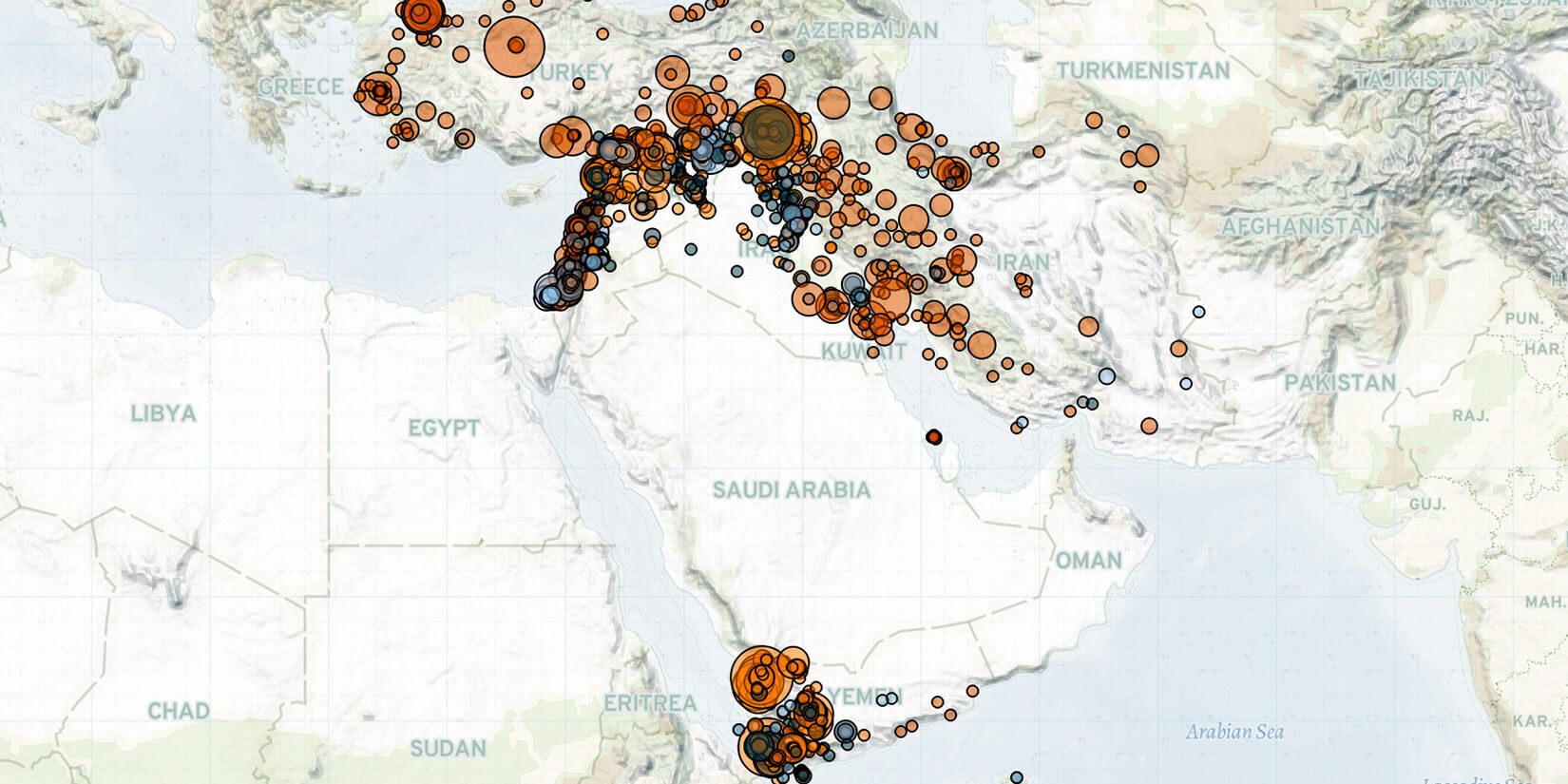 Last week in the Middle East, conflict events increased in Yemen ahead of the end of the first phase of the UN-sponsored truce, which has now been extended for another two months. In Syria, violence declined significantly following a two-week surge. In Iraq, fighting between the Kurdistan Workers’ Party (PKK) and Turkish forces remained at heightened levels despite an overall decrease in activity. Meanwhile, deadly clashes between Turkish forces and the PKK continued in Turkey. In Iran, suspected Israeli Mossad agents assassinated an Islamic Revolutionary Guard Corps (IRGC) officer. In Palestine, Israeli forces killed three Palestinians in separate clashes in the West Bank, including a member of the Palestinian Islamic Jihad (PIJ).

In Yemen, violence increased last week going into the last full week of the first phase of the truce (for more, see ACLED’s Yemen Truce Monitor). The increase was primarily driven by events in Sadah governorate, where Houthi forces reported pro-Hadi shelling on Saudi-Yemen border areas. ACLED’s Subnational Surge Tracker warned of increased violence to come in Sadah in the past month. Skirmishes between Houthi and anti-Houthi forces also took place last week in Hajjah, Hodeidah, Marib, Shabwah, and Taizz governorates. In Taizz governorate, “unprecedented” Houthi reinforcements of around 65 vehicles were reportedly deployed (Yemeni Army, 23 May 2022).

Elsewhere, Saudi-led coalition drone strikes contributed to the 129% increase in violence in Ad Dali governorate last month relative to the past year flagged by ACLED’s Subnational Surge Tracker, which warned of increased violence to come the week prior. In Sanaa, Houthi forces claim that three civilians were killed and three were injured from the fall of a Saudi reconnaissance drone they shot down over the city (Yemen News Agency, 24 May 2022). Despite this, no Saudi-led coalition air raids from fighter jets were reported for the eighth consecutive week last week, and no Houthi drone or missile attacks on Saudi Arabia for the ninth consecutive week.

In Iraq, overall levels of violence decreased last week, with fighting between Turkish forces and the PKK slightly declining for the second consecutive week. Despite this decrease, Turkey’s Operation Claw Lock, which mainly targets Dohuk province, continued to contribute to the 200% increase in violence in Duhok last month relative to the past year, as flagged by ACLED’s Subnational Threat Tracker. The Tracker first warned of increased violence to come in Duhok in the past month.

Last week in Iran, suspected Israeli Mossad agents assassinated an IRGC officer from Unit 840 in Tehran city. The officer had reportedly participated in Iranian operations in Syria and oversaw other covert operations, including the alleged abduction of Israelis (The Times of Israel, 26 May 2022). Elsewhere, the IRGC seized two Greek tankers near the Strait of Hormuz in retaliation for the seizure of an Iranian vessel by Greek and US forces last month (RFE/RL, 28 May 2022).

In Turkey, deadly clashes between the PKK and Turkish forces continued to be recorded last week. Turkish gendarmerie forces killed four members of the PKK in separate security operations in Osmaniye and Sirnak provinces, including a reportedly high-ranking PKK figure (Haber 7, 24 May 2022). Meanwhile, PKK militants killed four Turkish soldiers during clashes in Judi mountain in Sirnak province, which borders Syria and Iraq. Lastly, members of the Civil Protection Units (YPS) – an affiliate of the PKK – shot and killed a man in Batman town for allegedly collaborating with Turkish police (ANF News, 27 May 2022).