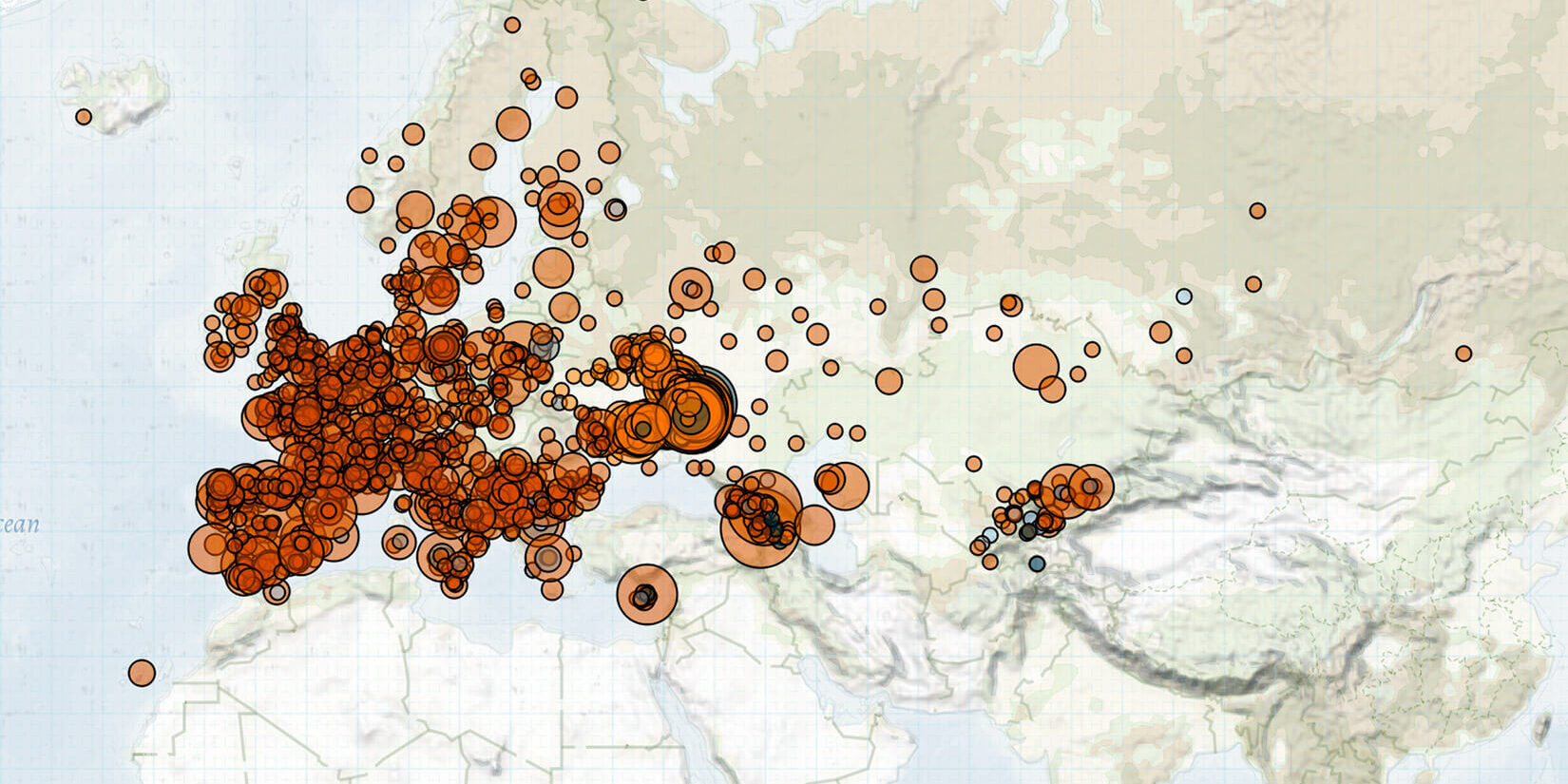 Last week in Europe, Central Asia, and the Caucasus, Ukrainian forces withdrew from Severodonetsk as the Russian military invasion of Ukraine continued. Demonstrations in solidarity with Ukraine continued to be reported in several countries, while demonstrations in support of European Union (EU) integration broke out in Georgia as the EU granted candidate status to Ukraine and Moldova. LGBT+ Pride marches continued across Europe against the backdrop of several violent events targeting members of LGBT+ communities. In Germany, unknown assailants set fire to police vehicles ahead of the G7 Summit in Bavaria from 26 to 28 June. Meanwhile, fighting continued along the Armenia-Artsakh-Azerbaijan Line of Contact.

In Ukraine, fighting between Russian and Ukrainian forces continued last week. In the Luhansk region, heavy clashes continued in Severodonetsk until 24 June, when Ukrainian forces were ordered to withdraw from the city (BBC News, 24 June 2022). Following the occupation of Severodonetsk, Russian forces began their assault in the direction of Lysychansk, the last large city in the Luhansk region under Ukrainian control (NV, 23 June 2022). Russian troops also continued unsuccessful offensive operations north of Slovyansk in the Donetsk region and south and west of Izium in the Kharkiv region in order to surround the Ukrainian forces in Lysychansk (ISW, 24 June 2022).

In the Black Sea, Ukrainian forces struck Russian positions on Zmiinyi Island (Snake Island), inflicting losses on the Russian side (Ukrinform, 22 June 2022). In response to Ukrainian strikes, Russia reportedly deployed additional air defense and rocket group units, as well as special forces to the island (ISW, 23 June 2022). Ukrainian forces also shelled drilling rigs in the Black Sea, seized by Russia during the occupation of Crimea in 2014, causing fires on the rigs. Ukraine claims that Russia has been using the rigs not only for drilling but also for surveillance (New York Times, 22 June 2022).

Meanwhile, Russian forces continued to target civilian infrastructure across Ukraine last week. Over 50 civilians were killed in Russian shelling, missile attacks, and airstrikes in the eastern, central, and southern regions of the country.1Fatality numbers are frequently the most biased and poorly reported component of conflict data; they can vary considerably and are often the subject of debate given the strategic incentives to over- or underestimate these numbers, as well as the significant logistical difficulties in collecting accurate data, among other factors (for more, see this piece by ACLED in Washington Post, 2 October 2017). This violence contributed to the 26% increase in violence in Ukraine last week relative to the past month flagged by ACLED’s Conflict Change Map; the tool first warned of increased violence to come in the country in the past month.2Amid the ongoing invasion of Ukraine, changes in the media landscape, inaccurate or delayed reporting on active fighting, and the pullout of international monitors from the country all present difficulties for tracking political violence, especially in real time; these challenges should be taken into account when using any real-time data on this context, including from ACLED.

Demonstrations in solidarity with Ukraine and against the war took place in Germany, Italy, Malta, Poland, and Sweden last week.

On 23 June, the EU granted Ukraine and Moldova candidate status, the next step towards EU membership, after EU integration talks were expedited following the full-scale Russian invasion of Ukraine (DW, 23 June 2022). The promotion of Ukraine and Moldova to EU candidate states sparked demonstrations in Georgia in support of the country’s EU integration. Tens of thousands of people rallied in Tbilisi on 20 and 24 June, demanding EU candidate status for Georgia, which also suffered from Russian military aggression in 2008 (RFE/RL, 24 June 2022). Smaller demonstrations were organized across the country, with some demonstrators also expressing anti-government sentiments.

Several attacks targeting members of the LGBT+ community were reported in the region last week amid the ongoing commemoration of LGBT+ Pride Month. In Norway, a man opened fire outside an LGBT+ venue in central Oslo, killing two people and wounding 21 others before being detained by police (Aftenposten, 25 June 2022). In a press statement, Norway’s intelligence service said that the suspected shooter was known to the police as a potentially radicalized Islamist, though the degree of ideological motivation in the shooting is yet to be confirmed (NRK, 25 June 2022). Oslo’s Pride parade, which was planned for the same day, was called off following the attack (NPR, 25 June 2022). In Italy, on 23 June, unidentified individuals set several kiosks at a swimming pool complex on fire in Misano Adriatico in Rimini province. The owner, a prominent member of the local LGBT+ community, claims it was a homophobic attack. The venue had recently displayed pride symbols and is a popular weekend venue for the LGBT+ community (Rimini Today, 23 June 2022; Rimini Today, 23 June 2022). In Germany, on 21 June, two members of the LGBT+ community were beaten, kicked to the ground, and had their pride flag torn as they returned from Christopher Street Day celebrations in Augsburg (Merkur, 24 June 2022).

On 20 June, on the occasion of World Refugee Day, rallies calling for better access to jobs and housing solutions for asylum seekers were recorded in Denmark, France, Germany, Malta, Poland, and Spain.

In the Netherlands, after two weeks of regular and widespread protests, which also rippled across the border in Belgium (notably in Flanders), farmers’ discontent with the Dutch government’s plans to cut nitrogen emissions culminated in a mass demonstration in North Holland province last week. Up to 40,000 farmers with thousands of tractors from across the country met on 22 June around Stroe to demand the scrapping of the recently announced measure. The leaders of the protest movement claim that the planned cuts, which are set as high as 95% in some provinces, will impose significant reductions on livestock and the closure of small farms (France 24, 22 June 2022; Bloomberg, 28 June 2022).

In Germany, unidentified assailants set fire to eight police vehicles parked in front of a hotel hosting members of the G7 security task force in Munich last week, ahead of the G7 Summit at Elmau Castle from 26 to 28 June. While several anti-G7 activists condemned the attack, police authorities declared that they suspect a strong link between the arson attack and the G7 Summit (Merkur, 22 June 2022).

Along the Armenia-Artsakh-Azerbaijan Line of Contact, ceasefire violations increased last week. Azerbaijani positions reportedly came under Armenian fire in the Shahumyan, Kalbajar, and Kashatagh regions. This violence contributed to the 256% increase in violence in Azerbaijan and Artsakh3The disputed territory of Nagorno-Karabakh is internationally recognized as part of Azerbaijan. ACLED refers to the de facto state and its institutions as Artsakh — the name by which the de facto territory refers to itself. For more on methodology and coding decisions around de facto states, see this methodology primer. last week relative to the past month flagged by ACLED’s Conflict Change Map, which first warned of increased violence to come in the region in the past month. One Armenian serviceman was killed during fighting in the Gegharkunik region of Armenia. Additionally, an Azerbaijani civilian was hospitalized as a result of a mine incident in the Hadrut province.