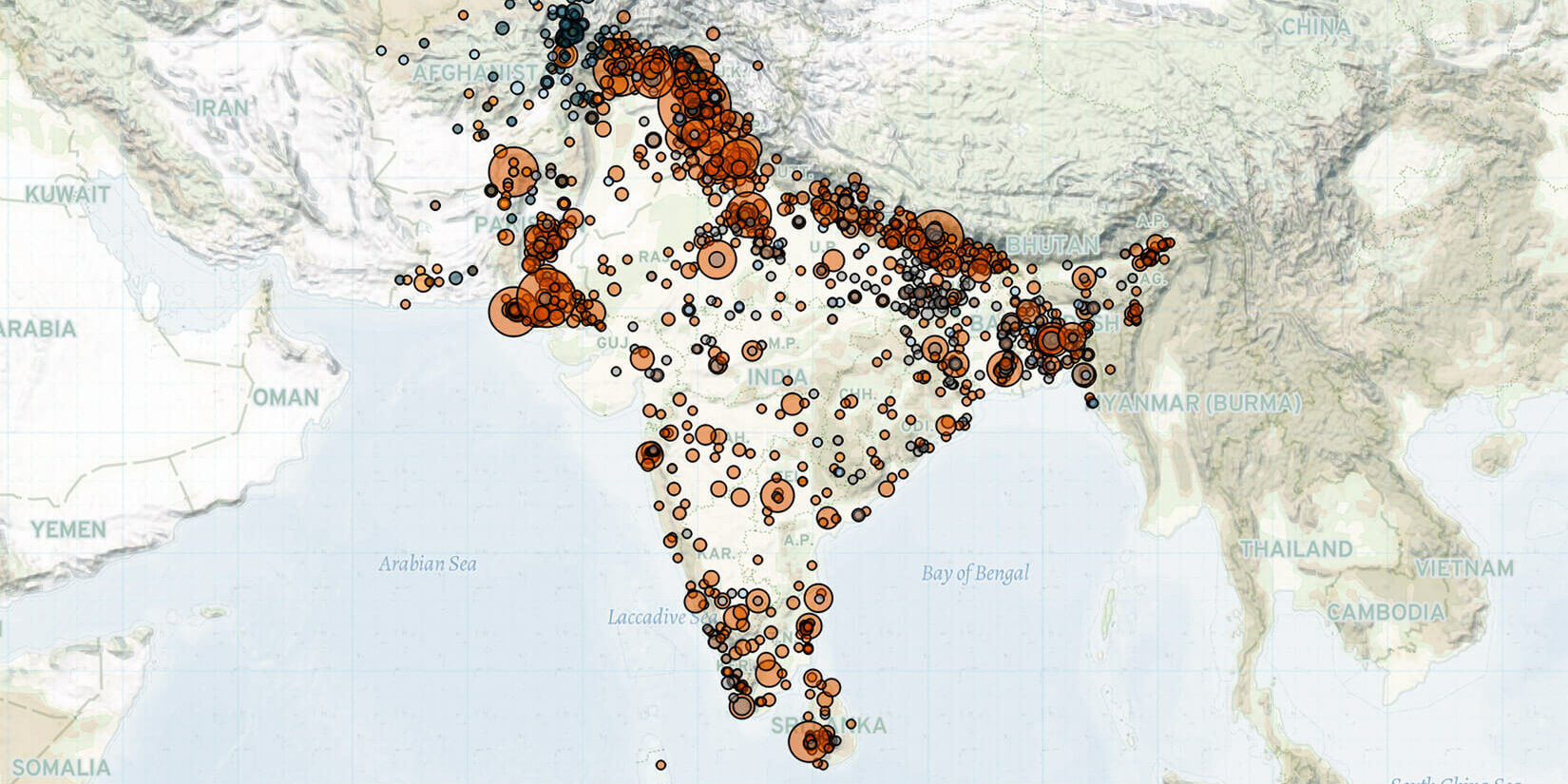 Last week in South Asia and Afghanistan, the Islamic State (IS) attacked Taliban forces and targeted a Sikh temple in Kabul city in Afghanistan. Taliban forces continued to clash with the National Resistance Front (NRF); Taliban infighting also took place across the country, as did clashes with the forces of a former Taliban commander in Sar-e Pol province. In Pakistan, Baloch separatists continued to target state forces and civilians in Balochistan province, while IS and unknown groups engaged in armed clashes with state forces and civilian targeting in Khyber Pakhtunkhwa. Elsewhere, poll-related violence continued in Sindh ahead of the next phase of local elections on 24 July. In India, demonstrations continued against the ‘Agnipath’ army recruitment scheme across several states and union territories, while Naxal-Maoist rebels targeted state forces and civilians in the Red Corridor. Elsewhere, poll-related violence broke out in Tripura state prior to and during by-poll elections on 23 June. In Bangladesh, political killings were reported in Khulna division, while militants of the Kuki-Chin National Front (KNF) targeted civilians in Chittagong. In Sri Lanka, violence broke out across several provinces amid continuing demonstrations over fuel shortages.

In Afghanistan, IS carried out three attacks on the Taliban in Kunar and Nangarhar provinces last week, while another IS attack in Kabul city targeted a Sikh temple. At least two people, including a Taliban member guarding the temple, were killed during the attack on the temple in Kabul. IS militants launched the attack with a grenade before opening fire on worshippers. An explosive-laden vehicle was also detonated prematurely outside when it was prevented from reaching the target. IS has carried out previous attacks against the Afghan Sikh and Hindu communities in recent years, the deadliest ones being in 2018 and 2020, in which dozens of Hindu and Sikh worshippers were killed. Such attacks have led to a considerable decrease in the population of these communities in Afghanistan in recent years (France 24, 20 April 2022).

Meanwhile, the NRF and the Taliban continued to clash in Badakhshan, Kabul, Panjshir, Kapisa, and Takhar provinces last week. In Takhar province, the NRF claims to have killed four Taliban intelligence forces. In Panjshir, the Taliban arrested and killed a civilian, while locals accuse the Taliban of killing several other civilians whose bodies were recovered in the region last week (Etilaat e Roz, 21 June 2022). The group also imposed curfews in parts of Hissa-e-awali Kohistan district in Kapisa province amid ongoing NRF offensives (Aamaj News, 23 June 2022). ACLED’s Subnational Surge and Threat Trackers first warned of increased violence in Badakhshan, Panjshir, and Kapisa provinces in the past month.

Additionally, clashes took place among Taliban members in Baghlan, Bamyan, and Faryab provinces last week. While the direct causes of these internal clashes remain unknown, two of the clashes were between Pashtun and non-Pashtun Taliban members, namely Uzbek and Tajik fighters. Similar clashes along ethnic fault lines have been recorded on multiple occasions since the group seized power in August 2021 (for further information about Taliban infighting, see this joint report between ACLED and local partner Afghan Peace Watch). In Sar-e Pol province, Taliban forces also clashed with the forces of a former ethnic Hazara Taliban commander, Mawlavi Mahdi. Mahdi has been gathering forces since his recent dismissal from the Taliban, with sources claiming that his dismissal was likely linked to his ethnicity (Shafaqna, 31 May 2022). Over two dozen fatalities were reported in the clashes last week, mostly incurred by the Taliban, according to reports (Etilaat e Roz, 24 June 2022). The Taliban has deployed hundreds of fighters to Sar-e Pol province over the past two weeks to arrest Mahdi (Hasht e Subh, 13 June 2022).

In Pakistan, Baloch separatists, Islamist militants, and unknown armed groups clashed with state forces and carried out attacks against civilians in Balochistan and Khyber Pakhtunkhwa provinces last week. These trends contributed to the 43% increase in violence in Pakistan in the past month relative to the past year flagged by ACLED’s Conflict Change Map, which first warned of increased violence to come in the country in the past month.

In Khyber Pakhtunkhwa, IS and unknown groups targeted civilians and security forces using remote explosives and direct attacks last week, resulting in multiple fatalities. Violence in Khyber Pakhtunkhwa is both common and highly volatile; it is considered an area of ‘extreme risk’ by ACLED’s Volatility and Risk Predictability Index.

Meanwhile, poll-related violence continued in Sindh province last week ahead of the second phase of local government elections to be held on 24 July. In Sanghar district, suspected members of the Pakistan Peoples Party (PPP) opened fire at an election rally of the Grand Democratic Alliance (GDA), injuring GDA members. The attack contributed to the 115% increase in violence in Sindh in the past month relative to the past year flagged by ACLED’s Subnational Threat Tracker. The Subnational Tracker first warned of increased violence to come in Sindh in the past month.

In India, demonstrations continued against the ‘Agnipath’ army recruitment scheme across several states and union territories last week. ‘Agnipath’ is a recruitment scheme for Indian youth to serve in the armed forces on short, four-year contracts to lower the average age of personnel (Reuters, 20 June 2022). However, many potential recruits object to the scheme, saying they should be allowed to serve longer than four years (Al Jazeera, 17 June 2022). Army aspirants, political parties, student groups, and members of farmers’ organizations and trade unions held nationwide demonstrations last week against the scheme. Amid the demonstrations, outbreaks of violence were reported in several states, including Bihar, Rajasthan, and Uttar Pradesh, with demonstrators pelting stones, clashing with police, and vandalizing vehicles and railway properties. The violent demonstrations have driven the significant increases in violence in the three states in the past month relative to the past year flagged by ACLED’s Subnational Threat Tracker. The Subnational Tracker first warned of increased violence to come in all three states in the past month.

Elsewhere in India, Naxal-Maoist rebels targeted state forces and civilians in the Red Corridor last week, resulting in multiple fatalities. In Chhattisgarh, the rebels shot and killed a villager on suspicion of being a police informer in Kondagaon district. The violence contributed to the 100% increase in violence in Chhattisgarh last week relative to the past month flagged by ACLED’s Subnational Surge Tracker, which first warned of increased violence to come in the state in the past month.

Meanwhile, poll-related violence broke out in Tripura state last week prior to and during by-poll elections held on 23 June. Multiple incidents of mob violence involving Bharatiya Janata Party (BJP) and Indian National Congress (INC) members were reported in Agartala city. Election-related violence contributed to the 243% increase in violence in Tripura last week relative to the past month flagged by ACLED’s Subnational Surge Tracker, which also first warned of increased violence to come in the state in the past month.

In Bangladesh, multiple killings targeting political party members were reported in Khulna division last week. Unknown assailants killed a Bangladesh Awami League (AL) leader and a Union Parishad (UP) member in Satkhira and Jessore districts. These killings contributed to the 100% increase in violence in Khulna last week relative to the past month flagged by ACLED’s Subnational Surge Tracker, which first warned of increased violence to come in Khulna in the past month.

Elsewhere, in Chittagong division, KNF armed cadres targeted civilians belonging to Tripuri ethnicity in Rangamati district last week, killing three people and injuring three others. The KNF claims that the victims belonged to Jumma Land Army (JLA), an armed group of the Parbatya Chattagram Jana Samhati Samiti (PCJSS) (Dhaka Tribune, 22 June 2022). ACLED’s Emerging Actor Tracker flagged the KNF as an emerging actor over the past month in Bangladesh; the presence of emerging actors indicates a change in the conflict environment, with civilians often bearing the burden of such new activity.

In Sri Lanka, violence broke out across several provinces last week amid continuing demonstrations over fuel shortages. Multiple clashes were reported between security forces and local residents in a number of districts. Sri Lanka has been facing one of its worst economic crises in recent decades, with a deteriorating currency, regular power cuts, and acute shortages in fuel, pharmaceuticals, and cooking gas (Newsfirst, 14 March 2022).