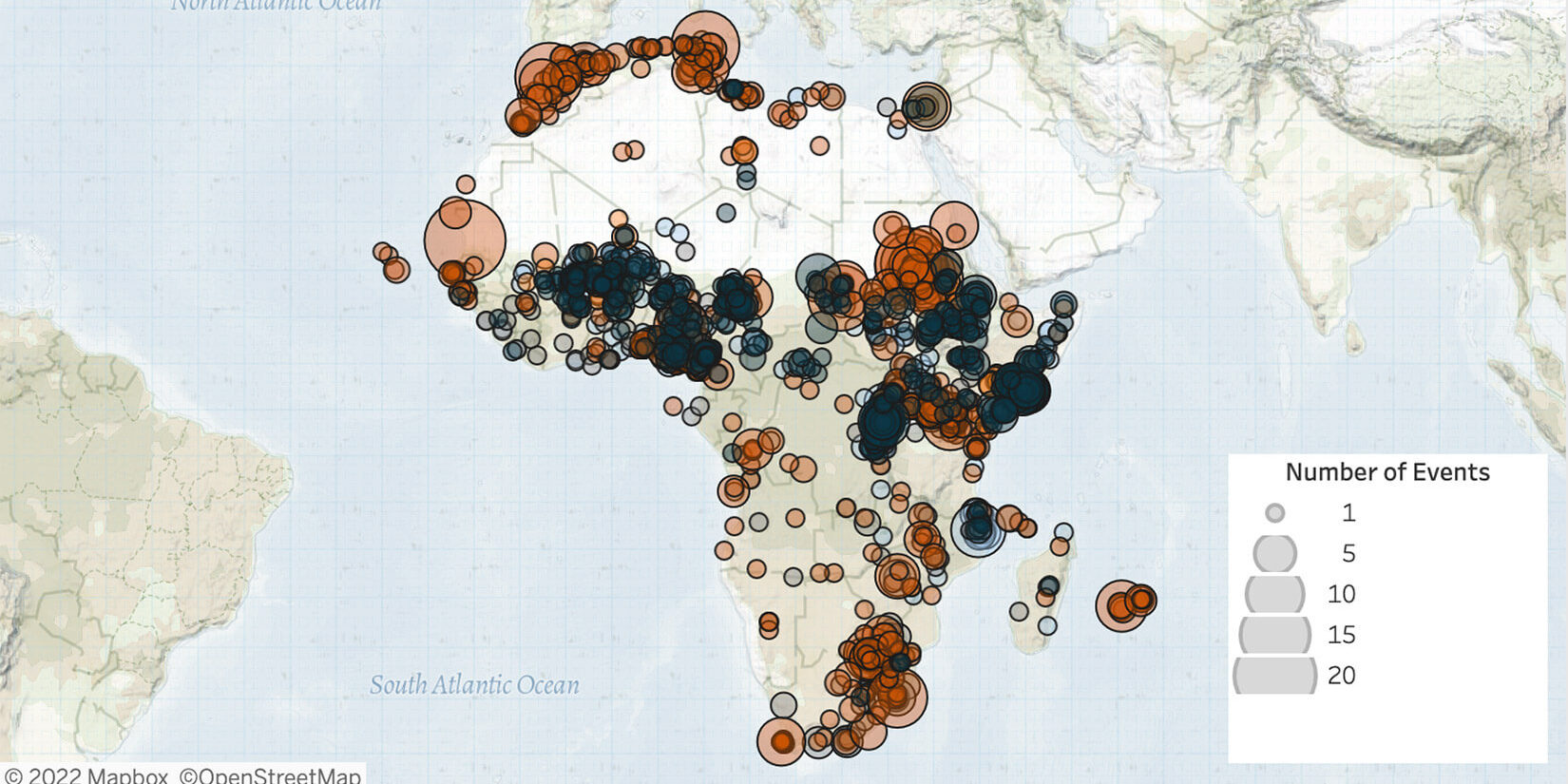 In Burkina Faso, levels of violence remained high in the Center-North and Sahel following continued violence carried out by Al Qaeda-affiliated Jama’at Nusrat al-Islam wal-Muslimin (JNIM) and Islamic State Sahel Province (IS Sahel). JNIM is the most active throughout the country, with its violence increasing in the Center-North by 155% last week relative to the past month flagged by ACLED’s Subnational Threat Tracker. In response, Burkinabe forces conducted ground operations and several airstrikes in the Center-East, Center-North, East, and South-East regions.

In Mali, JNIM and IS Sahel continued their offensives, with the highest levels of violence in the regions of Mopti and Gao. While IS Sahel attacks against civilians remained concentrated in the Gao region, JNIM confronted the military forces, as well as Dozo and Dan Na Ambassagou militias, across Mopti and Segou regions. JNIM attacked farmers and detonated explosives against Malian army and UN peacekeeping (MINUSMA) vehicles in Segou, Tombouctou, and Kidal regions. In neighboring Niger, violence remained high in the Tillaberi region, where IS Sahel clashed with Nigerien government forces, attacked civilians, and looted livestock. In the Diffa region, clashes between Nigerien military forces and Islamist militias resulted in several casualties.

In Cameroon, violence related to the Anglophone conflict spilled over to the West region with an armed confrontation between Ambazonian separatists and the gendarmerie forces in the Bamboutos department, the second attack perpetrated by separatists in the West region in less than a month. In the South-West region, violence erupted between the Oliti and Messaga Ekolo communities over a land dispute, resulting in dozens of fatalities.

In Libya, demonstrations began in the West and East regions after the peace talks held under the aegis of the United Nations failed to deliver a constitutional framework for new elections (Reuters, 30 June 2022). Demonstrators demanded the dissolution of political bodies and the holding of new elections, setting fires to government buildings in Tobruk and Bani Walid.

In South Sudan, violence increased last week in Warrop state by 300% relative to the past month, as flagged by ACLED’s Subnational Threat Tracker. During a cattle-recovering operation in Rualbet payam, military forces clashed with a Rek Dinka militia, resulting in over a dozen soldiers killed (Crisis Group, June 2022). In Twic county and in the disputed Abyei region of Sudan, Ngok Dinka clashed with Twic Dinka, resulting in many deaths and hundreds of displacements. Elsewhere, Sudanese forces launched offensives against Ethiopian outposts in the disputed Al Fashaga region, shelling camps, clashing with militias, and seizing settlements (Reuters, 28 June 2022). Finally, ‘Millions March’ demonstrations were met with violence by security forces, leaving several dead and others injured. Meanwhile, General Abdel-Fattah Al-Burhan announced the military’s withdrawal from political negotiations for consensus between political and civilian parties to form a government (Sudan Tribune, 4 July 2022).

In the Democratic Republic of Congo, continued fighting and exchanges of territorial control between military forces (FARDC) and March 23 Movement (M23) in Rutshuru, North Kivu, resulted in scores of fatalities, kidnapping, and sexual violence against civilians (Al Jazeera, 30 June 2022). Elsewhere in Beni territory, attacks on civilians by Allied Democratic Forces (ADF) increased and led to dozens of fatalities. In addition, Ugandan forces launched air strikes against the group in the Watalinga area of Beni. In South Kivu, clashes continued between Twirwaneho and allied militias against Mayi Mayi Biloze Bishambuke in Fizi territory, leaving many wounded. Meanwhile, in Tanganyika, MONUSCO troops officially withdrew from the province (MONUSCO, 24 June 2022).

Finally, demonstrators gathered in Cape Verde, Reunion, and South Africa against hate crime and discrimination against the LGBT+ community.

Ariane Dinalli Francisco is the East and South Africa Assistant Research Manager at ACLED and has been with the organization since December 2019. She was originally hired as a South America researcher for the Latam desk. Ariane holds a MA in Democratic Governance and Civil Society from the Osnabruck University, Germany, and a BA in International Relations from the Pontifical Catholic University of Rio de Janeiro, Brazil. Ariane has vast research experience, and her work focuses on interdisciplinary approaches to organized crime, security, and peace and conflict studies.