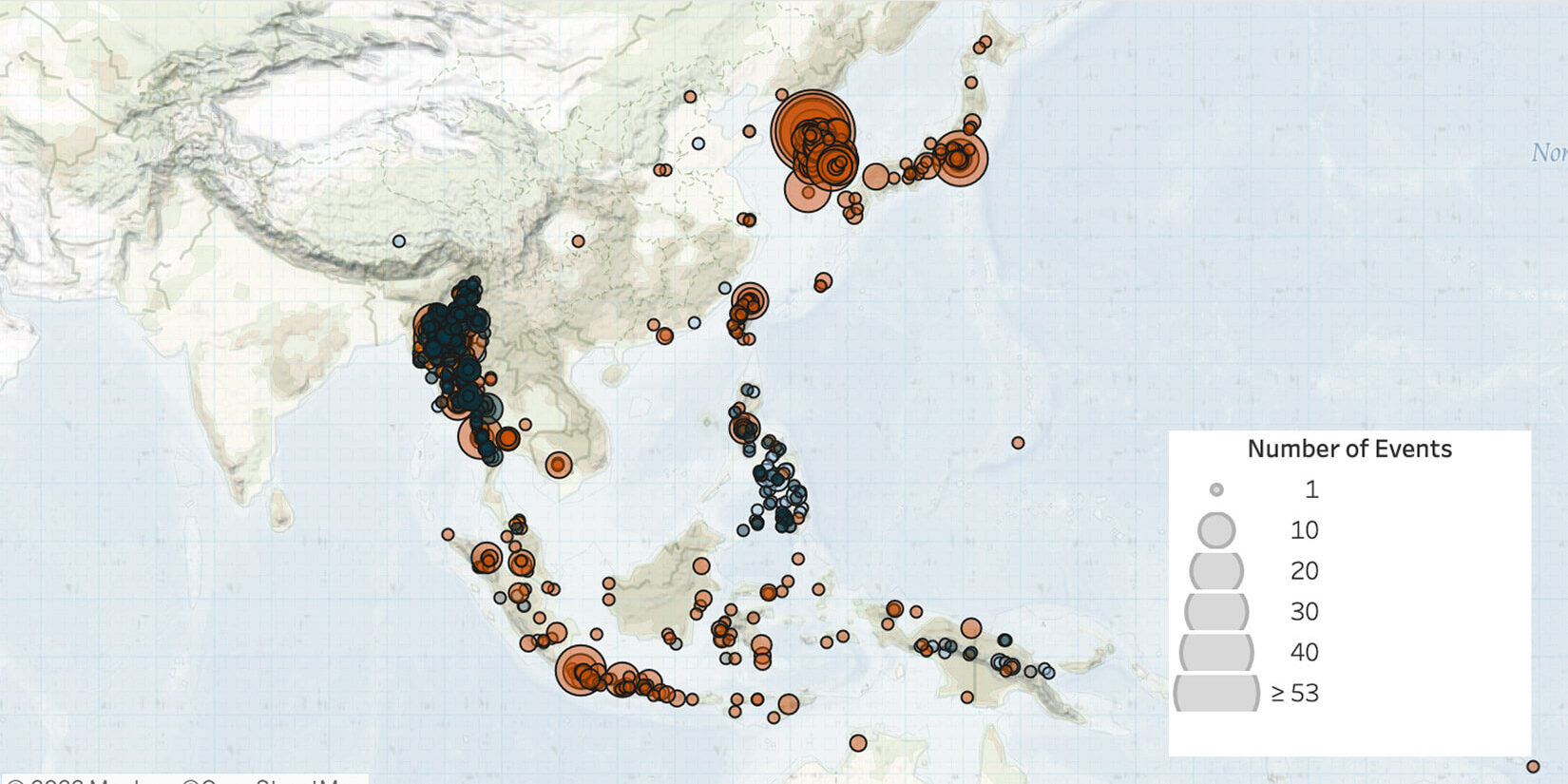 Last week in the East Asia Pacific region, fighting broke out between the Myanmar military and a combined force of the Karen National Union/Karen National Liberation Army (KNU/KNLA) and local resistance groups. Meanwhile, the military continued arson attacks, assaults, and extrajudicial killings of civilians. In Papua New Guinea, election-related violence continued in the final days before national elections beginning on 4 July. In the Philippines, the inauguration of Ferdinand ‘Bongbong’ Marcos, Jr. as president was met with demonstrations. In Indonesia, ethnic Papuans took to the streets in opposition to legislation on the creation of new provinces in Papua following the central government’s ratification of the bills. Abortion-related solidarity demonstrations took place across Australia and New Zealand after the United States Supreme Court overturned the Roe v. Wade decision.

In Myanmar, fighting broke out between the military and a combined force of the KNU/KNLA and local resistance groups in Kayin and Mon states last week. In Kayin state, intense fighting was reported between the military and a combined force of the KNU/KNLA, the Karen National Defense Organization (KNDO), and the Cobra Column. On 26 June, the combined forces attempted to seize the U Ka Yit Hta military outpost in Waw Lay town of Myawaddy township. The military responded with aerial attacks and artillery, before reinforcing the outpost with ammunition and troops. The fighting lasted between 26 and 30 June, with considerable casualties on both sides (Irrawaddy, 29 June 2022). Located near the Thailand-Myanmar border, the outpost is strategically important for the military’s transportation of supplies and reinforcements. On 30 June, Myanmar military aircraft entered Thailand’s airspace during the fighting, which led the Royal Thai Air Force to conduct air patrols with two fighter jets along the border (Bangkok Post, 30 June 2022). A school in Tak province has since conducted air raid drills with its students (Thai PBS, 5 July 2022). Violence in Kayin and Mon states is both common and highly volatile; they are both considered areas of ‘extreme risk’ by ACLED’s Volatility and Risk Predictability Index.

In Mon state, fighting broke out on 25 June near Htone Bo Ka Lay village in Thaton township, when the military advanced towards the village in the KNU/KNLA territory. Military and Border Guard Force (BGF) troops raided the village, burning down nearly 100 houses and killing fleeing locals, including one person with a disability (Karen Information Center, 27 June 2022). An estimated 7,000 civilians have fled the area due to the fighting (Irrawaddy, 27 June 2022). Meanwhile, two National League for Democracy (NLD) party members, who were captured by the military on 22 June in Bilin township, were executed on 30 June after being tortured during military interrogation (Irrawaddy, 4 July 2022). A third person, the Bilin township NLD party chair, was also severely injured during the same interrogation; he was later found tortured to death on 6 July (Irrawaddy, 7 July 2022).1 ACLED’s dataset is current up to 1 July 2022. This event will be included in the dataset next week.

Meanwhile, in Yangon region, the Yangon Region People’s Brigade People’s Defense Force (PDF) detonated bombs at four court buildings across four townships – Mayangone, East Dagon, South Okkalapa, and Thaketa – during Operation ‘Justice Lady Mission.’ No casualties were reported from the attacks (Mizzima, 30 June 2022). The bombings come after Daw Aung San Suu Kyi was moved to a prison in Nay Pyi Taw from an undisclosed location as she continues to be tried on politically motivated charges. The group also sought to highlight the mass arrests of activists since the coup.

In Papua New Guinea, election-related violence continued last week, with armed clashes between supporters of rival candidates occurring in Wabag, Enga Province. On 26 June, an independent candidate for Wabag Open electorate and his supporters fought with supporters of the incumbent Wabag Open MP, resulting in one man being shot dead (Post Courier, 30 June 2022). While the independent candidate was arrested for murder, he has been released on bail and will be allowed to continue contesting the election (The National, 1 July 2022). Since nomination day on 20 May, the media has reported 30 deaths connected to election-related violence (The National, 30 June 2022). ACLED’s Emerging Actor Tracker has flagged six emerging actors involved in election violence in Papua New Guinea over the past month; the presence of emerging actors often presents an increased risk to civilians.

Last week in the Philippines, Marcos, Jr. took office as the 17th president of the Philippines following his inauguration on 30 June, triggering demonstrations. The son of former leader Ferdinand Marcos, Marcos, Jr.’s road to the presidency had been marked with demonstrations against abuses committed under his father’s dictatorship and allegations of election fraud. The inauguration was met with protests opposing Marcos, Jr.’s praise of his father’s regime, while also demanding higher wages, relief from the skyrocketing prices of goods, and justice for victims of human rights violations (Manila Bulletin, 30 June 2022). Different groups also urged Marcos, Jr. to break from the policies of his predecessor, Rodrigo Duterte (Philippine Daily Inquirer, 30 June 2022). However, Marcos, Jr. is expected to continue the former president’s controversial policies, including the war on drugs (Philippine Daily Inquirer, 30 June 2022; Rappler, 7 October 2021).

Meanwhile, there was a spike in violence involving Islamist groups in Bangsamoro Autonomous Region in Muslim Mindanao (BARMM) and Soccsksargen last week. Notably, three suspected Abu Sayyaf militants were killed by the military during a firefight in Tipo-Tipo, Basilan, BARMM (Philippine Daily Inquirer, 27 June 2022). Military ground forces received air support during the firefight. This violence contributed to the 35% increase in violence in the Philippines in the past month relative to the past year flagged by ACLED’s Conflict Change Map, which first warned of increased violence to come in the country in the past month.

In Indonesia last week, protests were held by ethnic Papuans against the parliament’s decision on 30 June to ratify three bills on the creation of new provinces in Papua. Despite demonstrations in recent months against the plan and fears it will threaten the region’s autonomy, the parliament passed legislation for the creation of the new Central Papua, Papua Pegunungan (a.k.a. Papua Mountains or Highland Papua), and South Papua provinces (Antara News, 30 June 2022; TheIndonesia.id, 28 June 2022; CNN, 1 July 2022). Following the announcement, ethnic Papuans held a protest in Mimika regency against the appointment of Nabire as the capital of Central Papua instead of Timika (Kompas, 30 June 2022). Meanwhile, in Pegunungan Bintang regency, thousands of protesters rallied to oppose the government’s decision designating their regency as part of Papua Pegunungan province (Tribunnews, 1 July 2022). ACLED’s Subnational Surge Tracker has warned of a possible increase in violence to come in Papua.

Meanwhile, Muslim groups across the country took to the streets last week to demand the closure of a restaurant chain. Protesters claim that the restaurant’s recently launched campaign providing free alcoholic drinks to people named Muhammad insults their religion, as drinking alcohol is prohibited in Islam (Tribunnews, 30 June 2022). Demonstrators allege that the owner violates the blasphemy law. The current blasphemy law has led to more than 150 people being jailed in Indonesia since 2004 (HRW, 9 September 2021). The parliament is planning to pass a new criminal code in July (Al Jazeera, 17 July 2022), with the refusal to release the most recent draft to the public triggering several demonstrations in recent weeks (Kompas, 28 June 2022).

Solidarity demonstrations took place in Australia and New Zealand last week in several cities in opposition to the US Supreme Court’s decision to overturn the landmark Roe v. Wade decision on abortion, standing in solidarity with women in the US on abortion access rights. Meanwhile, in Adelaide, around 5,000 ‘pro-life’ protesters rallied (Adelaide Advertiser, 1 July 2022).