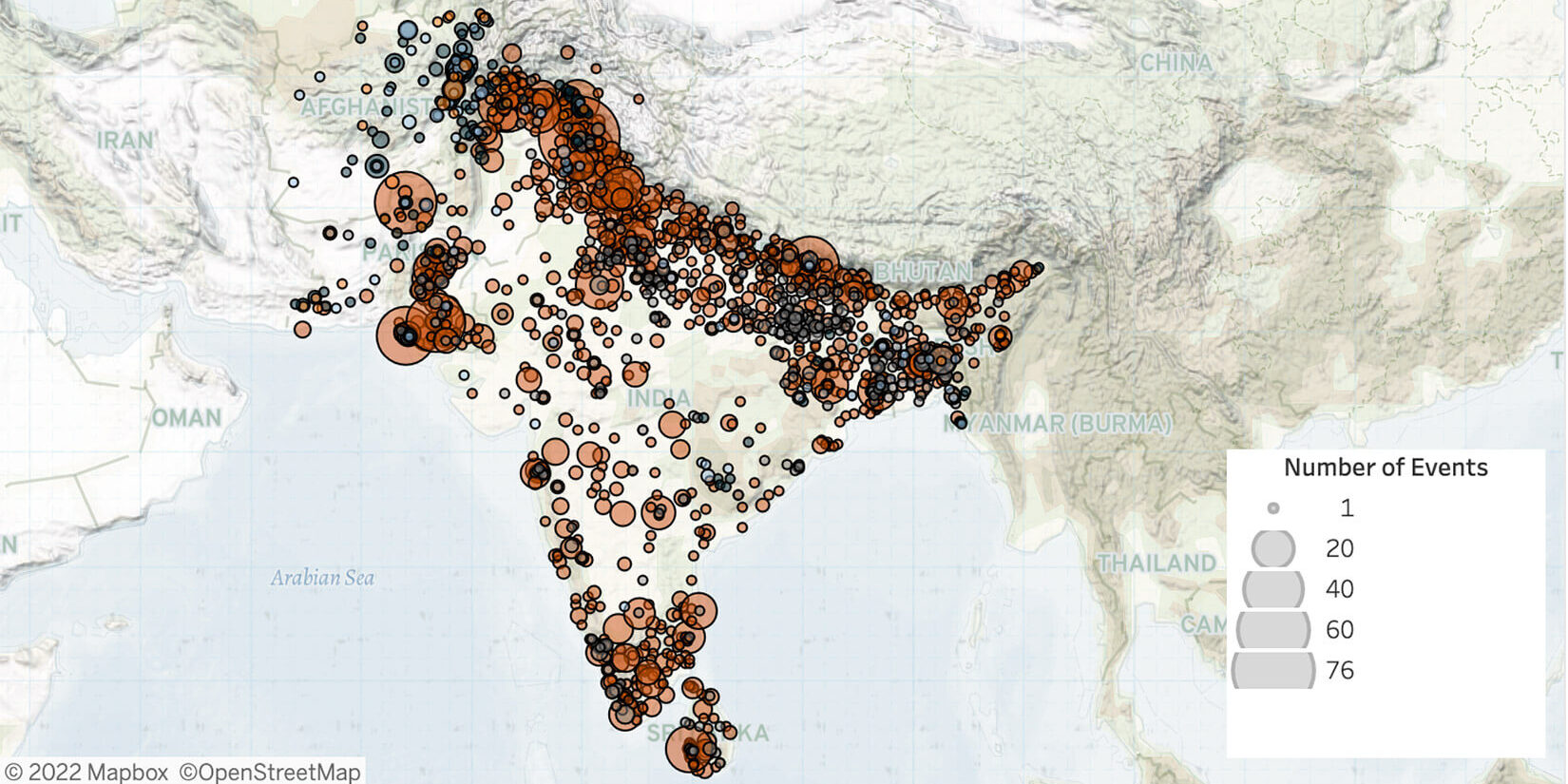 Last week in South Asia and Afghanistan, the Taliban continued to clash with anti-Taliban groups and the Islamic State (IS). In Pakistan, the Tehreek-i-Taliban Pakistan (TTP) and unknown armed groups clashed with state forces and targeted civilians in Khyber Pakhtunkhwa province, while Baloch separatists targeted security forces in Balochistan. In India, violence broke out in Rajasthan and Maharashtra states over the derogatory remarks against Prophet Muhammad by two suspended Bharatiya Janata Party (BJP) spokespersons. Naxal-Maoist rebels targeted state forces and civilians in the Red Corridor, while demonstrations continued against the ‘Agnipath’ army recruitment scheme. In Bangladesh, political killings were reported in Dhaka and Chittagong divisions. In Sri Lanka, demonstrations over fuel shortages and inflation continued amid the country’s worst economic crisis in decades. Finally, poll-related violence was recorded during local elections last week in Sindh in Pakistan and in Madhya Pradesh in India.

In Afghanistan, clashes between the National Resistance Front (NRF) and the Taliban occurred in Kapisa, Baghlan, and Panjshir last week. The NRF and the Afghanistan Freedom Front (AFF) conducted a joint operation against the Taliban in Koh Band district of Kapisa province. This is the second time ACLED records a coordinated attack by the two groups since AFF declared its presence in February. Meanwhile, AFF claims to have repelled attacks by Taliban forces in Baghlan province, killing and injuring a dozen Taliban members (Twitter @AfgFreedomAFF, 30 June 2022). Additionally, an attack by the Afghanistan Liberation Movement killed three Taliban members on foot patrol in Balkh province.

IS also attacked Taliban forces, targeting a vehicle with explosives in Kabul city, with reports indicating five Taliban members were killed or injured. Elsewhere, in Nangarhar province, Taliban forces claim to have killed five IS members during a special operation last week.

Meanwhile, Taliban forces attacked the forces of a former ethnic Hazara Taliban commander, Mawlavi Mahdi, for a second week in a row. In Sar-e Pol province, Mahdi’s forces reportedly repulsed the Taliban attack that was launched the week prior. Moreover, Mohammed Muradi, a former militia leader who had recently joined Mahdi’s forces (Hasht e Subh, 27 June 2022), was killed by the Taliban in his residence in Ghor province, along with some of his family members and six of his militiamen. Taliban forces later arrested and killed people with suspected links to Mahdi’s militia in Ghor and Sar-e Pol provinces; some sources claim tens of people were killed during these operations (Aamaj News, 29 June 2022; REF/RL, 1 July 2022). The events in Sar-e Pol contribute to the 100% increase in violence in the province over the past week relative to the past month, as flagged by ACLED’s Subnational Surge Tracker.

Lastly, a controversial gathering of 3,000 Islamic clerics and tribal leaders held by the Taliban in Kabul was attacked last week, with both IS and the National Liberation Front of Afghanistan (NLFA) claiming responsibility (Afghan Islamic Press News, 2 July 2022; Facebook @aazadagan, 1 July 2022; Al Jazeera, 1 July 2022). However, Taliban officials refute the claims, saying the explosions were caused by a gas cylinder and that they shot two gunmen, without specifying their affiliations (Afghan Islamic Press News, 1 July 2022).

In Pakistan, the TTP, unknown armed groups, and Baloch separatists clashed with state forces and carried out attacks against civilians in Khyber Pakhtunkhwa, Balochistan, and Sindh provinces last week. This violence contributed to the 31% increase in violence in Pakistan last week relative to the past month; ACLED’s Conflict Change Map first warned of increased violence to come in the country in the past month.

In Khyber Pakhtunkhwa, the TTP and unknown groups clashed with security forces and targeted civilians last week, resulting in multiple fatalities. In one of the clashes, unknown militants attacked a polio vaccination team in North Waziristan district, killing a health worker and two policemen. Militants believe that vaccination drives are foreign-funded and portray the campaigns as a Western conspiracy to sterilize children (Reuters, 28 June 2022); vaccination teams have been targeted by armed attackers since a UN campaign began in 2012 to vaccinate against polio, which remains endemic in Pakistan (Al Jazeera, 28 June 2022).

Meanwhile, at least three people were reportedly killed and multiple injured in Sindh province during the first phase of local elections last week. Election-related clashes contributed to the 355% increase in violence in Sindh last week relative to the past month, as flagged by ACLED’s Subnational Surge Tracker, which first warned of increased violence to come in Sindh in the past month.

In India, two Hindu community members were killed by Muslim men in Rajasthan and Maharashtra states last week after expressing support for a suspended BJP spokesperson, who had earlier made offensive remarks against the Prophet Muhammad (New Indian Express, 5 July 2022).

Elsewhere in India, at least one person was killed and multiple people were injured in Madhya Pradesh state during the local elections last week, contributing to the 389% increase in violence in the state last week relative to the past month, as flagged by ACLED’s Subnational Surge Tracker, which first warned of increased violence to come in Madhya Pradesh in the past month.

Meanwhile, demonstrations continued against the ‘Agnipath’ army recruitment scheme across several states and union territories last week. The ‘Agnipath’ scheme recruits youth to serve in the armed forces for four-year contracts (Reuters, 20 June 2022). However, many object to the short-term nature of the scheme (Al Jazeera, 17 June 2022).

In Bangladesh, unknown assailants shot and killed a Union Parishad (UP) member belonging to Bangladesh Awami League (AL) in Dhaka last week, while a Jubo League member was killed in Chittagong. Also, in Chittagong, an armed clash broke out between members of the Mog Liberation Party (MLP) and Parbatya Chattagram Jana Samhati Samiti (PCJSS) in Rangamati district, resulting in one fatality. ACLED’s Conflict Change Map first warned of increased violence to come in Bangladesh in the past month.

In Sri Lanka, health workers, labor groups, fishermen, and political party members held demonstrations across several provinces last week against fuel shortages and inflation. Despite protests, Sri Lanka has raised its fuel prices amid uncertainty in getting new shipments of oil (Al Jazeera, 26 June 2022). Sri Lanka has been facing one of its worst economic crises in recent decades, with a deteriorating currency, regular power cuts, and acute shortages in fuel, pharmaceuticals, and cooking gas (Newsfirst, 14 March 2022).