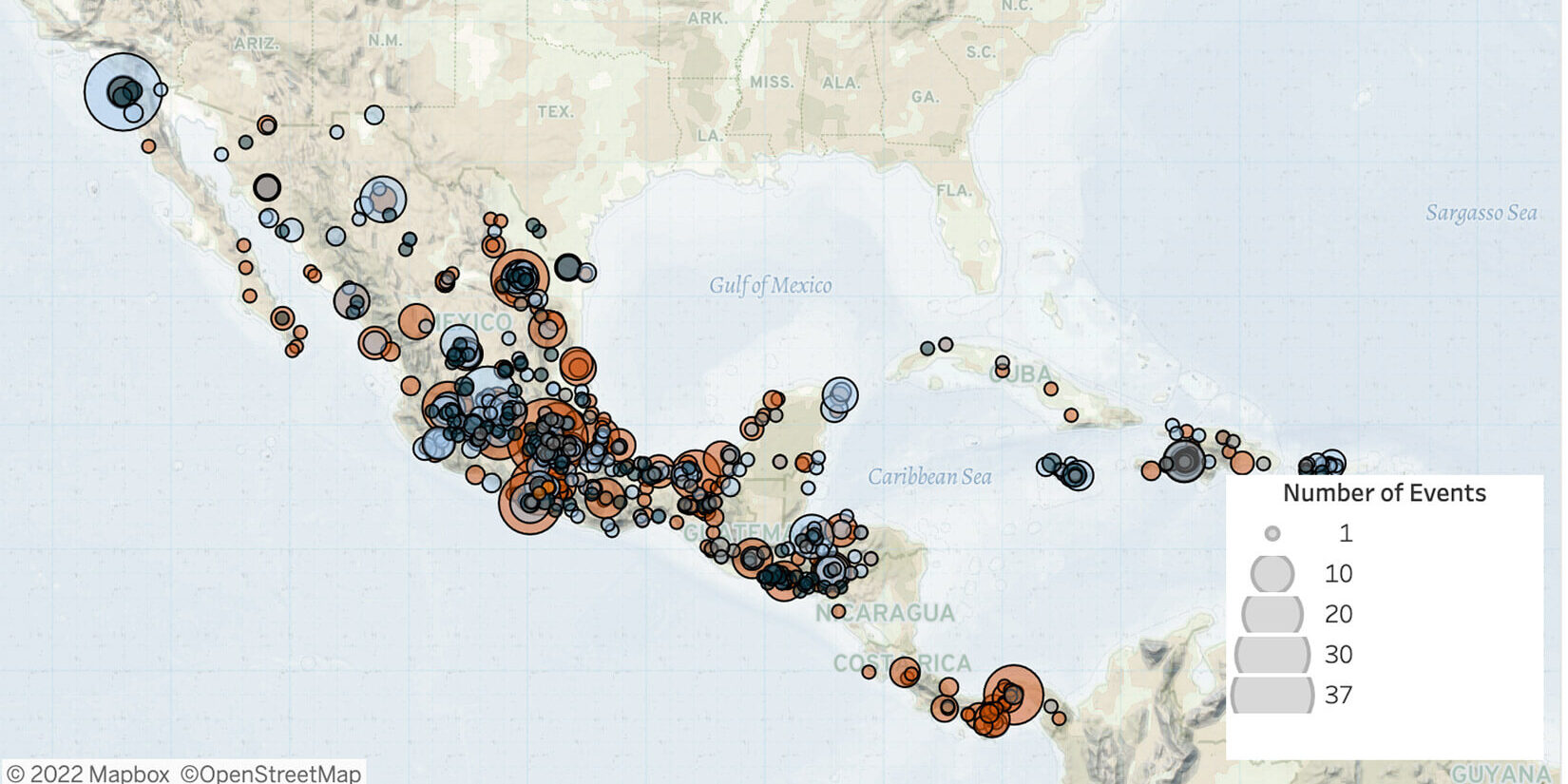 Last week in Mexico, Central America, and the Caribbean, violence remained high amid clashes between rival gangs and attacks against civilians in Haiti and Mexico. In Haiti, clashes between the Jean-Denis gang and the Baz Gran Grif de Savien gang resulted in the deaths of at least 20 people. In Mexico, members of the La Familia Michoacana Cartel clashed with the Pueblan Territorial Force local self-defense group in Puebla state, while armed suspects attacked a journalist in Sonora state. In Jamaica, three members of the Speculation gang were killed by police officers, triggering a demonstration by local residents. Meanwhile, demonstrations continued in Panama against the high prices of fuel and food. In Cuba, power outages continue to drive anti-government demonstrations.

In Haiti, gang violence intensified in Artibonite department last week, with clashes between members of the Baz Gran Grif de Savien and the Jean-Denis gangs that left at least 20 people dead. During the clashes, the gangs burned down several houses and members of the Jean-Denis gang killed civilians accused of collaborating with the Baz Gran Grif de Savien gang. The clashes come after police carried out operations against the Baz Gran Grif de Savien gang with the alleged support of the Jean-Denis gang; the latter is accused of having links with government officials (Gazette Haiti, 19 July 2022; Alterpress, 23 June 2020). Both gangs have traditionally had a presence in Artibonite department and had maintained a truce in the area for more than a year (Le Nouvelliste, 18 July 2022). ACLED’s Emerging Actor Tracker flagged the Jean-Denis gang as an emerging actor over the past month in Haiti, signaling that there had not been reports of the group engaging in violence over the past year; the presence of an emerging actor can indicate a change in the conflict environment, with civilians facing heightened risk of eventually bearing the burden of such new activity.

Elsewhere, in Ouest department, violence against civilians continued at high levels last week. Most of these events occurred in the Petionville commune of Port-au-Prince, where gangs attacked local businesses and kidnapped several people, including a journalist. An attack by members of the Ti Makak gang against a lottery business left an unknown number dead, while the Vitelhomme gang attacked a local market, killing two people (Vant Bèf Info, 22 July 2022). ACLED’s Conflict Change Map first warned of increased violence to come in Haiti in the past month.

In Mexico, members of the Pueblan Territorial Force — a local self-defense group — clashed with the La Familia Michoacana Cartel in Jolalpan municipality, Puebla state, on 20 July. The clash left six people dead, including the leader of the self-defense group, and several injured. According to the state’s governor, the Pueblan Territorial Force is involved in criminal activities and is currently seeking to prevent the expansion of the La Familia Michoacana Cartel in Puebla (El Universal, 21 July 2022). The municipality of Jolalpan and its neighboring areas are strategic locations for drug and fuel trafficking, connecting Puebla to Morelos and Guerrero states; in the latter, the La Familia Michoacana controls several municipalities (Infobae, 21 July 2022; Contra Réplica, 25 July 2022).

Meanwhile, in Sonora state, gunmen carried out a drive-by shooting against a journalist in Ciudad Obregón last week. Though the journalist was unharmed in the attack, the National Human Rights Commission issued an alert demanding state authorities provide protection for the victim (Expansión Política, 19 July 2022). The journalist is the director of a local digital media outlet and reports on events related to insecurity in the state (El Universal, 17 July 2022). Thus far in 2022, ACLED records more than 20 targeted attacks against journalists, which have resulted in the deaths of at least 12 journalists. This marks an increase in attacks against journalists in the first seven months of the year compared to the same period in 2021.

In Jamaica, law enforcement officers and members of the Speculation gang clashed in Saint Elizabeth parish last week, leaving three gang members dead. Following the clash, residents demonstrated against the police, condemning their actions and claiming that there is no presence of gang members in the community (Daily Observer Jamaica, 22 July 2022). Local politicians have reported rising insecurity in Saint Elizabeth parish, which police have attributed to Speculation gang activity (Jamaica Observer, 30 May 2022). Additionally, violence against civilians remained high in Kingston last week, with five people killed during attacks, including a man who was killed in an extortion-related attack perpetrated by police officers. ACLED’s Subnational Surge Tracker first warned of increased violence to come in Kingston in the past month.

In Panama, demonstrations against high fuel and food prices continued for a third consecutive week. Though demonstrations slightly decreased last week compared to the week prior, teachers, union workers, and Indigenous people continued to block roads in at least seven of the country’s 10 provinces. In Panama City, armed rioters clashed with police officers on 20 July, leaving a person dead; while in Veraguas province, rioters barricaded roads with burning tires and clashed with police officers. This violence contributed to the 115% increase in violence in Panama last week relative to the past month flagged by ACLED’s Conflict Change Map, which first warned of increased violence to come in the country in the past month. Last week’s demonstrations continued in spite of an agreement reached between the government and the unions on 17 July to lift the roadblocks in exchange for reductions in fuel and food prices and other social concessions (BBC, 21 July 2022). Some unions deem the agreement to be insufficient and broadened their demands to include the freezing of food prices as well as salary increases (El Diario.es, 19 July 2022). On 19 July, the government and representatives of labor unions started a new dialogue mediated by the Catholic church amid fuel and supply shortages across the country due to the roadblocks (Europa Press, 20 July 2022).

In Cuba, power outages continued to trigger demonstrations last week in several cities of Matanzas, Mayabeque, and Villa Clara provinces. In Mayabeque province, rioters broke into the premises of the state-owned company Electric Union of Cuba and set offices on fire, while in Villa Clara province, police intervened in a demonstration in Santa Clara and arrested one of the participants. During the demonstrations, participants chanted anti-government slogans as the government accused them of supporting the “counterrevolution” (EFE, 23 July 2022). Recently, power outages have increased across the country leading to two consecutive weeks of demonstrations. The government attributes this problem to maintenance work, lack of replacement parts due to the US embargo, and fuel shortages; however, experts consider that the lack of investment and maintenance of the energy infrastructure is the main reason behind this situation (BBC, 16 July 2022).