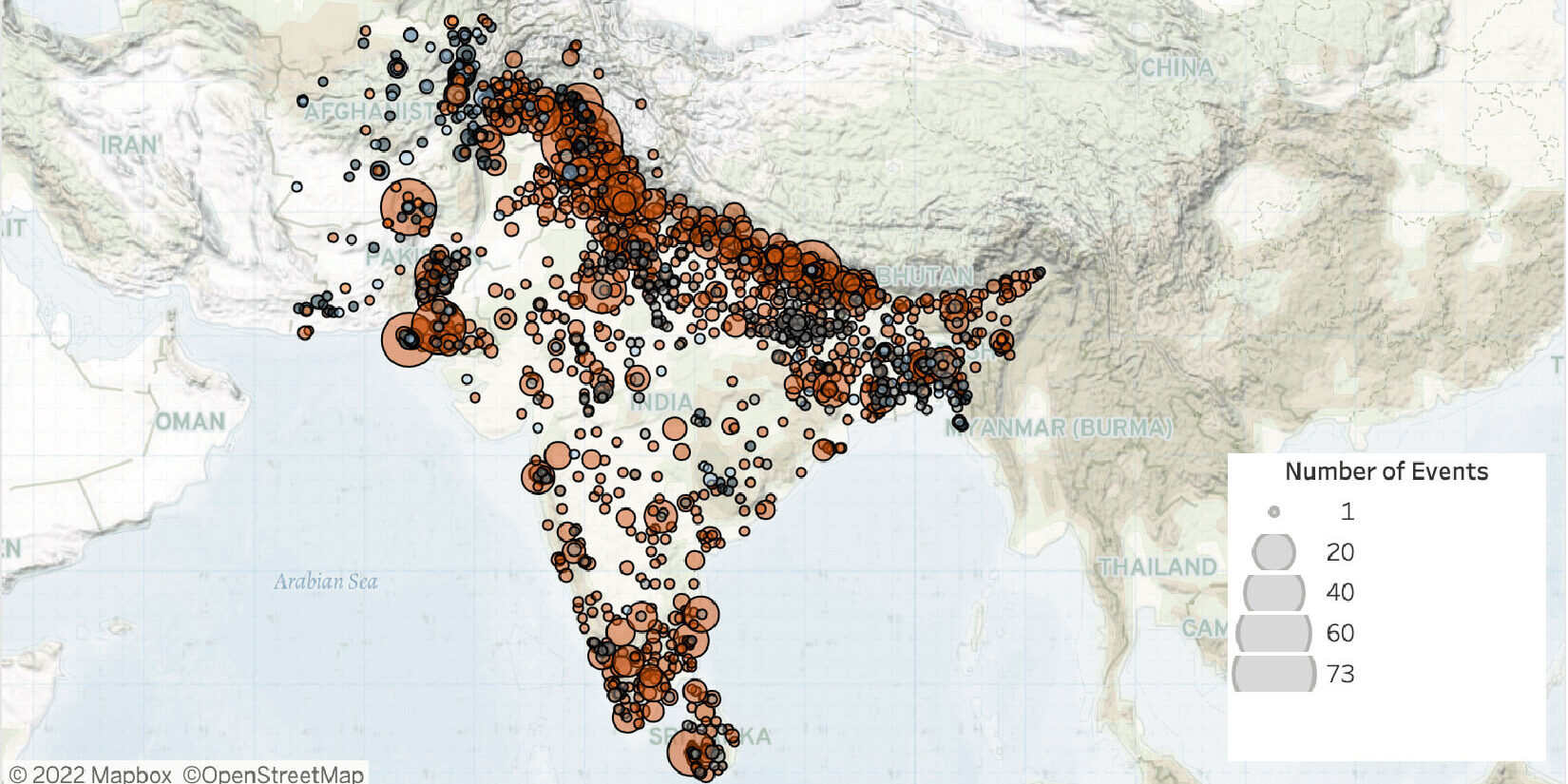 In Afghanistan, anti-Taliban groups and IS continued to launch attacks against the Taliban last week. The National Liberation Front of Afghanistan targeted the Taliban with two attacks in Ghazni province, claiming to kill over a dozen Taliban members. A new anti-Taliban group, the Hindu Kush Front, flagged by ACLED’s Emerging Actor Tracker, also declared its existence and targeted Taliban members in Panjshir and Parwan. In Kabul city, IS killed a Taliban member with an IED attack in Kabul city. ACLED has recorded an IS attack in Kabul city nearly every week since April this year. Meanwhile, the Taliban launched operations against IS in Kunduz and Samangan provinces, killing at least five militants.

NRF-Taliban clashes continued in Panjshir, Baghlan, Takhar, Nangarhar, Kunduz, and Kapisa provinces last week. The NRF claims to have inflicted dozens of fatalities on the Taliban in Baghlan province, and to have shelled Taliban positions in Takhar. These trends contribute to the large increases in violence in both Baghlan and Takhar last week relative to the past month, flagged by ACLED’s Subnational Surge Tracker. The Subnational Tracker first warned of increased violence to come in the latter in the past month.

In addition to Taliban clashes with IS and anti-Taliban groups, inter-Taliban clashes also continue to be reported. In the Deh Salah district of Baghlan, a protest against the Taliban took place following the killing of a young boy by the Taliban during their house-to-house searches. During the protest, local Taliban members clashed with Pashtun Taliban members, who had been recently deployed to the district, though no casualties were reported. In 2022, ACLED records three more clashes between Pashtun and local Taliban members in Baghlan. Seeking to minimize future inter-Taliban clashes, Taliban officials sent a delegation to the district to discuss both this event and the “differences” between the local and Pashtun Taliban groups (BBC, 21 July 2022).

Women came under increased attacks by the Taliban last week. The Taliban killed two women in Panjshir province, one for unknown reasons and one ‘mistakenly,’ as she was thought to be aiding the NRF while carrying food to her husband. In Takhar province, a woman was whipped for shopping without a male guardian in Darqad district. In Nangarhar province, a woman journalist was beaten by the Taliban outside her home in Surkh Rud district for unclear reasons. Violence targeting women has been especially high in Afghanistan since the Taliban assumed power last summer (for more, see this recent ACLED report, written in partnership with Afghan Peace Watch).

In Pakistan, Baloch separatists and unidentified armed groups clashed with state forces and targeted civilians in Balochistan and Khyber Pakhtunkhwa provinces last week. This violence contributed to the 66% increase in violence in Pakistan in the past month relative to the past year flagged by ACLED’s Conflict Change Map, which first warned of increased violence to come in the country in the past month. In Balochistan, Baloch separatists clashed with security forces, and targeted both security forces and civilians with remote explosives and grenade attacks last week. Multiple fatalities were reported across separate attacks involving the Baloch Liberation Army (BLA) and the Baloch Liberation Front (BLF). Elsewhere, in Khyber Pakhtunkhwa, unidentified armed groups engaged in armed clashes with state forces and civilian targeting, resulting in multiple fatalities. ACLED’s Subnational Surge Tracker first warned of increased violence to come in Khyber Pakhtunkhwa in the past month. Violence in both Balochistan and Khyber Pakhtunkhwa is both common and highly volatile; they are both considered areas of ‘extreme risk’ by ACLED’s Volatility and Risk Predictability Index.

Meanwhile, poll-related violence broke out in Punjab province during by-elections held on 17 July. At least one fatality was reported across separate clashes involving Tehreek-e-Labbaik Pakistan (TLP), Pakistan Tehreek-i-Insaf (PTI), and Pakistan Muslim League-Nawaz (PML-N) supporters. These clashes contributed to the 357% increase in violence in Punjab over the past week relative to the past month, as flagged by ACLED’s Subnational Surge Tracker.

In Sri Lanka, security forces launched an operation to remove anti-government protesters from an active protest site in Colombo last week, dismantling tents, arresting several protest leaders, and assaulting protesters. The raid comes a day after parliament elected Ranil Wickremesinghe as president of Sri Lanka on 20 July (Al Jazeera, 21 July 2022). Anti-government protesters have rejected the appointment of Wickremesinghe, saying he is too close to the family of former President Gotabaya Rajapaksa and Prime Minister Mahinda Rajapaksa, seen as responsible for the current economic crisis in the country (Al Jazeera, 20 July 2022; BBC, 20 July 2022; Times of India, 11 May 2022). Meanwhile, Dinesh Gunawardena, a veteran member of the ruling Sri Lanka People’s Front (SLPP), was sworn in as the new prime minister on 22 July (Al Jazeera, 22 July 2022). Demonstration activity in Sri Lanka has spiked since March as the country faces one of its worst economic crises in recent decades (for more, see ACLED’s infographic Sri Lanka: Increasing Debt, Increasing Demonstrations).

In Madhya Pradesh state, suspected members of the local Muslim community assaulted a Bajrang Dal member in Agar Malwa district last week. This was due to his supporting a suspended BJP spokesperson, who had earlier made offensive remarks about the Prophet Muhammad. The attack contributes to the 490% increase in violence in Madhya Pradesh in the past month relative to the past year flagged by ACLED’s Subnational Threat Tracker, which first warned of increased violence to come in the state in the past month.

Meanwhile, INC members held nationwide demonstrations on 21 and 22 July against the alleged misuse of power dictating central investigating agencies to target opposition politicians. The demonstrations were held after the ED issued a summons to INC President Gandhi for questioning in a suspected money laundering case.

In Bangladesh, three Rohingya refugees were shot and injured by suspected ARSA militants at a shelter camp in Cox’s Bazar district in Chittagong division last week, presumably over the control and dominance of the camp (Prothom Alo, 22 July 2022). Other such incidents involving ARSA militants have occurred in the recent past, with multiple attacks reported since February this year.

Elsewhere in Chittagong, a UPDF supporter was killed and another injured in an armed clash between UPDF-Democratic and UPDF members in Khagrachhari district over factionalism and establishing political supremacy.