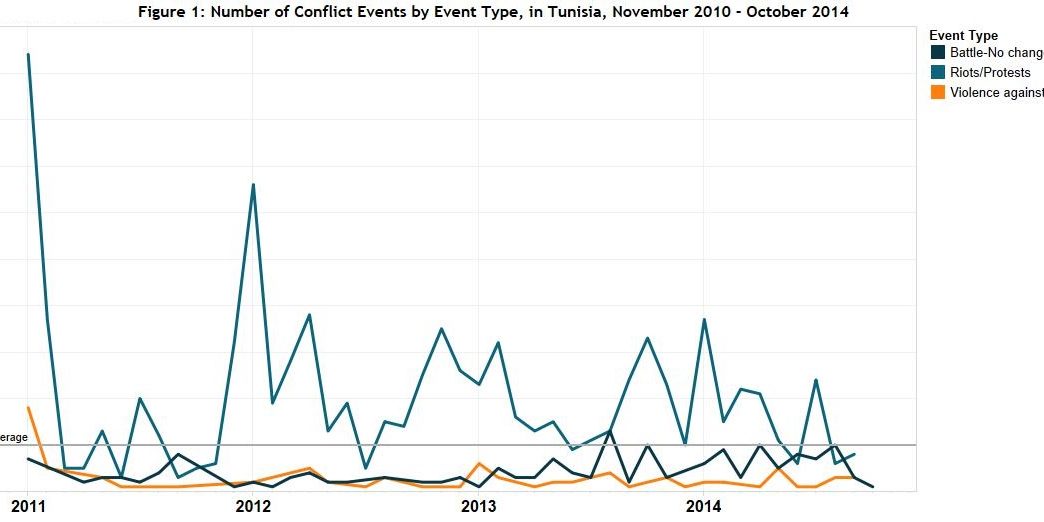 Electoral violence has long spurred debate over the catalysing effects of party rivalries, the strive for democratic institutions, and social divisions on conflict patterns. With parliamentary and presidential elections due to be held in Tunisia on 26 October and 23 November respectively, a number of key factors may be instrumental in shaping conflict in the country over the coming months.

A look at previous elections shows that Tunisia has largely avoided violence during recent voting periods. In October 2011, during Tunisia’s first free election of the National Constituent Assembly (NCA), the levels of riots and protests was below the average level of violent conflict events. The three months immediately following this election, by contrast, witnessed a sharp peak in civil society activity with protesters rallying around unsatisfactory socio-economic conditions (see Figure 1). This post-election unrest centred upon issues such as high unemployment rates (which stood at 18.9% of the labour force) and a lack of infrastructural development (Trading Economics, 2014). However, the intensity of these movements was very low with few casualties. Furthermore, feelings of discontent were not translated into more coordinated attacks between highly organised actors, as there no simultaneous increase in either violence against unarmed civilians or battles in the country (see Figure 1).
The October 2014 elections also do not look set to derail Tunisia’s path to democratic transition for a number of reasons. Firstly, public sentiment appears to have focused on the state of the economy (as opposed to religious policy debates) which has been reflected through greater compromise towards social change (Open Democracy, 13 January 2014). Secondly, party rivalries appear to have been placated by Ennahda’s announcement to not put forward a candidate for the presidential race. This may be an attempt to ensure Tunisia’s path towards sustainable democratic transition, or a measure to solidify their position after largely being blamed for failing to take measures against Islamist insurgency after winning in 2011. This move would suggest that political parties in Tunisia are looking to ensure a smooth transition towards inclusiveness (The Washington Institute, 3 October 2014).
Analysis of electoral violence raises the question of why ‘national-level’ issues create violence in some localities but not in others. Are there spatial characteristics that are conducive to riots in general? An analysis of the distribution of riots and protest events across Tunisia from January – September 2011-2014 indicates that the governorates of Tunis, Medenine, Kasserine, Gafsa, Sfax and Sidi Bouzid have experienced the highest levels of collective action. In order to explain these disparate effects, one useful mechanism is to explore ‘state-level incentives’ that influence rioting behaviour (Wilkinson, 2006).
At a glance, the collective action dynamics in Kasserine appear to support Horowitz’s (2001) argument that rioters are less incentivised to launch confrontational demonstrations when police forces are willing to prevent them by using violence. In the months of January to September each year from 2011-2014, the aggregate number of riots/protests in Kasserine dropped by over 66%. The number of clashes between police and demonstrators also declined. Both of these drops occurred after Tunisian security forces violently repressed peaceful demonstrators in 2011. Compared to other regions in Tunisia, Kasserine accounted for the highest levels of fatalities in events involving state forces vs. protesters/rioters in 2011, with 30 reported deaths between January and September of that year. Further analysis would be necessary to determine whether this drop-off in activity was in fact due to state-level dynamics or other key characteristics inherent to particular locations or actors.