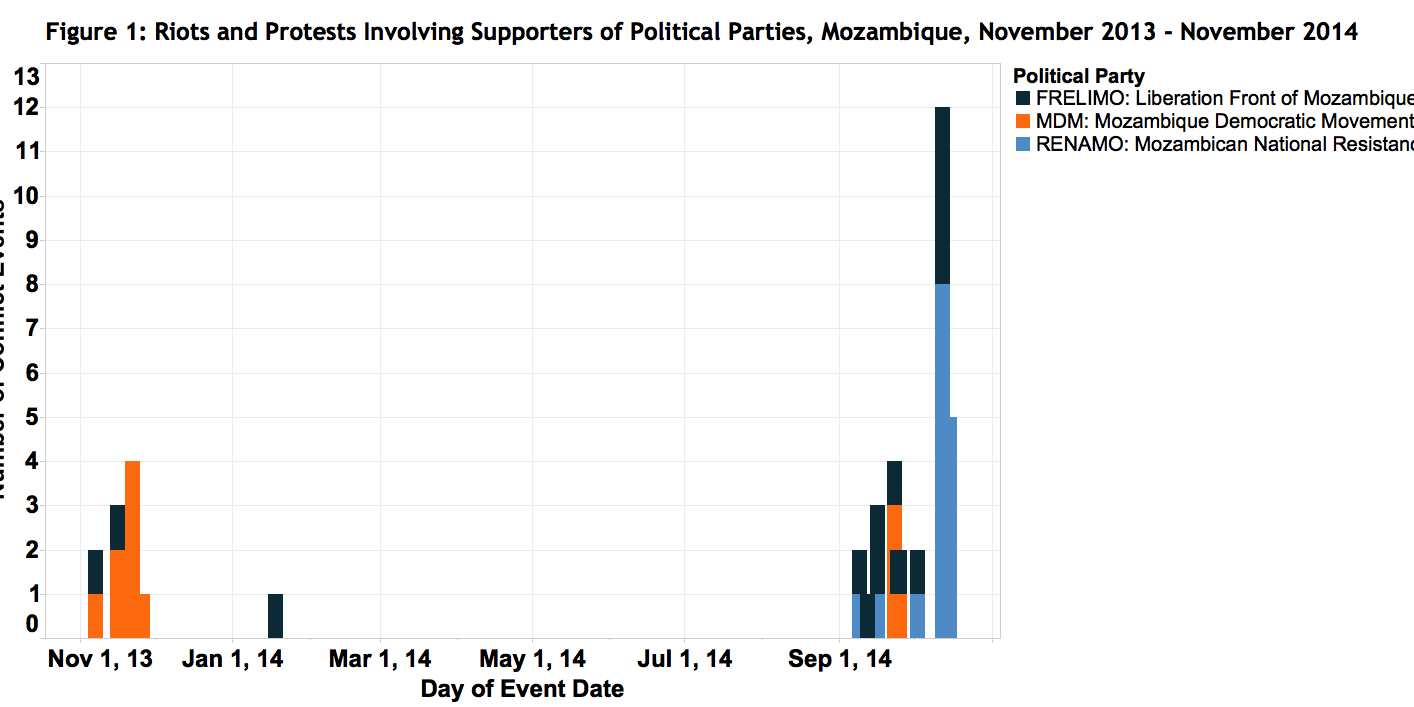 Mozambique continues to see riots and protests surrounding its elections on October 15 last month. In November 2013, Mozambique saw a marked increase in election-related riots and protests in association with its local elections involving the ruling Frente de Libertacao de Mocambique (FRELIMO) party (who have held a monopoly on ruling power since independence from Portugal in 1975) and opposition Mozambique Democratic Movement (MDM) party. Reported election-related unrest occurred almost exclusively in the aftermath of the election (Figure 1).  These riots and protests primarily involved supporters of MDM – attacking supporters of FRELIMO, clashing with police, and demonstrating in response to elections results. MDM made significant gains in the election, and this marked the first time the party entered party candidates to contest local elections since breaking away from the Mozambican Resistance Movement (RENAMO).  However, FRELIMO still maintained a stronghold on power following the election (Southern African News Features, November 2013).

In relation to the general election on October 15, 2014, Mozambique saw a marked increase in riots and protests prior to, the election, followed by an absence of riots and protests by political party supporters as those seen following last year’s elections.  Beginning in early September, Mozambique began to see the highest number of riots and protests seen in recent years – 30 riot and protests were recorded during September and October. This tension prior to the elections may be related to an increased number of battles and instances of violence against civilians reported earlier this year, primarily between, and at the hands of, FRELIMO and RENAMO. Conflict involving the two groups recalls the fifteen-year civil war between the two parties that plagued Mozambique from 1975 to 1992.  Conflict spiked following the annulment of the 1992 peace accord in 2013. Afonso Dhlakama, leader of RENAMO, and current president Armando Guebuza of FRELIMO signed a peace deal on August 24 of this year; since then battles have not again occurred, though the number of conflict events still remains high (Figure 2).  Though battles between the two groups ceased, unrest continued with riots and protests in September 2014 involving supporters of the two groups.

With their focus on conflict while forsaking political engagement, RENAMO suffered in polls last year; MDM made large gains in the 2013 local elections in RENAMO’s absence, winning three of the nation’s four largest cities, largely viewed as the new main opposition party in Mozambique (Reuters, December 4, 2013). Hence, many viewed MDM’s candidate Simango as the only candidate expected to offer any real competition to FRELIMO’s candidate Nyusi (current president Guebuza is constitutionally barred from seeking a third term) (Agencia de Informacao de Mocambique, August 29, 2014). However, RENAMO maintained its grasp on power with its return to the political arena. Though FRELIMO won the presidency as expected, they did so with only 57.3% of the vote (down from the 75% they won in 2009’s presidential election). RENAMO improved its performance, winning 36.6% of the vote, an increase from the 16.5% garnered in 2009. MDM received only 6.4% of the vote (South African Press Association, October 31, 2014).

Figure 3 maps the riots and protests following the 2013 elections as well as those leading up to the 2014 elections. In 2013, the riots and protests in large part involved MDM supporters, with FRELIMO supporters focused on rioting and protesting in central Mozambique. Prior to the 2014 elections, one can see the increased participation of FRELIMO as well as RENAMO supporters in riots and protests (along with a reduction in MDM activity), with FRELIMO supporters expanding their presence across the country. This is likely due to the fact that RENAMO was re-entering the political arena after an absence, and FRELIMO now has more than one political adversary at the polls (an old rival at that). Civil society bodies had warned against the possibility of further violence and unrest following the announcement of election results, though thus far no election-related conflict events have been reported in the country in the aftermath of the election. However, despite the lack of violence, the elections and their aftermath have been far from smooth. The losing political parties (RENAMO and MDM) have been slow to accept the announcement of FRELIMO’s Nyusi as victor. RENAMO’s Dhlakama wants to negotiate a unity government, calling for the total restructure of the state apparatus and security forces to remove FRELIMO influence, claiming that he won the election last month (Mozambique Political Process Bulletin, October 19, 2014). Meanwhile, MDM’s Simango demanded last week that the October elections should be annulled completely, stating his “profound sorrow because these elections were stained by an unequal combat during the election campaign, and in proven acts of fraud and violence they have now had final discredit” (Agencia de Informacao de Mocambique, October 30, 2014). A number of votes were declared invalid at polling stations on election day; some deliberate invalidation of opposition votes had been detected. It is not a surprise that opposition groups have qualms with the election outcome (Agencia de Informacao de Mocambique, October 27, 2014). Future election-related conflict to come is hence not out of the question.