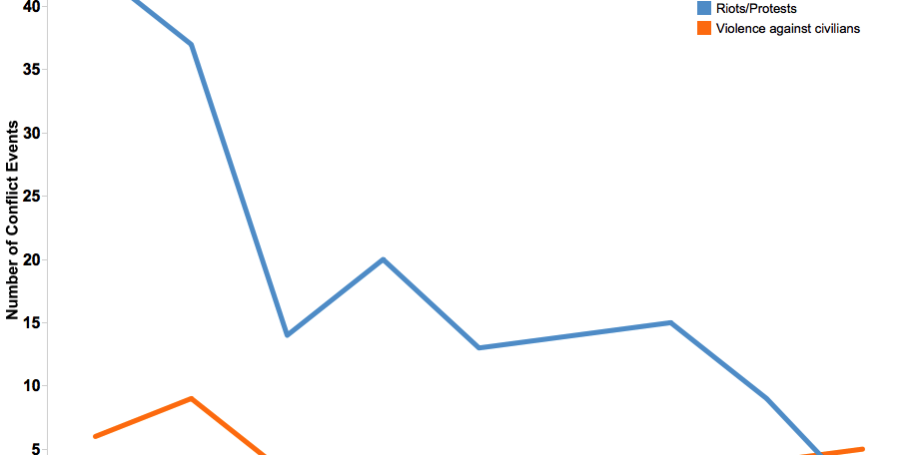 ACLED has released updated data about recent unrests in Burundi. Over the last two months, Bujumbura – and, over time, several countryside towns – have experienced recurring protests and riots from opposition members to President Pierre Nkurunziza’s bid for a third term. Drawing mainly on information displayed on 2015Burundi, we have updated the ACLED dataset. Data from 26 April 2015 to 11 June 2015 were published earlier this month. New data covering conflict events through 26 June 2015 are now available here.
Protests have stopped since 18 June 2015 and clashes between rioters and police forces follow the same trend, though we continue to observe regular occurrences of violent events. Several attacks from unidentified armed groups have targeted both civilians and police forces over the last week, suggesting an evolution in the form of the Burundian crisis.
2015Burundi’s events have been re-coded following ACLED’s methodology. 2015Burundi coded as separate incidents occurring within a single conflict event (e.g., barricades, clashes with police forces, rioters killed, and so on). While this provides further nuance about conflict dynamics, it has the effect of painting the illusion of more activity than what may have occurred on the ground. In order to maintain coherence with the rest of the ACLED dataset, ACLED has merged these incidents into single events, in line with ACLED coding methods. Details and insights about each of the incidents coded by 2015Burundi remains available in the note column for each ACLED conflict event.