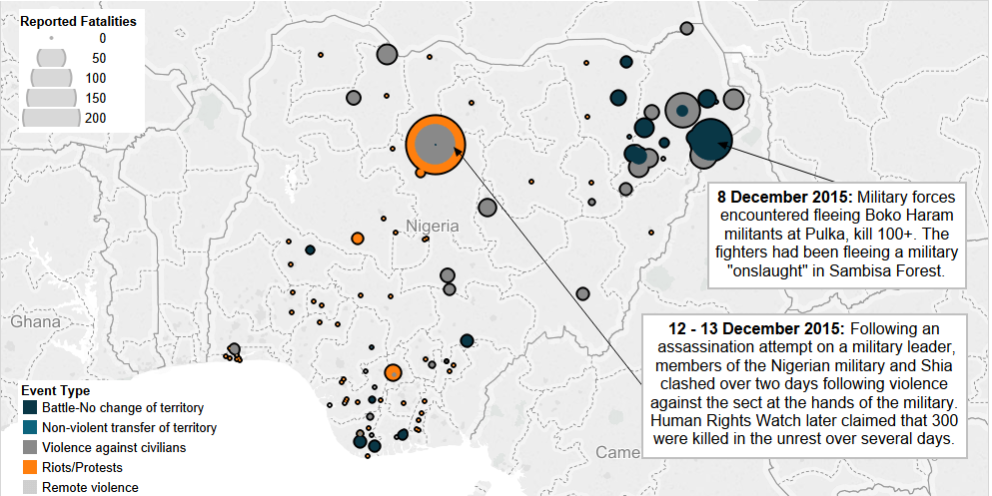 Violence and protest levels in Nigeria in December and early January were fairly consistent with patterns in the final quarter of 2015, where riots and protests were the primary mode of political expression. The majority of violent events in December remained clustered in the northeast, specifically in Borno state (see Figure 1), with Boko Haram remaining the single most prominent actor in instances of battles and violence against civilians. Notable instances of violence against civilians carried out by the group included several suicide bombings which took place in and around Maiduguri on 24, 27 and 28 December, killing more than 60 civilians. 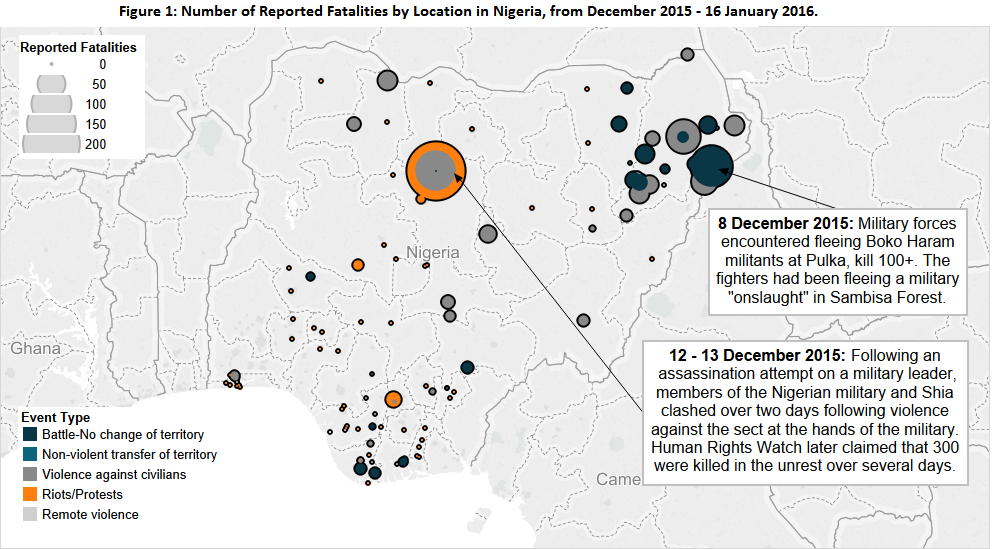 Nigeria saw a rise in fatalities in December (731) as compared to November (264), although the rise represents a slight increase compared to the average number of fatalities over the last few months (fatalities averaged just under 570 per month from July – December 2015). This rise is attributed primarily to two events, one of which is an outlier in the overall violence trends Nigeria has been experiencing over the course of 2015. The first event was a battle between the Nigerian military and Boko Haram in early December in which the military claims to have achieved a decisive victory, killing a large number of fighters and securing the town of Pulka (see Figure 1). The Boko Haram militants had allegedly been fleeing a military bombardment of the Sambisa Forest before being intercepted (Leadership, 9 December 2015).

The second event, the outlier, was the result of a failed assassination attempt against the Nigerian Chief of Army Staff Lt. Gen. Tukur Buratai while he was traveling through Zaria (see Figure 1) on 12 December. This attack was blamed on the Islamic Movement of Nigeria, a largely peaceful group with ties to Iran which has been targeted by both Boko Haram and the Nigerian military in the past. The army claimed that around 500 Shia from the Islamic Movement of Nigeria (IMN) barricaded the road the general’s convoy was traveling on and proceeded to attack it, which led to a clash that caused casualties on both sides (Vanguard, 12 December 2015). Military forces then attacked sites in Zaria arresting the leader of the IMN, Ibrahim Zakzaky. This lead to a two-day long bout of violence in which around 300 Shia were killed in the Zaria area (HRW, 22 December 2015), including the deputy-leader and spokesman of the IMN and members of Zakzaky’s family, and religious sites destroyed (BBC News – Africa, 23 December 2015). Zakzaky’s arrest and the high casualty toll prompted a number of protests in Nigeria. Although a Judicial Commission to investigate the events has since been announced, the IMN has said it will not participate until its leader has been released (Premium Times, 17 January 2016). The events have also clearly strained relations between Nigeria and Iran, and Nigeria’s Islamic spiritual leader — the Sultan of Sokoto — has warned that the army’s actions could spark a new insurgency (BBC News – Africa, 23 December 2015). In general, this development indicates a further deepening of religion as a dominant political identity across Nigeria.