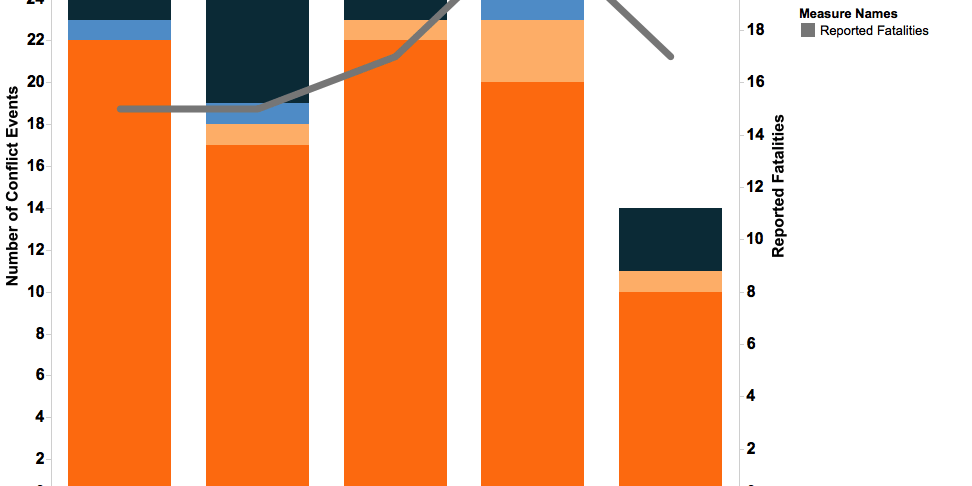 A new update of the recent unrest in Burundi, covering events from 26 April 2015 to 31 January 2016 has been released by ACLED. This update can be found here. ACLED has covered the Burundi crisis with weekly datasets and blog posts since June 2015, relying on a combination of news sources and local crowd-sourced information from the 2015Burundi Project. Starting 1 January 2016, ACLED’s data and analysis for the Local-Level Burundi Crisis Dataset is incorporating localcrowd-sourced data from a local Burundi monitoring network. ACLED reports continue to draw upon real-time data from key news sources as well as 2015Burundi coverage. As before, data from ACLED’s weekly real-time conflict data release covering Burundi continues to be pulled here as well.

As Burundi’s crisis continues into 2016, there has been a steady number of incidences of violence against civilians – at least 10 such events each week. January has seen a total of 82 reported fatalities, with a peak of 22 reported fatalities in the week of January 18. There are reports that gunmen shot dead 3 officials at a bar in Bwiza, including an off-duty policeman, an official of the Ministry of Education, and the chief of Gatate village. Also on January 18 in Rubirizi, 2 bodies were found dumped in palm trees. An unspecified number of bodies were found in the streets of Jabe following explosions on January 21.

Despite the steady rate of violence against civilians, there has been a decrease in the number of reported battles. The first two weeks of January saw a total of 13 reported battles, compared to 5 reported battles in the second half of the month. On January 25, reports state that 7 were killed in Mugamba clashes between security forces and the anti-government Resistance to the Rule of Law in Burundi (RED-TABARA).

Due to the flow of refugees and heightened tension between Burundi and its neighbouring countries, there has been an increase of violence along borders. In Kirundo Province in the north, where Imbonerakure militia are controlling the flow of people and goods, there are reports that 2 men were arrested and beaten for allegedly bringing money from Rwanda to fund rebels in Burundi. On January 25, reports state a militiaman patrolling Rwibikara was beaten by his Imbonerakure peers for accepting a bribe to allow a Burundian trader to send merchandise abroad. The next day in Gitobe, there are reports of Imbonerakure assaulting a girl returning from Rwanda, demanding to know why she had fled. In early February 2016, a leaked United Nations report contained allegations that Rwandan military personnel are training Burundian refugees who want to overthrow Burundian President Pierre Nkurunziza (BBC, 4 February 2016). In Makamba Province in the south, people found to be returning from Tanzania or wanting to go into exile in Tanzania have been arrested and beaten by police and Imbonerakure. Police also arrested 8 youth in Bujumbura for being of Congolese origin, although they carried Burundian identity cards.

January also saw the start of an inter-Burundi dialogue in Kirundo. However, opposition groups boycotted the talks, calling them a farce meant to appease international onlookers (Deutsche Welle, 20 January 2016). Amidst one-sided talks and increased violence along the borders, new evidence is also coming to light regarding the events of December 11. Reports state that on Burundi’s deadliest day of the crisis since it began in April 2015, pre-dawn attacks on 3 military garrisons near Bujumbura led to at least 87 reported deaths. This triggered violent police searches and killings of civilians and suspected rebels. Witnesses alleged that mass graves were secretly dug on December 11, with at least 25 people buried in Mpanda and 28 in Kanyosha. New satellite imagery is consistent with accounts of graves in Buringa and Mpanda, north of Burundi’s international airport, and in Kanyosha, south of Bujumbura (Amnesty International, 28 January 2016). With video footage of disturbed earth in December compared to the same areas with undisturbed earth in November, these images show the approximate location of suspected mass graves. If proven, the existence of secret grave sites would indicate an effort by security forces to lessen the number of fatalities discovered and reported. ACLED data now reports 37 civilians were killed by security forces on December 11 and 12. 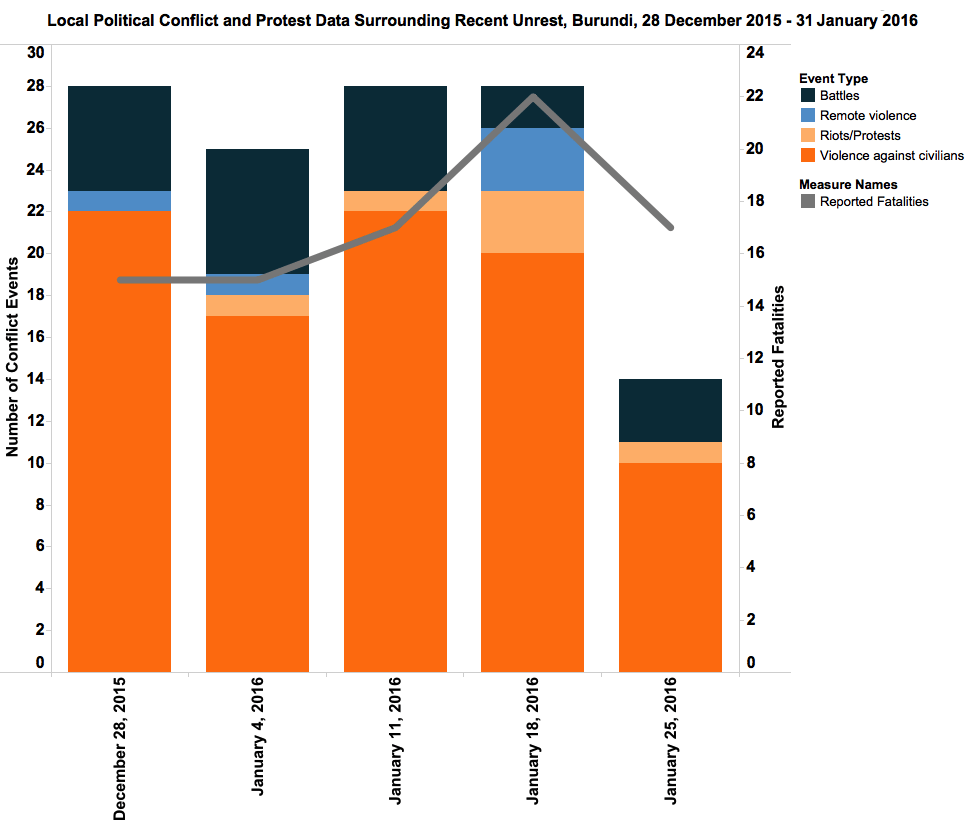 The Local-Level Burundi Crisis Dataset covers data from 26 April 2015 through January 31. However, as we have altered our primary source of local-level data in 2016 – from 2015Burundi to a local Burundi monitoring source – we refrain from depicting data from both sources temporally on the same graph here, and would advise our users to consider doing the same. This is done to avoid increases in the level of reporting between the 2 sources inadvertently depicting changes in the level of conflict and protest occurring on the ground. We are in the time intensive process of back-coding 2015 events captured by the new data source.