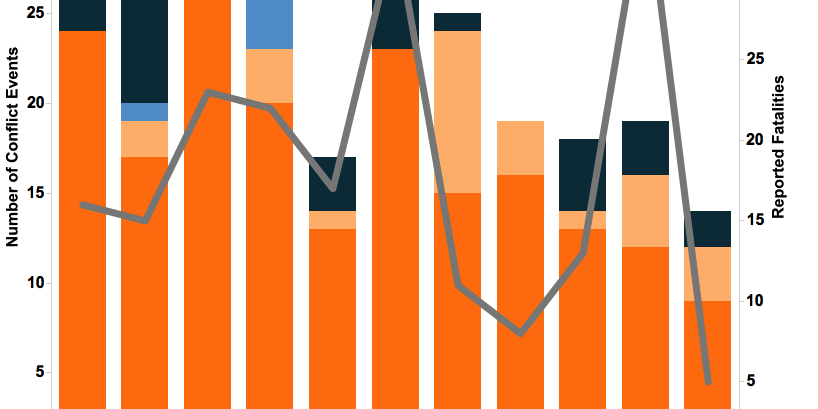 A new update of the recent unrest in Burundi, covering events from 26 April 2015 to 13 March 2016 has been released by ACLED. This update can be found here. ACLED has covered the Burundi crisis with regular data updates and blog posts since June 2015, relying on a combination of news sources and local crowd-sourced information from the 2015Burundi Project. Starting 1 January 2016, ACLED’s data and analysis for the local-level Burundi Crisis dataset is incorporating local crowd-sourced data from a local Burundi monitoring network. ACLED reports will continue to draw upon real-time data from key news sources as well as 2015Burundi coverage. As before, data from ACLED’s weekly real-time conflict data release covering Burundi continue to be pulled in here as well.

Summary of trends for week of March 7:

Burundi saw a dramatic decrease in the number of reported fatalities in the week of March 7. With five fatalities reported, it is the least deadliest week in 2016 thus far based on reports. However, the ratio of battles (14%), riots and protests (22%) and violence against civilians (64%) has remained consistent compared to the previous two weeks.

Between March 7 and 9, politically-related violence against civilians were reported in seven of Burundi’s 17 provinces. In the central provinces: in Muramvya, a body was found in a river near Kanerwa Hill; in Gitega, a body was found beaten and stabbed, and a woman was wounded by an unknown group wielding machetes; in Mwaro, police beat a pregnant woman in Kiyange. In the eastern province of Ruyigi, Imbonerakure beat and arrested a man in Intende. In the northern provinces: in Kirundo, a decapitated body was found in a banana plantation in Nyabikenke; in Kayanza, Imbonerakure beat a FRODEBU activist accused of boycotting elections. And in the southern province of Rutana, a man was tortured and killed by unknown assailants. This trend of scattered incidences reveals that violence is occurring nationwide and is not solely concentrated in the capital provinces of Bujumbura Mairie and Bujumbura Rural.

On March 12, anti-Rwanda protests were reported in Makamba, Bururi, and Kayanza Provinces. Residents of Mabanda in Makamba reportedly participated out of fear that they would be punished or accused of supporting rebel groups if they did not join the march. Protests in Mabanda were reportedly attended by the President of the Senate of Burundi.

As conflict continues, Burundi’s already poor economic system and health services are in further decline. In February, inflation rose to 6.7%. In a country that relies heavily on tea and coffee exports, the inflation rate for food in the past year was 10.9%, as reported by Burundi’s Institute of Economic Studies and Statistics (Reuters, 18 March 2016). This week, the European Union (EU) announced its suspension of aid to Burundi, citing that authorities have not done enough to stop the conflict (The Guardian, 15 March 2016). EU aid for 2014-2020, projected to be worth €432m, has been aimed at projects in energy, rural development, public finances, health, and justice reform. With the decline in aid and economic stability, the risk of disease and lack of health services has also been heightened. Egypt recently announced that it will send medical aid and equipment to support Burundi citizens during the crisis (Egyptian State Information Service, 15 March 2016). 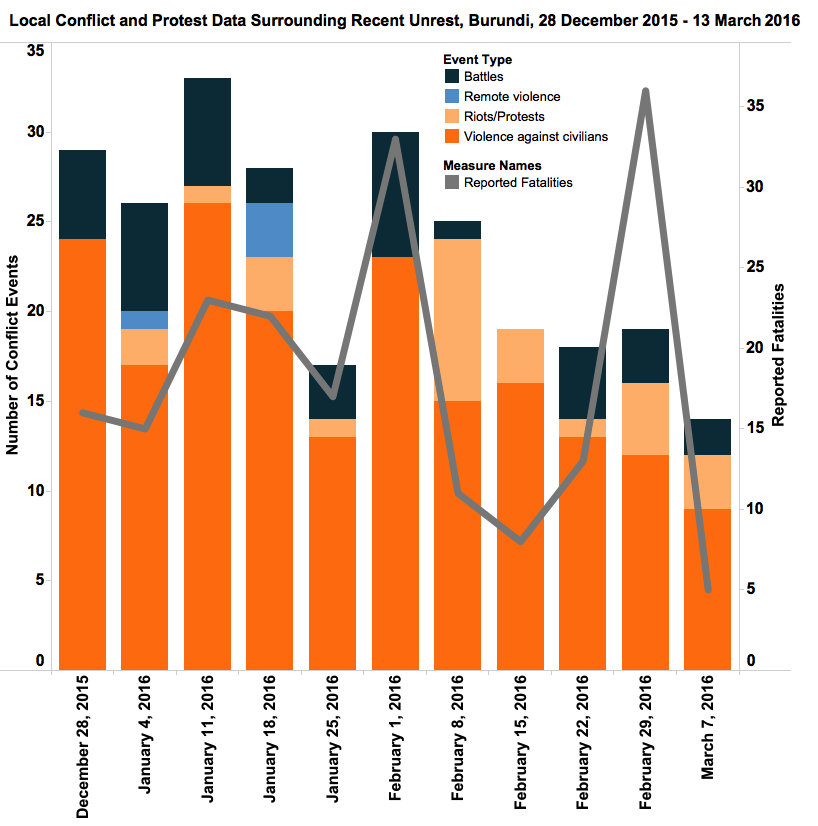 The local-level Burundi Crisis dataset covers data from 26 April 2015 through 13 March 2016. However, as we have altered our primary source of local-level data in 2016 – from 2015Burundi to a local Burundi monitoring source – we refrain from depicting data from both sources temporally on the same graph here. This is done to avoid increases in the level of reporting between the 2 sources inadvertently depicting changes in the level of conflict and protest occurring on the ground. We are in the time intensive process of backcoding 2015 events captured by the new data source.