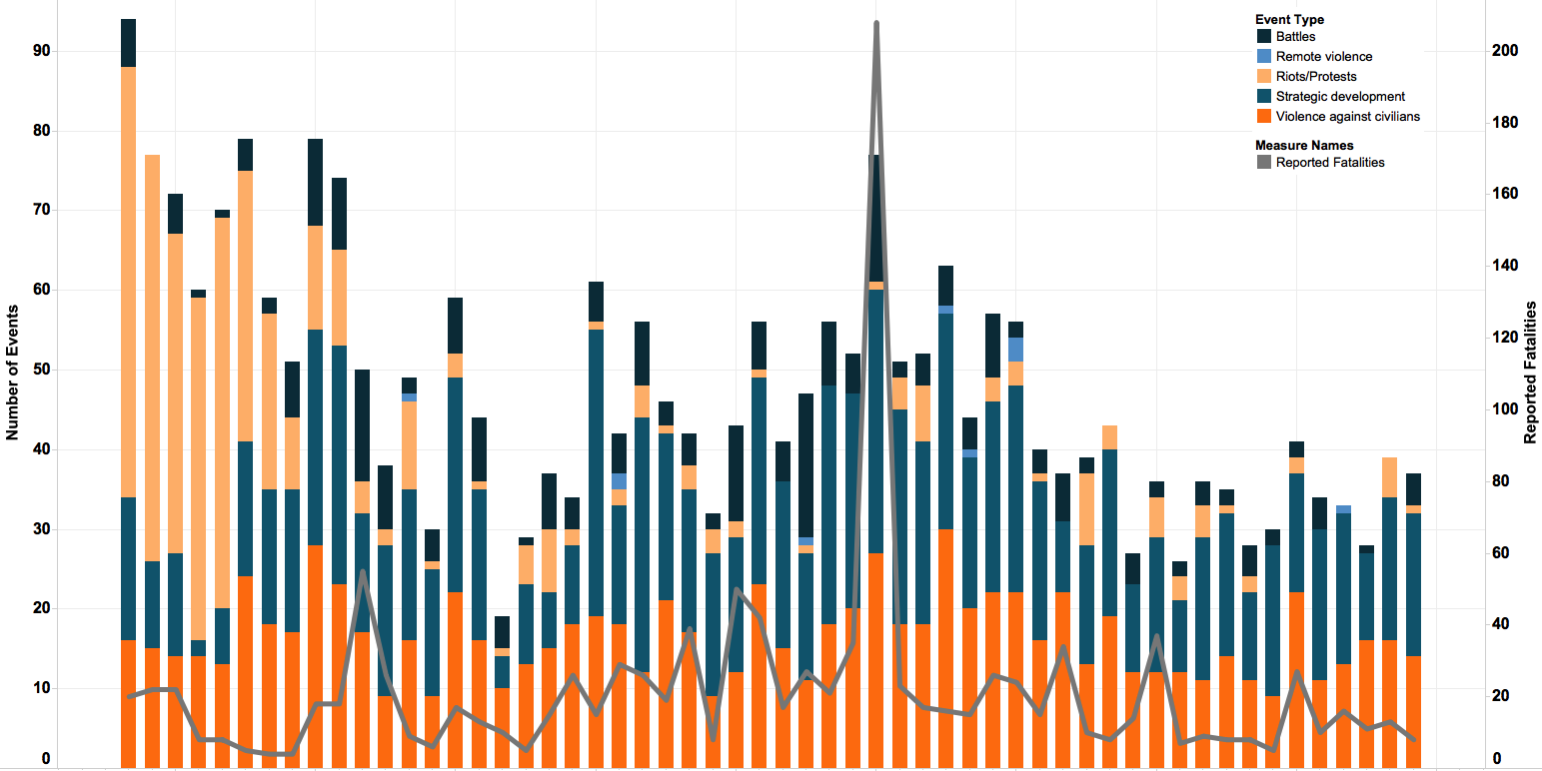 A new update of the recent unrest in Burundi, covering events from 26 April 2015 to 22 May 2016 has been released by ACLED. This update can be found here.

Trends for the week of May 15:

In the week of 15 May, both the number of conflict events as well as reported fatalities remained relatively unchanged (see Figure 1). 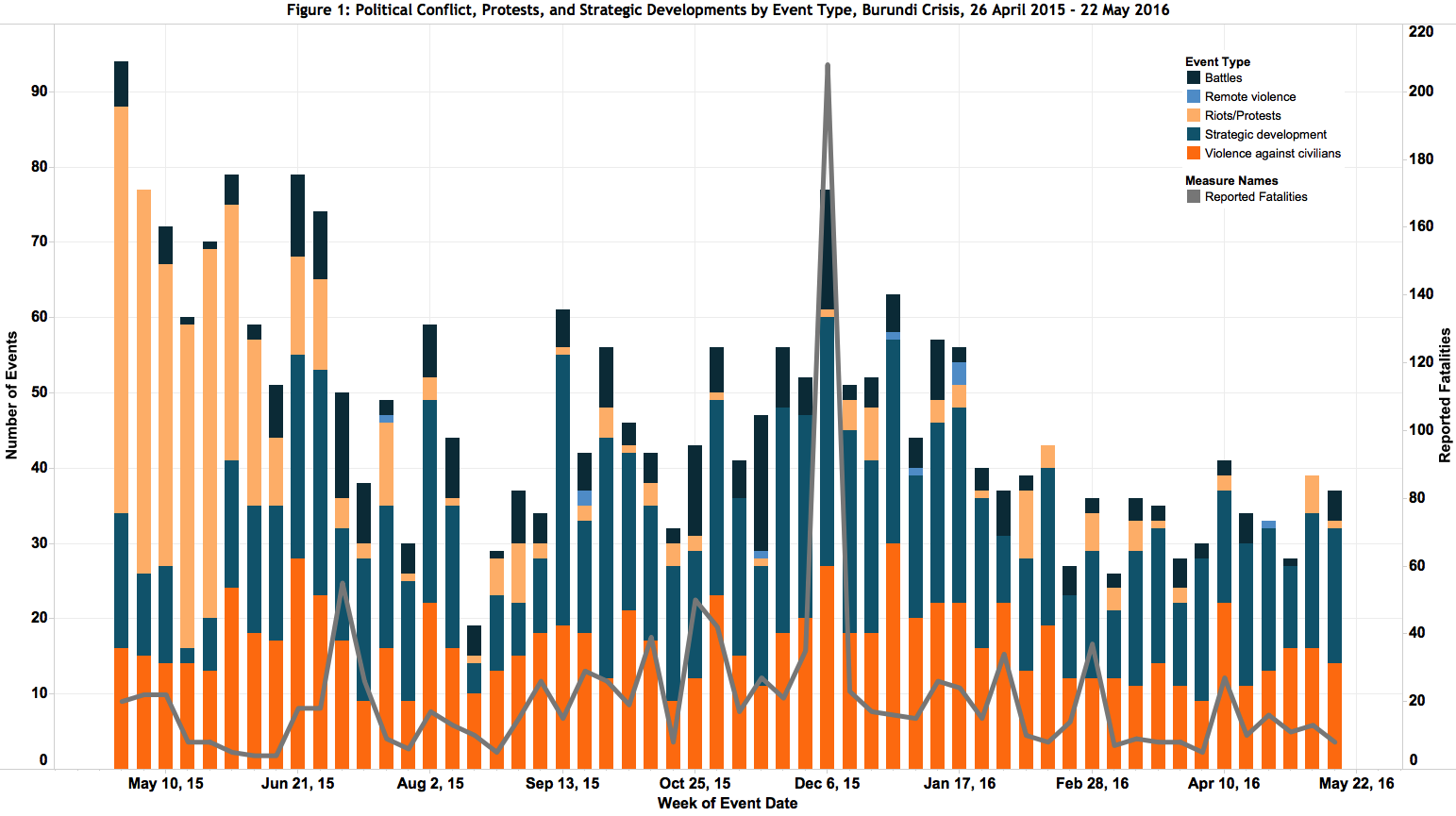 Although there was a slight decrease in the overall number of incidences of violence against civilians, former soldiers continue to be the target of police searches and assaults, and incidents of violence against civilians continue to occur across the country. On 16 May in Ruyigi Province, policemen beat a former solider accused of wanting to overthrow President Pierre Nkurunziza. Violence against civilians has also been carried out by unidentified armed groups and vigilante militias throughout the northern provinces of Cankuzo, Karuzi, and Ngozi; the southern and western provinces of Bubanza, Bujumbura Mairie, Bururi, Makamba, and Rumonge; and the central province of Muramvya (see Figure 2). Incidents include one on 16 May, when a FRODEBU activist was wounded with a machete by three unidentified people in the Mutobo area of Makamba Province. On 20 May, three people in Masaka hill of Bubanza were injured following an assault by a group armed with machetes, clubs, and guns. And, on 16 May in Rumonge, a local source reports that a vigilante militia beat a suspected rebel in Gahinda. 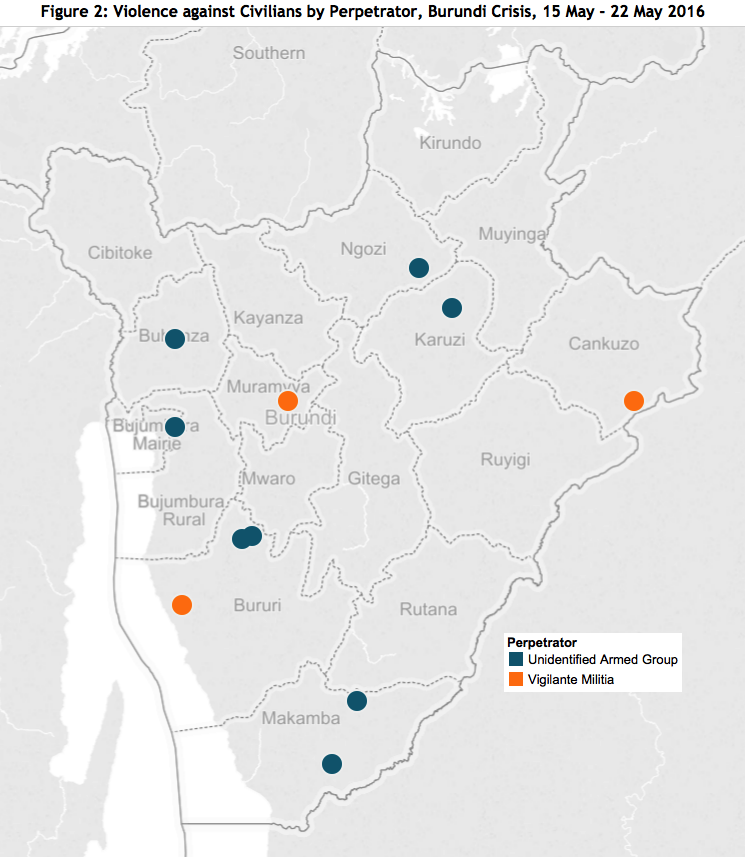 Suspicion of rebel activity is also leading police to be on alert for illegal weapons and signs of travel to neighboring countries. On 19 May, two men were arrested after residents of Gisuru in Ruyigi Province alerted the police to people who were converting Tanzanian currency into Burundian Francs. On 19 May, military forces arrested four youths in Ruhinga in Bururi Province, for the alleged possession of illegal weapons; they were previously suspected by a policeman of being part of a rebel movement.

Large-scale raids were carried out in Musaga and Ngagara on 18 and 19 May, during which 47 civilians were arrested, though no reports suggest that weapons were found. Local sources report that arbitrary arrests without just cause are common, where the arrested individuals are forced to pay a sum of 20.000BIF before being released.

Arrests and denouncements of anti-government protesters also sparked multiple assaults. On 16 May, high school students in Muyange-Kavumu in Bururi, threw stones at a schoolmate accused of denouncing people involved in third-term protests. On 21 May also in Bururi, an armed group shot and injured a youth accused of collusion with the police regarding the arrest of anti-Nkurunziza protesters.