Since 1947, control of the Greater Kashmir region (formerly the Princely State of Jammu and Kashmir) has been a topic of continual dispute between India and Pakistan. The two nations have fought three wars over the territory, and the physical conflict remains ongoing with “ceasefire violations” from both sides occurring across the Line of Control (LoC). As it stands, the majority of the region exists as two political entities. On the one hand, the Pakistan-controlled part of the territory, called Azad Jammu and Kashmir (AJK), is a self-governing territory administered by Pakistan with its own elected officials. On the other, Jammu and Kashmir (JK), the Indian-controlled territory, is a state within India which has been granted special autonomy under Article 370 of the Constitution of India. Importantly, an Armed Forces (Special Powers) Act (UNHCR, hosted by US Department of Justice) was passed and applied to the state in 1990, and has been in effect ever since. This was in response to separatist agitations and militant insurgencies (led by HM: Hizb-ul-Mujahideen and LeT: Lashkar-e-Taiba) in the state, which both continue in strength to this day.

Ignoring the insurgency, riots and protests make up the bulk of the separatist movement in JK, especially since July 2016 when the state entered a period of increased agitation known as the “Burhan Aftermath”, a name derived from the July 8 killing of HM commander Burhan Wani – -the graphs displayed below begin from the week of this event. Although it is fueled by many different factors, the agitation stems primarily from the fact that JK is a Muslim-majority territory being administered by a Hindu-majority state. As such AJK does not experience the same level of unrest as JK, where demonstrations often turn to stone-pelting and clashes with security forces (see graphs below). 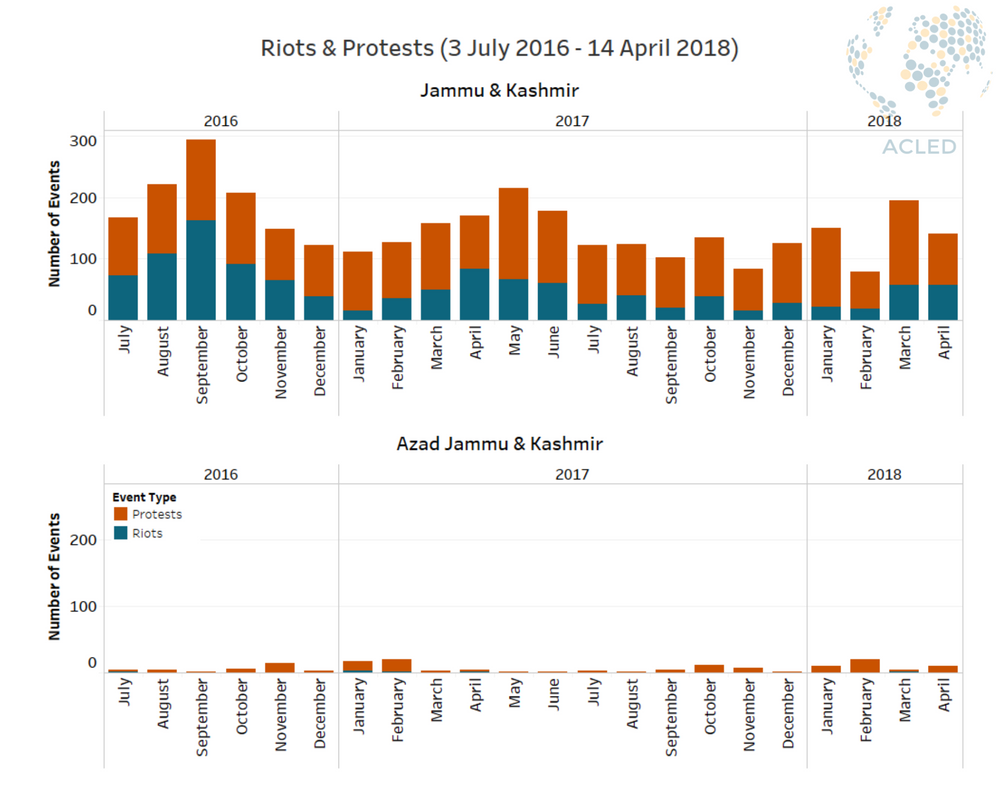 That being said, the two territories are still linked, both by an ideology of a pan-Kashmiri people and by the protest culture connected to the region. While separatist leadership can be seen leading weekly demonstrations in JK, the role of protests in AJK is more supportive. As can be seen in the graph below, protest spikes in AJK are almost entirely related to events across the border. Five days in particular are traditionally days of protest in AJK, with large anti-India and pro-separatist agitations (often led by the AJK branches of All Parties Hurriyat Conference [APHC] and/or the Jammu and Kashmir Liberation Front [JKLF]) being held in Muzaffarabad or New Mirpur and, occasionally, in all the district headquarters. Additionally, mass protests sometimes occur in AJK following particularly violent encounters between Indian security forces and rioters in JK, especially when there are casualties on the side of the rioters; the April 2, 2018 protests in AJK were a reaction to an unusually lethal encounter the day before in Shopian District, JK, between police, HM and LeT militants, and rioters. 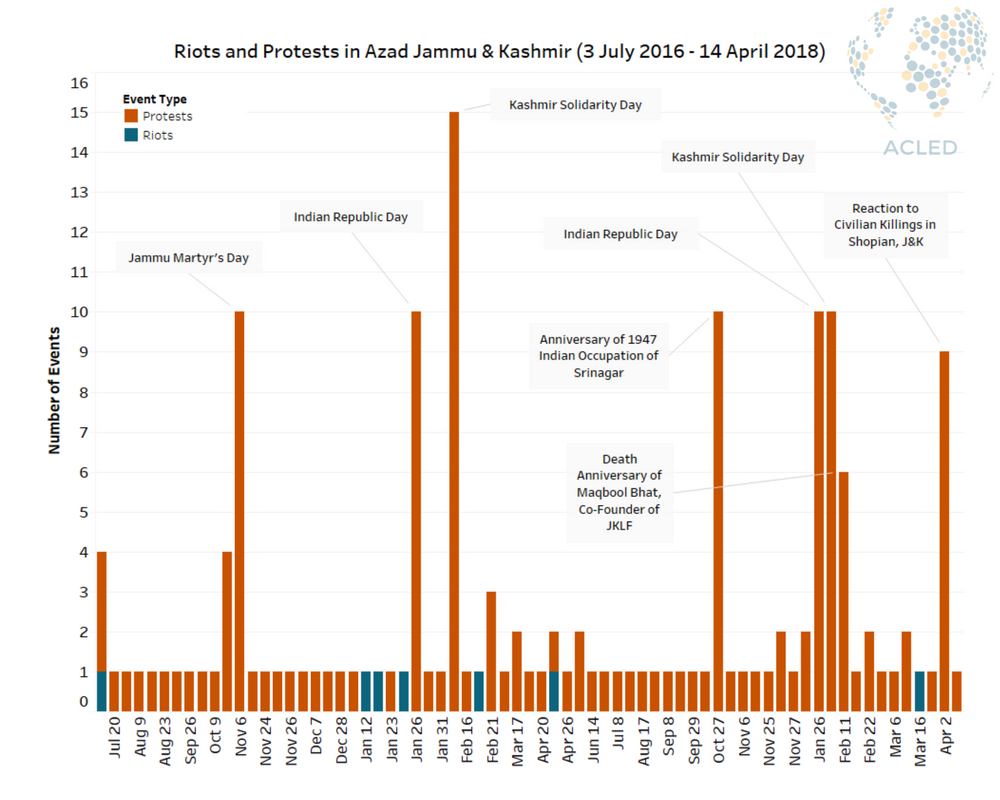 Consequently, while the situation on the ground is much different in both territories, AJK can still be seen as supporting the Kashmiri agitation in its own way by offering international support to its Indian counterpart.