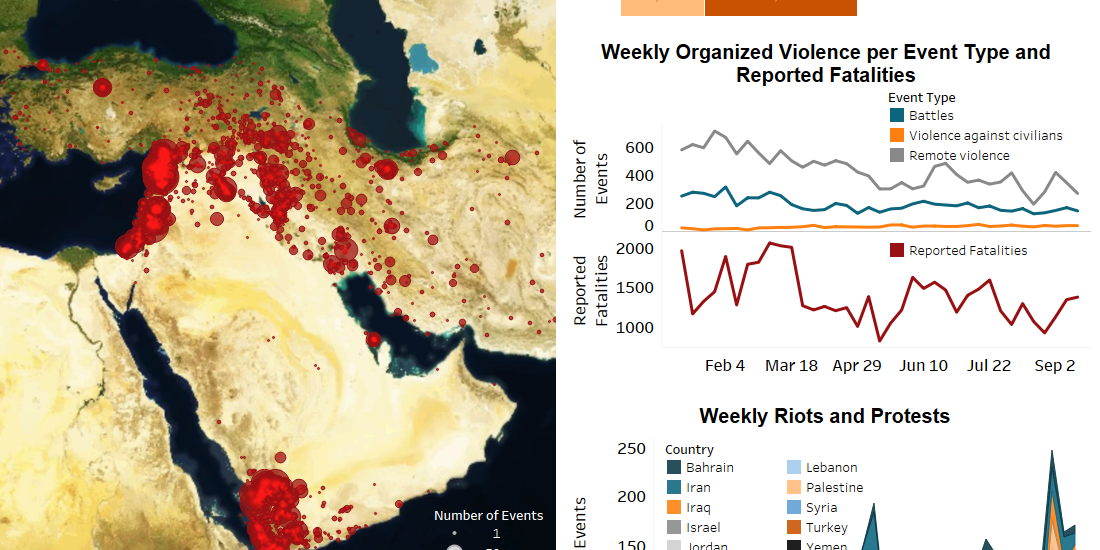 Conflict continued at a similar level throughout the Middle East region last week relative to the week prior. In Syria and Yemen, long-planned offensives began and moved forward at a slow pace. In Turkey and Iraq, fighting continued against Kurdish rebel groups in both Iraqi Kurdistan and the Turkish southeast. In Palestine and Bahrain, demonstrations increased, the latter as a result of religious suppression by the ruling regime. While in Iran, a large scale attack on a military parade offered a rare glimpse into the country’s own insurgency.
Last week in Palestine was one of the more fatal weeks in recent months, with 8 people reportedly killed in both Gaza and the West Bank. Of those deaths, 4 were as a result of continued clashes between Israeli security forces and rioters along the Gaza border. There were also a number of Israeli raids made on villages in the West Bank, several of which led to clashes. The pending demolition of Khan al Ahmar, a Palestinian Bedouin village east of Jerusalem, has led to a growing number of demonstrations and has been criticized as a war crime by local and international groups (Haaretz, 13 Sept 2018).
In Iran on September 22, 4 men disguised as soldiers opened fire on an annual Iranian military parade in the southwestern city of Ahvaz. At least 28 people (including the attackers) were reportedly killed and more than 60 were injured, making this the deadliest attack in nearly a decade. The Arab separatist group Al-Ahvaziya claimed responsibility for the attack, as did the Islamic State (IS) through its Amaq channel.
In Bahrain, security forces removed Ashura banners from several towns and villages, which led to clashes with residents in at least one instance. Authorities also summoned at least 6 Bahraini Shiite religious figures over the content of their religious sermons delivered during the annual Muharram commemorations, and arrested at least 2 of them (Press TV, 17 Sept 2018). Thousands of Bahrainis mourn the Ashura every year, which is a culmination of a 10-day mourning period during the Islamic lunar month of Muharram honouring the martyrdom of the Shiite third Imam. Since February 2011, ongoing anti-Al Khalifah regime demonstrations have occurred throughout the country against its oppression of the Shiite majority.
Meanwhile in Iraq, IS attacks increased throughout the country last week, the majority of which were IED attacks targeting military vehicles, particularly those belonging to Popular Mobilization Forces (PMF). At the same time, Iraqi military and Global Coalition forces also increased the number of their raids and airstrikes on IS positions, thwarting several attacks by destroying VBIEDs and reportedly killing dozens of militants.
In the north, the Iraqi central government has decided to deploy federal guards along the border between Turkey and Iraqi Kurdistan in response to the intensified attacks by Turkish military forces over the past few months (Xinhua, 17 Sept 2018). Turkey has been targeting Turkish Kurdistan Party (PKK) militants in northern Iraq for several years, typically conducting airstrikes which violate Iraqi airspace. Last week alone, Turkish warplanes and artillery hit at least 7 targets in the Dahuk and Erbil governorates of Iraqi Kurdistan.
In Turkey’s southeast, fighting continues between the PKK and government forces in the Kurdish majority provinces, particularly Sirnak and Hakkari. In one noteworthy battle, the PKK’s news source reported that the group killed 20 Turkish soldiers during an attack on a military post in Semdinli district of Hakkari province.
Meanwhile, in Yemen, heavy clashes continued in Hodeidah city around the Kilu 16 junction, which National Resistance Forces managed to capture 2 weeks ago. Last week, members of the Giants Brigade only managed to advance slightly more towards the city’s university and port areas. At the same time, the Saudi-led coalition has been launching a large number of airstrikes on pro-Houthi fighters in and around the city. One airstrike, for which both sides deny responsibility, reportedly killed 18 fishermen off the coast in Khawka, Hodeidah governorate.
In Sadah governorate, pro-Hadi forces advanced close to Jabal Marran, the hometown of the Houthis. Pro-Houthi forces, on the other hand, are advancing on the Nihm front in Sana’a governorate and on the al Malagim front in al Bayda governorate.
In Syria, Syrian Democratic Forces (QSD) supported by the Global Coalition began their offensive against IS’ last enclave in the Hajin area on the eastern bank of the Euphrates River. The start of this new offensive will most likely lead to a rise in asymmetric counter attacks, such as IEDs, due to the relatively limited size of the area in relation to the high concentration of IS militants and civilians.
Additionally, for the third week in a row, Israeli warplanes struck several Syrian regime military sites in Lattakia and Banyas. During the attack in Banyas, the Syrian anti-aircraft system accidentally targeted and downed a nearby Russian transport plane, reportedly killing all 15 people aboard.
Meanwhile, large-scale peaceful demonstrations continued across the northwest of Syria (for more information on the protests from previous weeks see this ACLED infographic). Last week they were held in at least 84 locations across Idleb, Hama, and Aleppo. Protesters called for the downfall of the Assad regime and demanded that the opponents of the regime stop them from carrying out a military offensive against Idleb and its surroundings. Weekly Friday protests are likely to continue in the area. 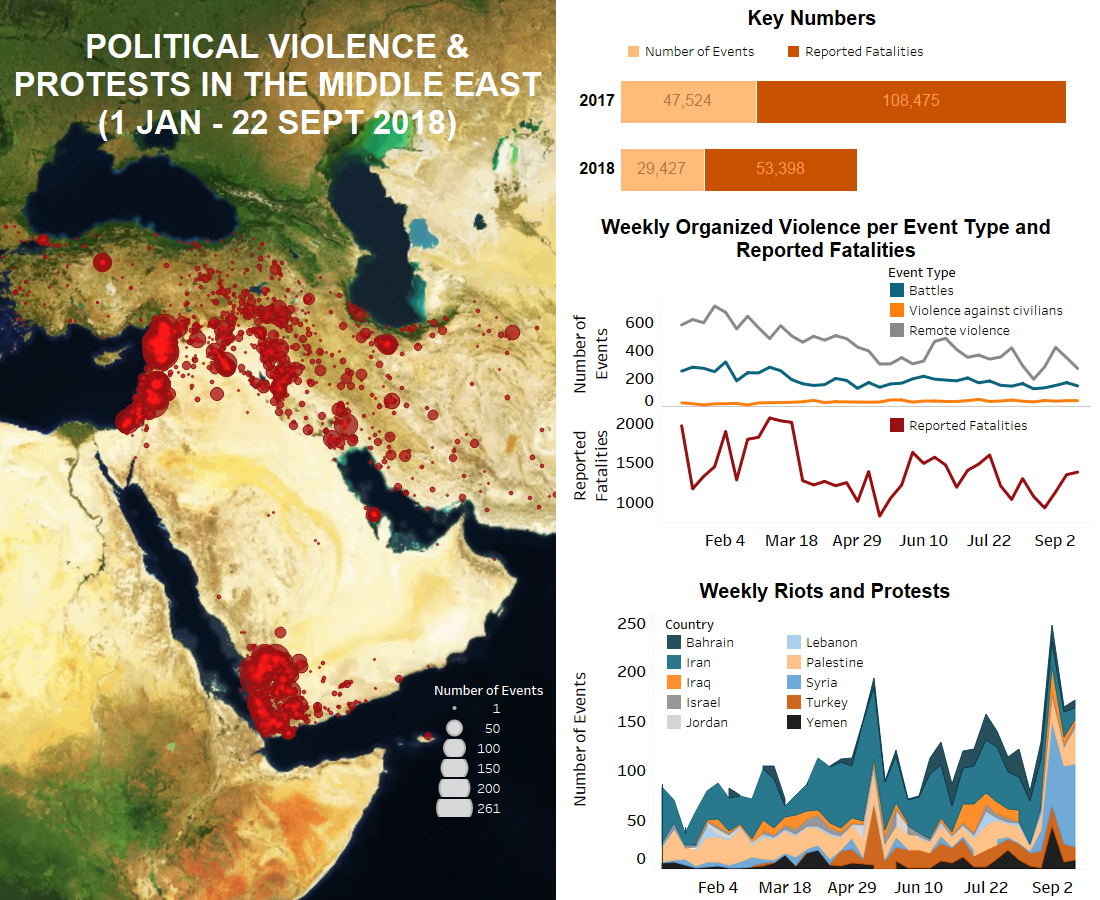