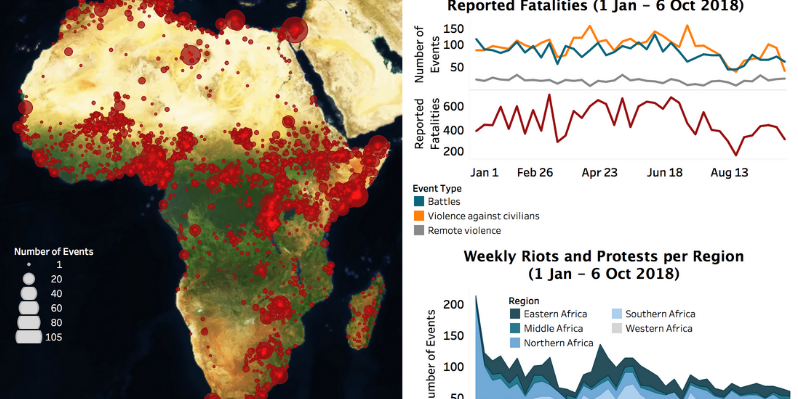 The developments reported during the first week of October 2018 show a continuation of overall levels of political violence across Africa between August and September.
Among the countries that witnessed a significant escalation of the violence in September were Burkina Faso, Cameroon and South Sudan.
Burkina Faso is increasingly destabilised by operations against Islamist militants in the Sahel region and by the opening of a new front by a suspected coalition of Ansaroul Islam and Islamic State (Greater Sahara) militants in the Est region. Last week, militants laid several ambushes on the military forces across the Sahel, Est and Nord regions. France carried out its first air raids on the territory to support the Burkinabe forces as they came under attack in Inata in Soum province (Sahel region) on October 3rd and in Kabonga in Kompienga province (Est region) on October 6th. This further underlines the severity of the threat of the Islamist violence in Burkina Faso.
In Cameroon, the government’s heavy counter-insurgency operations against the Ambazonian separatists in the Anglophone regions are accompanied by the state’s increased targeting of civilians. September 2018 was by far the most violent month recorded in the ACLED dataset for Cameroon. Last week, tensions were particularly high as the Anglophone regions celebrated on October 1st the anniversary of their independence from the UK and of the declaration of “independence” made by Anglophone separatists a year prior. The regions were placed under curfew but fighting and violence against civilians by the security forces still occurred around Buea (Sud-Ouest) and in Bambili and Wum (Nord-Ouest). Violence also rose ahead of the presidential elections due to be held on October 7th, which the separatists threatened to disrupt. Clashes between the Cameroon forces and separatists were reported in Bafia in Fako and in Otu in Manyu (Sud-Ouest) on October 5th. On the same day, the state forces also opened fire on civilians at an IDP camp in Tole in Fako, leaving three people reportedly killed.
In South Sudan, despite a continued de-escalation of the fighting between the government and the main opposition Sudanese Peoples Liberation Army/Movement-In Opposition (SPLA-IO) between May and August, which culminated in various peace initiatives, fighting resumed in full force between the two sides in September. There were 25 incidences of fighting reported in September in various areas of Central Equatoria, Unity and Western Bahr el Ghazal, compared to only four recorded in August and 10 in July. Last week, the two fought again in Central Equatoria. Several factions also announced their split from groups that signed the Khartoum Declaration of Agreement reached between the government and the SPLA-IO, such as the South Sudan Opposition Alliance, casting further doubt on the viability of the agreement.
By contrast, the levels of political violence significantly reduced in the Central African Republic (CAR) in September compared to August. The downward trend had much to do with the reduced fighting for control around Bria and Yalinga in Haute-Kotto between Anti-Balaka and ex-Seleka forces. The last clashes between the two groups occurred on September 6th outside of Bria and resulted in the abduction and reported killing of at least nine IDPs by one of the groups. The appeasement might be due to the joint commitment to work for peace and political stability made by the main CAR armed groups in Khartoum end August at a meeting instigated by Sudan and Russia. The signing of a new agreement in Bria last week between an Anti-Balaka faction under Ramazani’s command and the Popular Front for the Renaissance of Central Africa (FPRC) could lead to a further reduction of the violence in CAR’s Haute-Kotto. 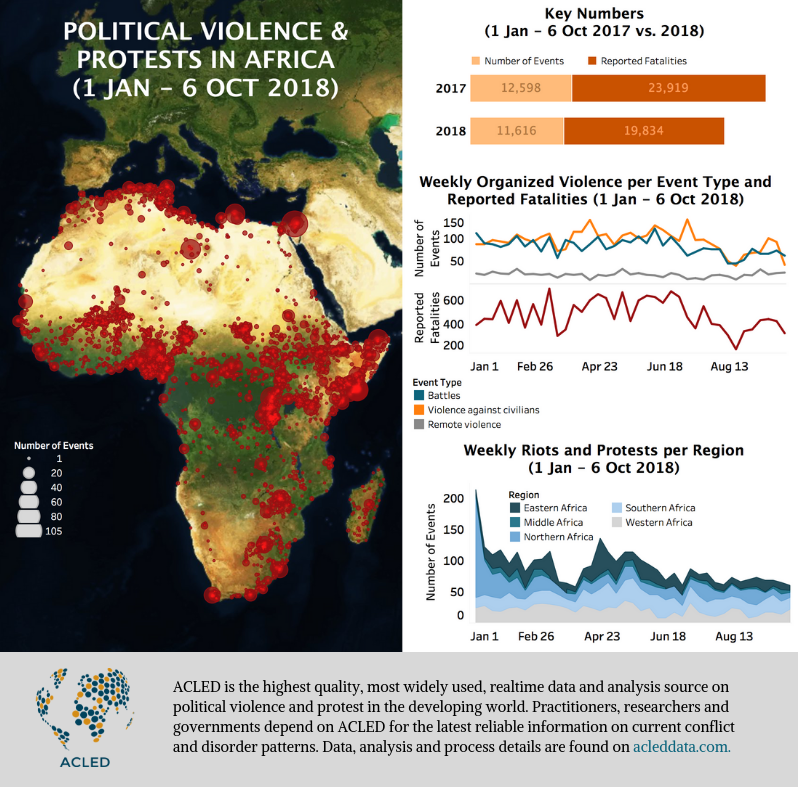