Key developments in the week of December 2nd include the escalating Islamic State activity in Egypt and Burkina Faso; the instability posed by other Islamist militants such as in Mozambique; and the high tensions in Togo and Ethiopia.
The Islamic State is nearly as strong in Africa in 2018 as when it peaked in 2015. Since October, activity by Islamic State militants has significantly risen across Northern, Western and Eastern Africa and this trend is likely to continue.
In Egypt, Islamic State militants have been detonating IEDs against the Egyptian forces with increasing frequency since late September, mostly in the Al Arish, Sheikh Zuweid and Rafah areas of North Sinai. The military forces have recently escalated their campaign against the militants, shelling villages west and south of Rafah on multiple occasions. Last week, at least 10 episodes of battles and IED attacks were reported resulting in nearly 40 fatalities. Shelling by the Israeli army was also reported in the Al Arish and Rafah areas last week, the first time since early 2017, underlining the growing pressure facing the military in the region. This came despite a shooting incident between the Egyptian police and the Israeli army along the Sinai border on November 24th, and around the same time as Israel announced the formation of a new brigade to strengthen its border defence battalions. Israel shares a long border with the Sinai province and has been cooperating for several years with Egypt to secure its borders from Islamic State infiltration as a result.
In Burkina Faso, the Islamic State in the Greater Sahara (ISGS) continues to destabilise the eastern regions. Activity by the militants peaked so far in September, with nine attacks in the Est region, more than double the average number of monthly attacks by the group since January. It remained high in October and November, moving further into the Sahel and Centre-Est regions. Last week, ISGS militants attacked members of the military police in the area of Bougui near Fada N’Gourma (Est) as well as on the road between Dori and Seytenga (Sahel). The militants have shown various modes of operation over recent months, from armed attacks on police and military bases to IED ambushes, burning down schools and threatening teachers, and setting up illegal checkpoints.
Activity by other Islamist insurgents also remains sustained across a number of other countries. Despite a reduction in the Boko Haram activity in 2018 compared to the three previous years, the militants continue to threaten the stability of Nigeria, Cameroon and Niger with weekly episodes of armed clashes with the state forces and of targeting of civilians including through suicide bombings. Last week, two suicide bombers detonated again at a market in Maiduguri in Nigeria, injuring five members of the Civilian Joint Task Force. In Mozambique, attacks by suspected members of an Islamist group referred to as Ahlu Sunna Wal Jamaa (ASWJ) are reviving and starting to be countered by village militias, while the uncertainty persists around ASWJ’s precise identity and aims. Since November 20th, seven attacks have been carried out by the group, resulting in nearly 30 fatalities, while only six attacks had been reported in the previous four months.
Meanwhile, last week, tensions were high in Togo and Ethiopia. In Togo, violence erupted during opposition protests against the parliamentary vote due to be held on December 20th, resulting in two people killed. At least 11 protests have been held since November 17th in various parts of the country by thousands of opposition supporters denouncing irregularities in the electoral system and calling for the resignation of president Faure Gnassingbe.
In Ethiopia, protests are rising again in the context of ethnic tensions. On November 28th, two attacks by gunmen from the Benshangul-Gumaz region on police and civilians from the Oromo ethnic group in the East Welega zone left at least 27 people killed. Previous attacks had occurred in similar circumstances already earlier in the month. Nearly 30 protests have been held since late November, mostly in the Oromia region, to denounce the violence and to call for the regional forces in Oromia to be better armed. Protests also began in the Tigray region on December 8th over marginalization, reminiscent of the grievances that motivated the large-scale protests that rocked the Oromia region over 2015-2017. The protests in Tigray are likely to continue as activists have been reported to increasingly use social media as a mobilization platform. 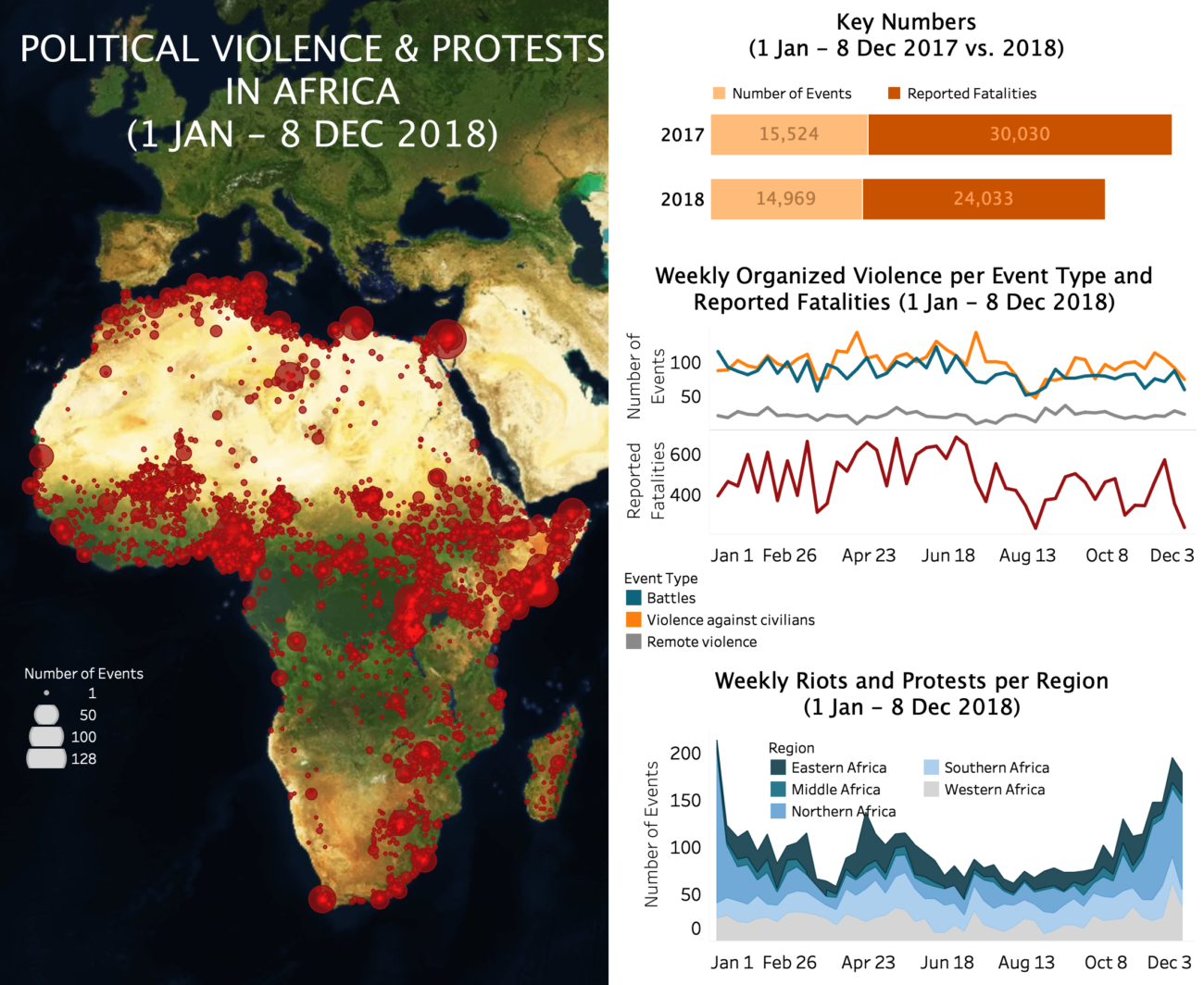