Key developments in Africa in the week of December 9th include the show of force by Boko Haram suicide attackers in Cameroon, the election-related violence in the DRC and Somalia, and continued rise in protests in Northern Africa.
In Cameroon, within the space of one week between December 6-13th, Boko Haram militants launched at least five suicide bombing attacks – four in the Kolofata and Mora communes of Mayo-Sava department and one in the Waza commune of Logone-et-Chari. Although most of these attacks were successfully countered by military or community forces, they represent a significant escalation compared to the rest of the year. Only four suicide attacks have been carried out by Boko Haram this year, two of which were in January, one on October 2nd and one on November 28th – all were in Kolofata. The latter attack led to the reactivation of village militias on Cameroon’s northern border with Nigeria, indicative of the anticipated threat posed by the group as the end of the year approaches, including in areas where its influence reduced this year. As of December 15th, 2018, the number of organised violence events involving Boko Haram in Cameroon reduced by 65% compared to 2017. The shift is largely driven by a significant reduction of activity in Mayo-Sava department, along the border with Nigeria’s Gwoza and Bama LGAs, and a small rise further north in Logone-et-Chari, around the Lake Chad.
In the Democratic Republic of Congo (DRC), political violence rose again last week ahead of the December 23rd presidential elections, highlighting the deeply contested nature of the polls. Most visible was the burning of a warehouse holding election material in Kinshasa on December 12th, damaging 8,000 of the 10,000 controversial new voting machines planned to be used in the city and raising further fears that the elections will be undermined by logistical challenges. Both sides traded blame after the incident. Violence also escalated at rallies of opposition leaders of the Lamuka Coalition (LC) and of the Union for Democracy and Social Progress (UPDS) in Kalemie (Katanga) and Mbuji Mayi (Kasai-Oriental), respectively. The police forces used unprovoked live ammunition against supporters at these rallies, leaving at least four killed. Lastly, several clashes occurred between party supporters. As they gathered in Kindu (Maniema) and in Lubumbashi (Katanga) to welcome their leader, Martin Fayulu, LC supporters clashed with those of the ruling Peoples’ Party for Reconstruction and Democracy (PPRD) and the police. In Bandalungwa in Kinshasa, they clashed with those of the Alliance for Change (APC).
Two other incidents were notable in Africa last week. First, presumed militants of the Islamic State in the Greater Sahara (ISGS) carried out one of the their most violent attacks on civilians in Mali. On December 11-12th, they attacked Dawsahak camps in the Menaka commune of Mali’s Gao region, killing 42 people and retreating toward the Nigerien border. This highlights once more the growing and transnational nature of the ISGS threat in the region.
Second, the arrest of a former Al Shabaab leader (Mukhtar Robow) in Somalia’s Baidoa (Bay region) on December 13th triggered unplanned clashes between Ethiopian troops and armed men thought to be his supporters. This reportedly left 11 people dead. Protests and riots were also held in the three days following his arrest, while 200 people were said to have been arrested by December 15th. Robow surrendered last year and is running to be president of the South West state in elections due to be held on December 19th. Last week’s violence raises fears of an escalation of the violence in the region ahead, during and after the elections.
Lastly, the level of protests and riots has continued to rise in Northern Africa over the past month, reaching its highest levels of the year. Over 50 riots and protests were reported just last week across Algeria, mostly calling for improvements in socio-economic conditions. In Tunisia, nearly 30 such episodes were recorded last week, mostly led by teachers, students and lawyers and calling for reforms in their respective employment sectors. Lastly in Libya, the Anger of Fezzan movement protesting poor living conditions in the south gained significant traction with protests reported in 15 locations in the span of only December 12-14th. 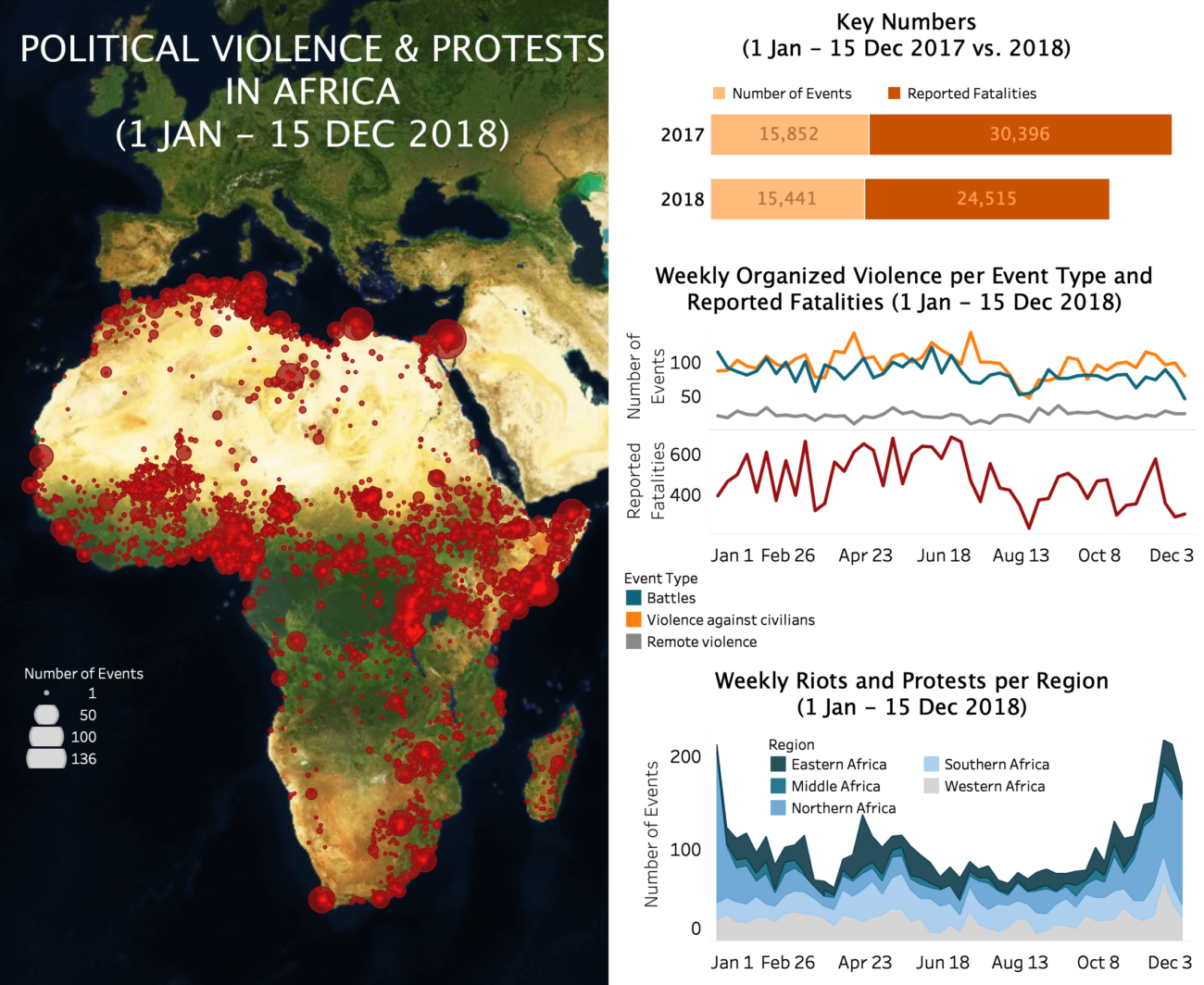