Key trends in the South and Southeast Asian region last week include: targeted attacks in Afghanistan stemming from the Taliban spring offensive (and the Easter bombings early this week in Sri Lanka); violence involving domestic rebel groups in Pakistan, Myanmar, Indonesia, the Philippines, and Thailand; election-related violence and disorder in both India and Indonesia; and unrest stemming from farming and land disputes in Myanmar, Cambodia, and Thailand.
Early this week was marked by a series of coordinated bomb attacks on churches and hotels in Sri Lanka. The attacks which reportedly killed more than 300 people are the deadliest attacks in the island nation since the end of the civil war 10 years ago. While no group has yet claimed responsibility, the government blames two local Muslim groups — National Thowheeth Jama’ath (NTJ) and Jammiyathul Millathu Ibrahim (JMI) — for the attacks (Al Jazeera, 23 April 2019). As these attacks occurred on Sunday, April 21, they will be included in next week’s data release; ACLED publishes data each Monday/Tuesday covering the Sunday through Saturday of the week prior.
In Afghanistan, the Taliban spring offensive – dubbed Al-Fath – moves forward despite ongoing peace talks with American diplomats. Fighting was particularly heavy in Ghazni province last week, which has been a focal point for the group since summer 2018, when they briefly captured the provincial capital. On 18 April, the Taliban claimed to have captured the district headquarters of Giro, although Afghan state forces responded by saying they had earlier moved the headquarters to a more secure location. Elsewhere in the province, Taliban assaults and state counter-assaults were significant in the districts of Ghazni and Gelan. In the northwest, fighting was also heavy in the border district of Murghab, Badghis province, which has been under increased Taliban pressure since the beginning of 2019.
Meanwhile, the Afghan branch of the Islamic State (IS) claimed responsibility last week for a suicide bombing and a subsequent small arms assault on the Telecommunications Ministry building in Kabul, reportedly killing seven people. IS has been responsible for a number of high profile attacks in Afghanistan, typically targeting Shiite gatherings, political officials, and foreigners, in Kabul and Jalalabad (for more on that, see this ACLED analysis). However, continued fighting with Afghan/NATO forces, as well as other militant groups like the Taliban, have significantly reduced the group’s national presence.
Elsewhere in Asia, organized violence involving domestic rebel groups was reported from several countries. In Pakistan, following the bombings on April 12 in Balochistan, security forces stepped up their operations against armed groups including Tehreek-i-Taliban Pakistan (TTP) and Sipah-e-Muhammad Pakistan (SMP), a Shia militant organisation involved in sectarian violence. Separatist violence, meanwhile, continued in Balochistan province when armed men executed 14 passengers of a bus, including Pakistani security personnel, traveling between Karachi and Gwadar. Baloch Raaji Aajoi Sangar (BRAS) or Baloch National Freedom Front, an alliance of several separatist groups, claimed responsibility for the attack.
In Myanmar, fighting between the Arakan Army and Myanmar military was ongoing in Mrauk-Oo, with the military shelling villages in the township. With the unilateral four-month ceasefire declared by the military coming to an end this month, clashes between the Kachin Independence Organization/Kachin Independence Army (KIO/KIA) and Myanmar military broke out late last week in northern Shan state.
In Indonesia, the West Papua National Liberation Army (TPNPB) clashed with the Indonesian military in Papua province; the clashes occurred as West Papua activists called for a boycott of the election. Meanwhile, there was an increase in the number of clashes between the New People’s Army (NPA) and the Philippine military last week. In Thailand, suspected separatists reportedly shot dead a defense volunteer in Pattani while a deputy village chief was killed in Yala.
In other developments, election-related events continued to be reported from India and Indonesia. In India, voters cast their votes in the second phase of the 17th general elections (Lok Sabha) on April 18. Demonstrations and incidents of electoral violence continued to be reported across the country, especially in Jammu & Kashmir, Tamil Nadu, and West Bengal. In East Tripura, the constituency polls had to be deferred from April 18 to 23 owing to the poor law and order situation in the state (Time8, 17 April 2019). Maoist rebels continue to launch attacks on government targets, reportedly killing a female polling officer in Odisha’s Kandhamal district. Another 20 people were reportedly killed in armed clashes with militants and amid electoral violence in India last week.
In Indonesia, a handful of protests and riots were recorded last week in connection with the election, largely arising from people dissatisfied with not being able to vote or unhappy with the outcome. While results will not be finalized for several weeks, Joko Widodo looks to have won a second term as president.
Finally, farming and land disputes led to demonstrations in the Southeast Asia region last week. In the Sagaing region in Myanmar, a dispute over land led to a clash between farmers and government officials. Forced eviction in Sihanoukville in Cambodia led to a riot as demonstrators fought against the eviction. Further, farmers in Thailand protested over the Ministry of Agriculture’s failure to provide promised financial assistance. 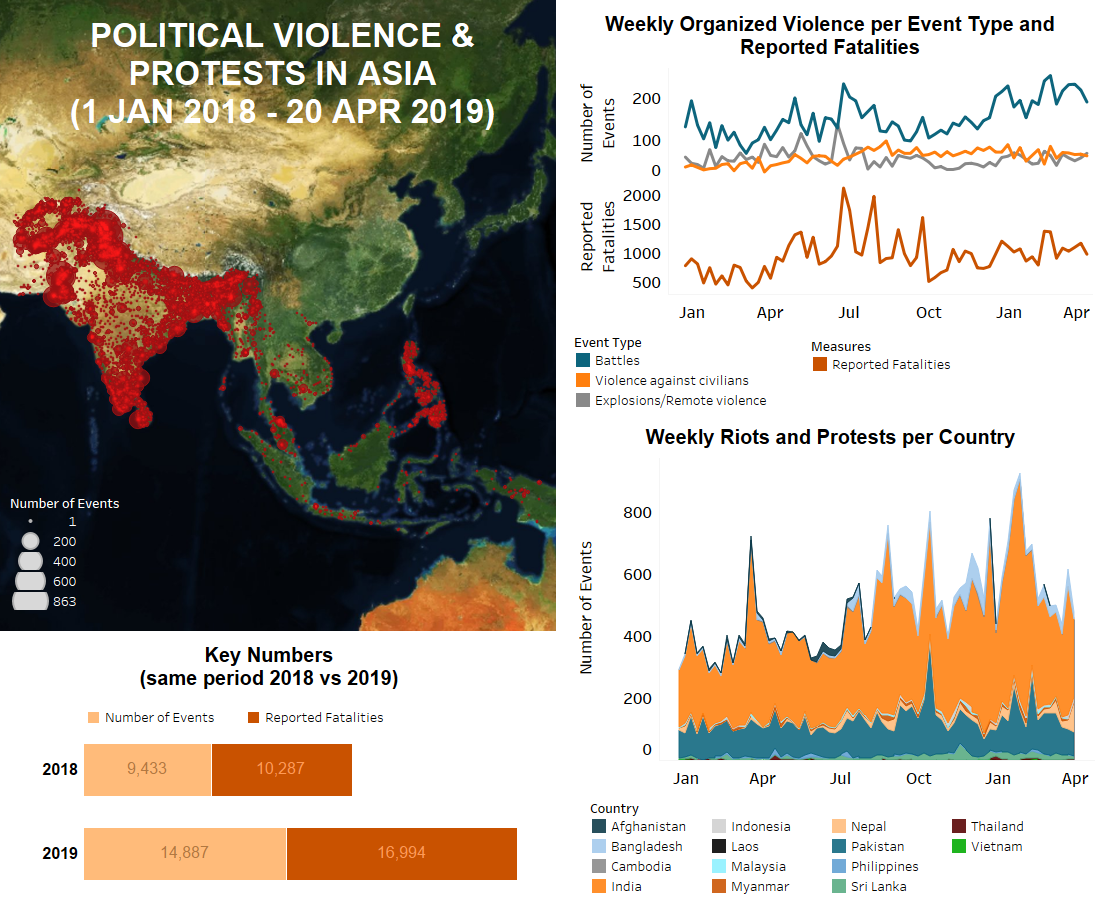