The First Step on a Long Road: Public Demonstrations and Political Reform in Sudan

The ouster of Omar al-Bashir as President of Sudan following weeks of public demonstrations has been rightly hailed as a historic change; however, the removal of Bashir has not signified the end of the protest movement. Public demonstrations demanding political reform have continued since Bashir was pushed out of office by the military on April 11th. Since Bashir was removed from office, there have been fewer instances in which protest events have been dispersed by the government.  It remains to be seen how long this will last given the tensions between the civilian political movement and the Sudanese military.

From Bread Prices to Bashir’s Parting

Widespread demonstrations emerged in Sudan in mid-December 2018, when the government announced a removal of a subsidy that kept the price of bread artificially low. The protesters’ demands quickly shifted from the issue of bread prices to broader complaints about the Sudanese political system. The scale of the demonstrations is impressive not only in the sheer number of demonstration events (more than 550 reported, of which more than 500 involved peaceful protesters), but also in geographic scope. Though much attention has been paid to the persistence of demonstrators in Khartoum, there have been demonstration events in more than 90 locations in Sudan.
The demonstrators in Khartoum exhibited a remarkable capacity for organization and persistence since Bashir’s ouster: since April 11th, more than 70 demonstration events were reported in more than 30 locations throughout the country (see map below). 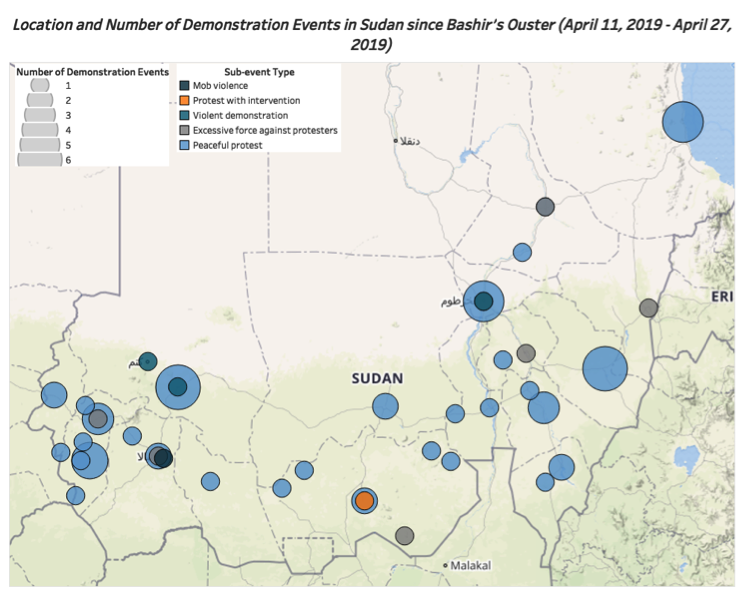 Reports have emerged of demonstrators organizing medical tents and entertainment for the protesters, in addition to engaging in negotiations to shape the characteristics of the transitional government and post-Bashir Sudanese political order. Professional unions, united under the Sudanese Professionals Association, have been integral to organizing the public demonstrations and “two large political coalitions of civil society groups and opposition parties — the Sudan Call Forces and the Alliance of the National Consensus Forces — signed the Freedom and Change Charter, which demanded the resignation of the regime and a civilian transition government to usher in a new democratic era” (The Washington Post, April 15, 2019).
Continued public demonstrations led to the near-immediate removal of Bashir’s successor, General Awad Ibn Ouf. Ouf was rejected by the protesters for having been too close to the Bashir administration. In addition to being sanctioned by the US government for his role in the Darfur conflict, Ouf had previously served as Bashir’s vice president and defence minister (The Irish Times, April 13, 2019).
Since Bashir’s removal, the Sudanese government intervened in fewer of the public demonstrations. Prior to Bashir’s removal, 36% of demonstration events were dispersed protest events (nearly 9% with excessive force) where those demonstrating exhibited no violence yet were met with dispersion and/or violence. Since April 12, however, the proportion of demonstration activity comprised of dispersed protest events has fallen to just over 3% — with non-dispersed protests comprising the bulk of activity. This shift is not a function of a decline in protest activity, as demonstrated below. 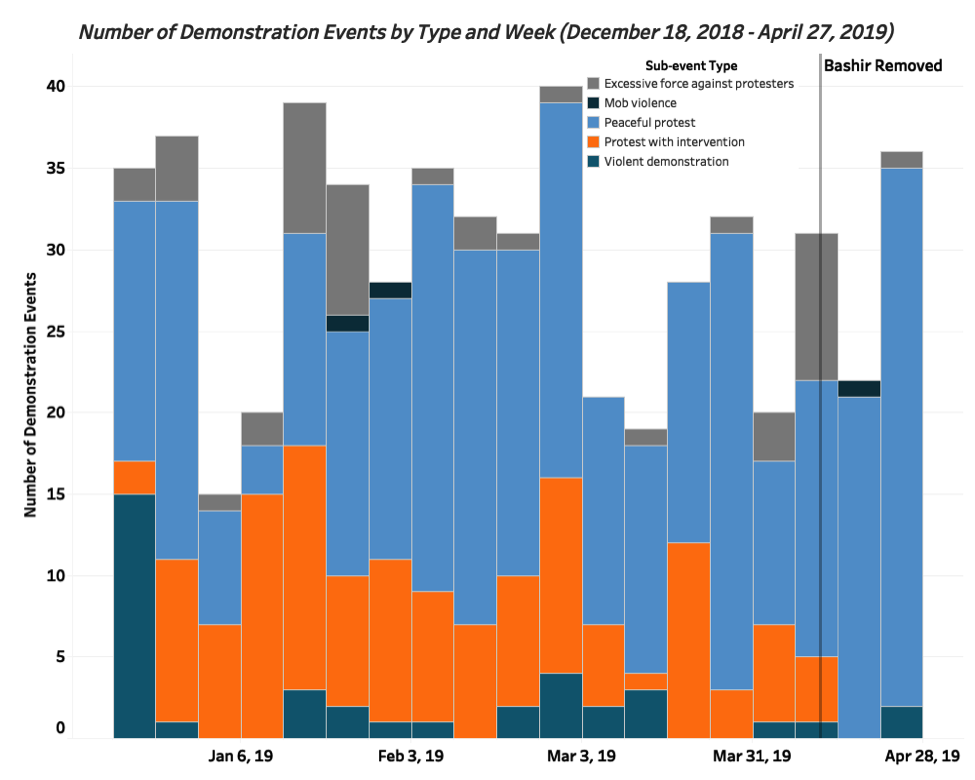 Though civil society groups celebrated Bashir’s exit, many have condemned it as a military coup and continue to press for civilian control of the government (BBC, April 12, 2019). The Sudanese Professionals Association (SPA) released a statement in the aftermath of the military’s removal of Bashir, stating that “those who destroyed the country and killed the people are seeking to steal every drop of blood and sweat that the Sudanese people poured in their revolution that shook the throne of tyranny” and continued organizing demonstrations (BBC, April 12, 2019).
In the process of removing Bashir, the military also declared a state of emergency, introduced a curfew, and announced that the country would be governed for two years by a transitional military council (TMC). These moves have contributed to friction between the military and demonstrators who claim that no legitimate change can emerge from a military government (The Guardian, April 12, 2019).
Dialogue between some of the political opposition groups and the TMC has revealed some fundamental disagreements between the two. According to Al Jazeera, the military and the political opposition are divided as to what the best composition is for the governing body tasked with running Sudan until the next round of elections. Whereas the military wants a 10 member council with seven military representatives, the political opposition is pushing for a 15 member council, comprised of eight civilians and seven members of the military.
The issue of unity both in the Sudanese security sector and among the demonstrators remains pressing, and will likely be the determinant as to what type of council is composed. Though some of the political opposition groups have demonstrated their willingness to negotiate with the TMC, others (including the influential SPA) have been reluctant to engage (News24, April 24, 2019). Fissures within the security sector have become clear throughout the wave of demonstrations and could lead to fragmentation (Reuters, April 8, 2019).
Though popular demonstrations have removed Bashir, they have not yet secured a democratic future for Sudan. It is unclear how long the military will tolerate continued demonstrations, or how ‘useful’ the security sector believes public action is now that Bashir has been removed. Last week, the government began to issue warnings to protesters to remove blockades established as part of the sit-in in Khartoum; the leader of the TMC, Lt. Gen. Abdel Fattah Abdelrahman Burhan asserted that “It can’t continue like this” (Swiss Info, April 22, 2019). On the night of the 29th, it appears that the military began to remove some of the blockades, leading to fears that the next step is intervening against the demonstrations (Al Jazeera, April 30, 2019).