Last week, in Asia, key events included heavy fighting in Afghanistan; organized violence involving domestic rebel groups in Pakistan, Myanmar, and Thailand; election-related disorder in India, Indonesia, and the Philippines; and Labour Day demonstrations across the region.
In Afghanistan last week, fighting increased in the province of Kandahar, seemingly as part of a major Taliban assault into the districts of Maywand and Shah Wali Kot. Meanwhile, Afghan military counter-operations were most concentrated just north of Kandahar, in the provinces of Ghazni and Urozgan. Military operations were also heavy in the northwestern province of Badghis, where the Taliban have been attempting to gain territory since the beginning of 2019. In the northeast, a major battle was fought between Afghan soldiers and Taliban militants after the latter launched a multi-pronged attack to take the district of Burka, Baghlan province. In Nangarhar, two NATO airstrikes reportedly killed 43 Islamic State (IS) militants in Chapa Dara district. IS activity has been in decline for several months, and the group often recruits fighters from bordering countries to fill their ranks. In this case, several of the dead were allegedly Uzbek and Pakistani nationals.
Meanwhile, in Kabul, Afghan President Ghani called a Loya Jirga (grand assembly) last week, which was attended by approximately 3,200 people. The goal of the assembly was to discuss methods of reaching a peace deal with the Taliban, who thus far have refused to deal with the Afghan government directly. The assembly called for a prisoner exchange, the opening of a national Taliban office, and a ceasefire coinciding with the beginning of Ramadan (6 May). However, the Taliban have thus far rejected the truce (RFERL, 3 May 2019).
With ongoing general elections in India and recently concluded elections in Indonesia, events related to elections continued to stand out last week. In India, large-scale rioting and targeted attacks on political activists were reported during the fourth phase of the general elections which was held on 29 April. Most rioting events were recorded in the states of West Bengal and Jammu & Kashmir (J&K). In addition, militant groups remained active in J&K and states affected by left-wing extremism. In J&K, suspected militants launched attacks on several political activists and an off-duty policeman, reportedly killing a local Bharatiya Janata Party (BJP) leader in Anantnag district. Meanwhile, Maoist rebels repeatedly clashed with security forces and executed suspected police informants in Bihar, Chhattisgarh, Jharkhand, Maharashtra, and Odisha. Last week, events involving Maoist rebels reportedly left 22 people dead, including 16 people who were killed in an improvised explosive device (IED) blast triggered by Maoist rebels in Maharashtra’s Gadchiroli district on 1 May.
As the official election results are being awaited in Indonesia, there were a number of election-related protests and riots across the country. Two of the protests were held by supporters of Prabowo Subianto. With midterm elections scheduled for 13 May, election-related violence continues in the Philippines with two campaign leaders for mayoral candidates, one from the Nationalist People’s Coalition and one from the Nacionalista Party, reportedly killed by unidentified assailants.
Elsewhere in South and Southeast Asia, organized violence involving domestic rebel groups was reported from several countries. In Myanmar, despite recently holding talks, the military and the Kachin Independence Organization/Kachin Independence Army (KIO/KIA) continued to clash last week in northern Shan state. The clashes come as the military announced it would extend its unilateral ceasefire an additional two months until 30 June (The Irrawaddy, 1 May 2019). The ceasefire does not cover Rakhine state where last week the military reportedly shot and killed six Rakhine villagers among a group of villagers who had been arrested and accused of connections to the Arakan Army (AA). Near Three-Pagodas Pass, in Kayin state, there was a clash last week between the Karen National Union/Karen National Liberation Army (KNU/KNLA) and New Mon State Party/Mon National Liberation Army (NMSP/MNLA) over disputed territory.
In Pakistan, security forces carried out several operations in Khyber Pakhtunkhwa and Balochistan provinces in a bid to curb militant activities, reportedly killing six suspected militants. In addition, armed groups operating from across the border in Afghanistan launched an attack on Pakistani army soldiers involved in fencing operations along the border in Khyber Paktunkhwa, reportedly killing three soldiers and wounding seven others. The Pakistan Army claimed that in retaliation scores of suspected militants were killed and injured.
Following a period of low activity along the Line of Control (LoC) in the contested Kashmir region, shelling and small arms fire between Indian and Pakistani security forces were reported over several days, resulting in the reported death of a Pakistani minor.
Separatist violence in Thailand was concentrated in Pattani last week with two reported fatalities. The violence comes as Thailand crowned its new king and with the official results of the general election held in March expected later in the month (Voice of America, 6 May 2019).
In other developments, workers and activists across the region took to the streets on Labour Day on 1 May. Demonstrations were held in India, Pakistan, Myanmar, Thailand, Cambodia, Indonesia, Malaysia, and the Philippines. While the demonstrations were mostly peaceful and allowed by the authorities, in Indonesia, police cracked down on a demonstration in West Java. 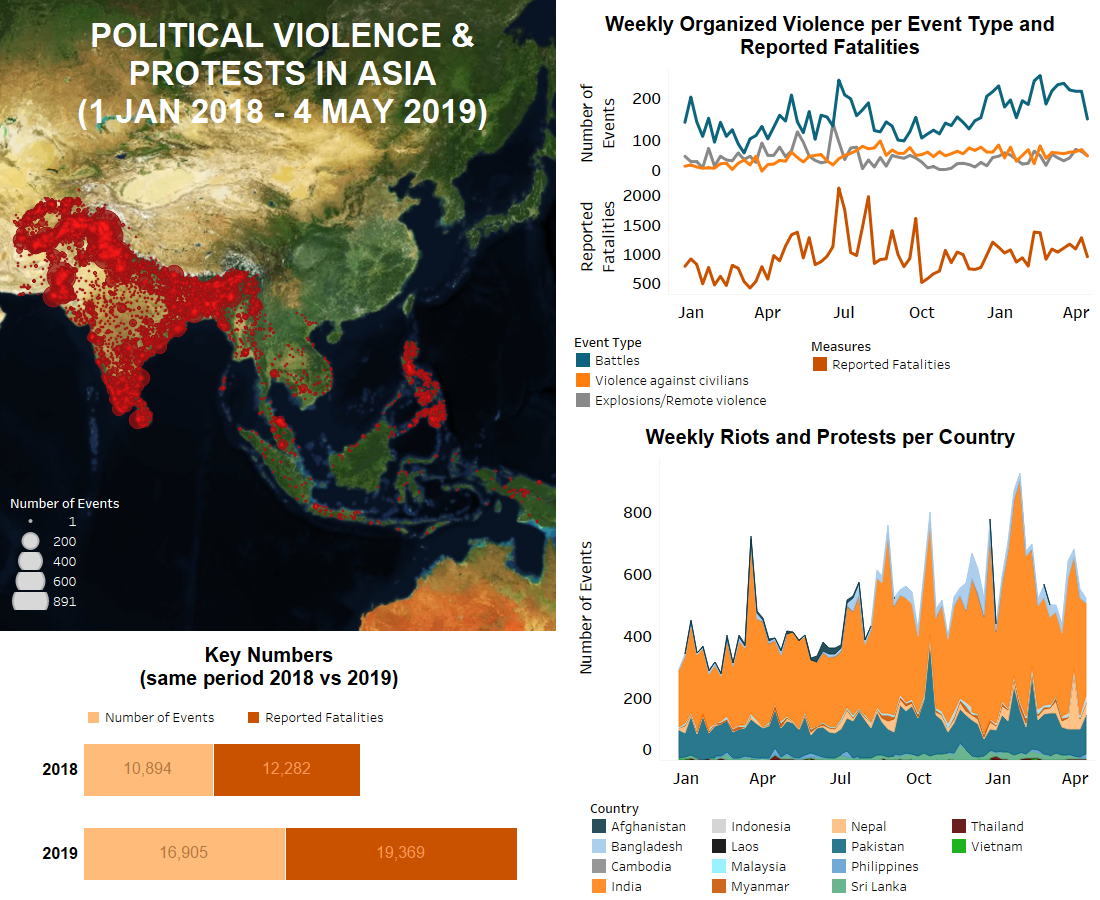