Key developments in Africa in the week of May 5th include continued government offensives against al Shabaab in Somalia, renewed al Shabaab attacks in Kenya, the ongoing battle of Tripoli in Libya, communal and rebel violence in Democratic Republic of Congo, international military operations in Burkina Faso and election protests in South Africa.
In Somalia, interactions between Somalia Government/AMISOM forces and al Shabaab continue. Government and Africa Union forces began offensives against al Shabaab in several areas: on May 5th security forces captured Buurweyne in Hiraan, launched an arms raid in the Marka District of Lower Shabelle, and a joint US/Somali government airstrike was carried out against al Shabaab forces at Tortoroow, causing three reported fatalities. This was the first US-backed airstrike in Lower Shabelle in three weeks. US forces carried out additional strikes on May 8th  and 9th against Islamic State targets in Puntland, causing a reported 17 fatalities over two days. Al Shabaab carried out a number of offensives north of Mogadishu: in Balcad District, al Shabaab began an extensive attack on two SNG defensive bases on May 6th, leading to the reported fatalities of 11 soldiers. Later reports suggested an unnamed al Shabaab leader died in the operation.  In Lower Shabelle, al Shabaab bombing attacks against mobile SNG and AMISOM forces continued with regularity. Rivalries between the Islamic State and al Shabaab were highlighted after al Shabaab forces carried out a search of a recent defector to IS. Al Shabaab intelligence traced the defector from the Galgala Mountains to Middle Juba, a distance of over 1,000km, but was ultimately unsuccessful in capturing. Elsewhere, pastoralist violence continued. Militias from Omar Mohamud and Sa’ad groups clashed in Gaalkacyo District on May 8th over lingering livestock and land ownership disputes. The clash marked the first violent interaction between the groups since December 2018, and the first armed clash among the two since May 2017.
In Kenya, al Shabaab appears to have resumed regular cross-border attacks from Somalia following a lengthy absence. On May 5th, fighters from Somalia carried out an attack on Hareri village near Mandera. This followed an abduction of two Cuban doctors in Mandera on April 12th, which marked al Shabaab’s first activity in Kenya since January. Kenya’s Teacher Service Commission removed a number of their from the north-east area due to the increased threat of violence. Showing further evidence of a coordinated effort to re-engage Kenya territory beyond the north-east, police discovered threatening al Shabaab graffiti writings in Lamu, nearly 700km to the south of Mandera on May 6th. Related to the ongoing al Shabaab threat in Somalia, and increasingly along Kenya’s eastern border, the US and Kenyan government made a “joint pledge” on May 8th to increase economic and military ties in an effort to “down-grade al Shabaab.” It is currently unclear if the joint venture will result in the direct military or financial assistance from the US.
In Libya, the Haftar-led offensive on the Western-backed Government of National Accord positions in Tripoli continues. There have been more than 450 reported fatalities, thousands wounded and over 50,000 displaced over the span of a month.  International tensions were ratcheted up further after Haftar forces shot down and later captured a Portuguese mercenary pilot early in the week. To the south, Islamic State launched an attack on civilians in the vicinity of Ghadduwah, reportedly causing two fatalities, the abduction of a third, and destroyed several structures.
In the Democratic Republic of Congo, the Allied Democratic Forces (ADF) carried out three confirmed attacks on civilians and military sites in North Kivu during the past week. The group also released a number of civilians, whom they abducted during attacks in the Ituri province the week prior. Also in North Kivu, a suspected Mayi Mayi militia attacked Butembo on May 8th.  Congolese security forces responded and repelled the attackers. The clashes resulted in eight fatalities and temporarily hampered Ebola response operation within the city. In South Kivu, communal clashes broke out in the neighbouring regions of Fizi and Minembwe following the murder of a Banyindu customary chief on May 4th. At least 10 villages in the region have been burned in the ensuing clashes, resulting in the displacement of civilians in the region. The military has not yet intervened, stating that the matter is the responsibility of the police due to its communal nature.
In Burkina Faso, on May 9th, a joint operation between French military forces of Operation Barkhane, the national military forces and support from United States intelligence, freed four foreign national hostages. The hostages including two French, one American, and one South Korean. During the operation, four combatants who were suspected of belonging to the Group for Support of Islam and Muslims and/or Islamic State (JNIM/ISGS) were killed, along with two French soldiers. Also this week, the national military forces launched Operation Ndofou to combat the armed groups and insecurity in the provinces of Centre-Nord, Nord, and Sahel.
Lastly, several protests occurred over the week of South Africa’s election. In the Khayelitsha area of Cape Town, a large group blocked roads before dawn on May 8th; in Plettenberg Bay demonstrators blocked the N2; in Durban groups blocked roads and lit fires in at least six locations. Election unrest in suburban Durban was the most intense, as two voting stations fell victim to arson attacks in Umgababa. Though the ruling Africa National Congress (ANC) was beset by accusations of corruption throughout the election, the party retained power, albeit with a reduced majority in the National Assembly. 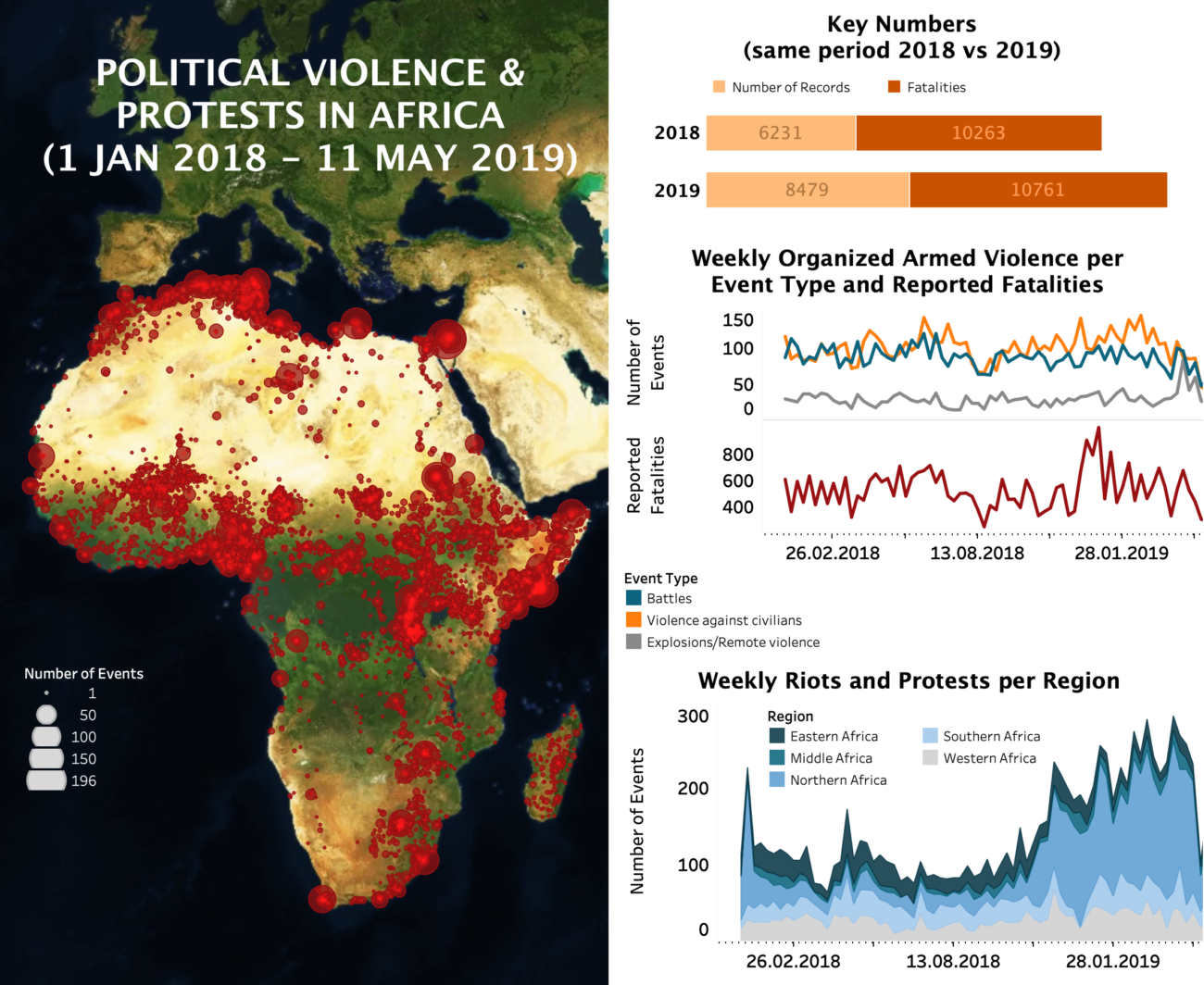