Major developments for the week of May 12th include successful military offensives in Nigeria, a large reported Islamic State attack in Niger, several al Shabaab bombings in Somalia, continued violence in Democratic Republic of Congo’s North Kivu and political turmoil in Central African Republic and Sudan.
In Nigeria, military forces made significant inroads against Boko Haram. In an announcement on May 13th, an army spokesperson announced that a unit of soldiers performed a successful insurgent clearing operation in Borno State, which also led to the rescue of 54 hostages. Elsewhere in Borno, 117 Task Force Battalion and the Civilian Joint Task Force militia cleared six villages in Chibok Local Government Area on May 12th. Seven other locations were cleared by military forces in Maiduguri, Mobbar and Biu Local Government Areas. However, on May 13th three soldiers, including a lieutenant colonel, were reportedly killed by a Boko Haram roadside blast 30km North near Damboa. Four other soldiers sustained injuries. It is unclear which faction of Boko Haram implemented the attack, though Shekau’s fighters have favoured roadside IEDs in the recent past.
In Niger, twenty-nine members of the Nigerien army’s Compagnie Speciale d’intervention (special forces) based in Ouallam were reportedly killed during an ambush by suspected Islamic State Greater Sahara (ISGS) fighters near the Mali border. The May 14th ambush marks the single deadliest attack on state forces in Tallaberi Region. The mass attack comes only a few weeks following IS leader al-Baghdadi’s call to “have the [Sahel emanating the caliphate]” in his late April video announcement. However, direct evidence that the Tallaberi attack was influenced by Islamic State (IS) leadership is yet to be seen. It is further speculated that ISGS is fostering a closer relationship with IS-backed Barnawi factions Boko Haram, loosely based 1,000km to the east.
In Somalia, the Mogadishu area was beset by several al Shabaab bombings. On the 14th, a car laden with explosives targeted a Ramadan food distribution centre near the Presidential Palace in Warta Nabadda district. There were four reported fatalities and over 30 injuries. The blast comes two days after a similar and deadly attack on Hodan District. Al Shabaab officially claimed responsibility in both instances, stating their intended target was a Turkish military advisor who was attending a security meeting in the area. Similarly, al Shabaab is believed to have assassinated a Somali military officer in Kaaraan District.  Outside the city, a group of mobile government forces was attacked with a roadside bomb on the 14th. Causalities from this event are inconclusive. Somali military forces fared better in Lower and Middle Shabelle Regions; on May 12th troops repelled an attack on Arbacow settlement and successfully gained control of two Balcad villages following an extended battle. Fifteen al Shabaab fatalities were reported in Balcad. On the 15th, government forces launched an offensive an an al Shabaab position north-west of Afgooye, which caused fatalities and al Shabaab to flee. In Gedo, al Shabaab carried out a complex attack against Jubaland forces at Geedweyne on May 14th. Al Shabaab overtook the village and abducted several NGO aid workers following the Jubaland retreat.
The Democratic Republic of Congo continues to be very active in the east. The Allied Democratic Forces (ADF) carried out four attacks in North Kivu, one of which – in Anzuma – was claimed by Islamic State (although doubts remain). On May 13th, an unidentified militia attacked the Ebola Treatment Centre in Katwa, but was repelled by the military. The Centre was set on fire the following day. In South Kivu, communal clashes continued between armed groups associated with the Ngumino and Banyamulenge in the Minembwe region, displacing a reported 20,000 to 25,000 civilians. Democratic Forces for the Liberation of Rwanda (FDLR) moved of an estimated 3,000 of their combatants into the Kalehe territory, South Kivu. The concentration of forces to the area is believed to be a preparation for a possible incursion into Burundi. This development has alarmed local civil society organizations who have called for security forces to be deployed to the area.
Lastly, political tensions are high in the Central African Republic and Sudan.
In the Central African Republic, the implementation of the Peace Agreement continues to be contentious. The Coalition for National Defense and Security (CNDS) and Popular Front for the Renaissance of Central Africa (FPRC), both ex-Seleka groups, have accused the Government of the Central African Republic of violating the peace agreement this week. This stems from the deployment of military forces to Kaga-Bandoro, Nana-Grebizi a stronghold of the Patriotic Movement for the Central African Republic (MPC) on May 5th. The government troops, who were escorted by MINUSCA withdrew from the city on the same day as their deployment, leaving the town under the control of the MPC.
In Sudan, Alliance for Freedom-backed protests against the Transitional Military Council continued. Though leaders of both groups were expected to come to an agreement as to the civilian and military make-up of the body of the tentative governing body this week, negotiations between the two groups were suspended for 72 hours on May 16th. Immediately leading up to the breakdown of negotiations, a security contingent violently dispersed a large demonstration in central Khartoum, leading to five reported fatalities and 14 injuries over several days. The attacks drew international condemnation and sparked further demonstrations throughout the country. 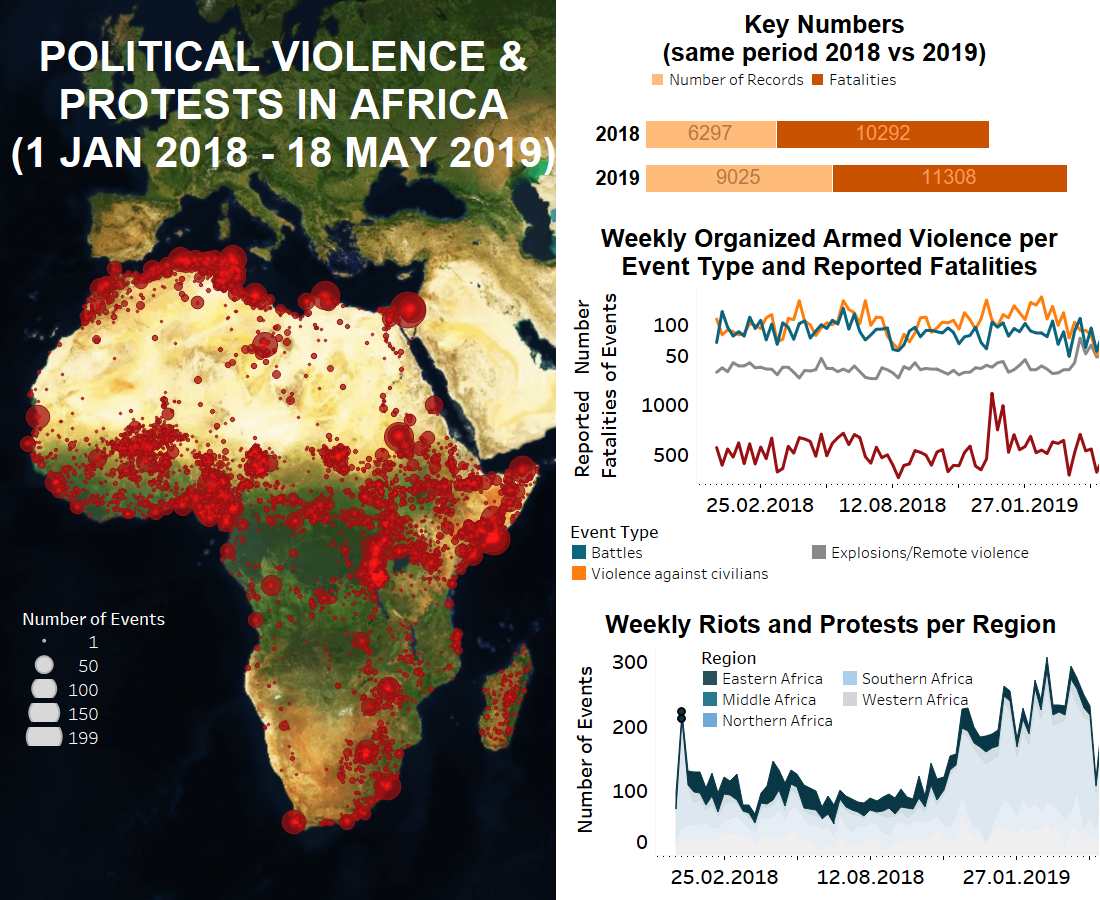