Major developments for the week of May 19th include a series of al Shabaab bombings in Somalia; a large Islamic State-Boko Haram attack against a military base in Nigeria; Ambazonian, Boko Haram and state violence in Cameroon; protests and strikes against the Transitional Military Council in Sudan; and continued protests in Algeria.
In Somalia, it was a very violent week, beginning with a series of al Shabaab bombings in Mogadishu. On May 19th, a vehicle loaded with explosives detonated at the rear entrance of the SYL Hotel in Wabari District. The target of the attack is believed to be Villa Somalia but the attackers were held at a checkpoint when their explosives detonated. Less than an hour later, suspected al Shabaab staged a similar attack on a vehicle traveling through Waberi District near the Djibouti School. In the following days, attacks continued: two government officials were assassinated mid-week, and a police checkpoint was attacked in Hawl Wadaag, and a military unit was attacked in Hodan. On May 22nd bombings resumed, when an explosive targeted soldiers in Boondheere District and civilians in two different areas of Dharkenley.  Outside the city, al Shabaab carried out a series of attacks against AMISOM and Somali government forces with small arms and IEDs alike. On May 19th, al Shabaab attacked government defensive bases in Lower Juba and Lower Shabelle Regions. In both instances, al Shabaab was forced to withdraw. Two days later, al Shabaab again attempted an attack against a military base in Lower Juba with the same result. Observers reported heavy movements throughout Middle Shabelle on this day, and an IED attack was reported on AMISOM forces traveling along a rural road. Several hand grenade attacks were also reported mid-week in Mogadishu and in Lower Juba. In Galgaduud, 100 students (aged 12-16) were reportedly abducted by al Shabaab in a forced conscription campaign from two villages near Dhasamareb. To the north, clashes were reported between Somaliland (SLA) and Puntland forces south-east of Ceerigaabo in Sanaag Region. The confrontation began after a Puntland government official was denied entry to an area village by the SLA. Several casualties are reported.
In Nigeria, the Islamic State (ISWAP) faction of Boko Haram continued a string of attacks against military bases north of Maiduguri. On May 19th, the group launched a large offensive against a military base in Gubio Local Government area, reportedly causing at least three soldiers’ deaths (possibly 15; Boko Haram claims 20), and displacing others. At least six remain missing. Military leadership claimed five ISWAP fatalities during their effort to force a retreat from the attackers. At week’s end, military leadership had yet to assess the full extent of the damage, though it involved the looting of a large cache of weapons. The attack is notable in that it comes only days after the military lifted an area curfew after complaints from farmers. It is not known if the measure will be reinstated. On May 22nd ISWAP released a video officially claiming the attack, which also purported to show the execution of nine soldiers, as was well as a re-declaration of allegiance to Islamic State leadership. It is so far not clear if the soldiers in the video were captured during the Gubio attack. In response to the attack, Nigeria Air Forces launched an air assault on an ISWAP base in nearby Monguno Local Government area on May 24th. The camp was destroyed with an estimated 10 fatalities.
In Cameroon, there were eleven reported clashes between military forces and Ambazonian separatists in the English-speaking regions in the west, primarily in Mezam, Bui, and Fako counties. Overall, there were 17 estimated fatalities due to the fighting. In reaction, several instances of extra-judicial behavior occurred against area civilians at the hand of regional security forces. “Hundreds” were arrested Buea and Douala; houses were looted and destroyed in Kumbo; and more than 10 civilians were shot and killed in Ekondo Titi, Nchang, and Eyumojock. In Extreme-Nord, Boko Haram launched at least eight separate attacks on civilian areas, causing an estimated seven fatalities. The motivation for the series of incursions is believed to be for food and supplies, as several villages were looted. Military forces engaged Boko Haram in Mayo-Sava and Logne-Et-Chari counties, two reported fatalities.
Finally, there were continued demonstrations against the interim governments in Sudan and Algeria.
In Sudan, heavy post-al Bashir demonstrations against the structure of the Transitional Military Council (TMC) continued with thousands camped near the Army headquarters in Khartoum. On May 21st Alliance for Freedom and Change leaders called for a general labour strike after negotiations with the military-led government stalled for the second time in a week. The major point of contention is the make-up of the intern council, with each side’s insistence of a single majority member. There appears to be some division within the protesting group: those who are open to negotiations with the TMC and those who wish the body ousted.
In Algeria, mass protests against the Gaid Salah-led interim military government continued. Demonstrators continued to demand a postponement of the upcoming July 4th, as many of their preferred candidates would not be eligible for the ballot in such a short time. On May 24th dozens were arrested when they attempted to gather at the Grand Post Office of Algiers. Witnesses reported authorities arresting those carrying anti-Salah banners before the event began. The attempted protest marks the fourteenth consecutive Friday demonstrators have gathered in the capital. At least thirty-eight other protests occurred throughout the country on the 24th, most without incident. 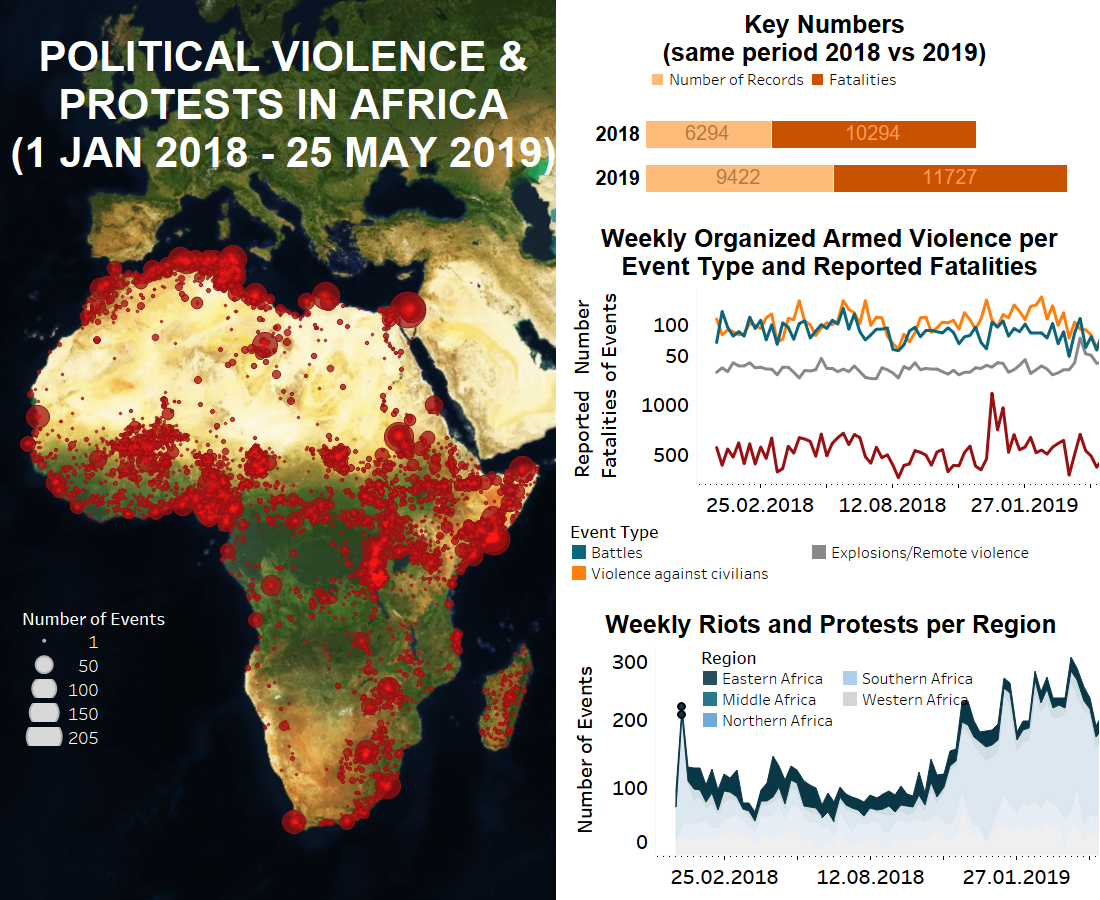