The biggest developments in the South and Southeast Asian region last week included heavy fighting between Taliban and Afghan security forces in Afghanistan, and attacks against civilians in Afghanistan, Pakistan, Myanmar, Thailand, and the Philippines. Fighting between state forces and domestic rebel groups in Pakistan, India, Myanmar and the Philippines was also recorded as were demonstrations and election-related violence in India, Indonesia, and Thailand.
In Afghanistan last week, heavy fighting continued throughout the country as both the Taliban and Afghan security forces launched assaults as part of their spring offensives. While the southeast has remained the primary battleground (for more on this, see this recent ACLED infographic), rising conflict in the northwestern province of Herat has been noticeable over the past two weeks. Several of Herat’s districts are contested, although remain under government control (Long War Journal, May 2019). Taliban assaults have been most frequent into Shindand, Herat’s southernmost district which borders two Taliban strongholds in northern Farah province: Khak-e Safid and Bala Buluk.
Meanwhile, several notable attacks on civilians occurred in Nangarhar and Kabul last week. In the former, six civilians were reportedly killed by Afghan state forces after they attempted to flee the scene of an earlier military operation and were mistaken for militants. UN representatives have raised concerns about civilians in Afghanistan, citing a report from April which shows rising civilian fatalities (Al Jazeera, 26 May 2019). Further west in the city of Kabul, a bomb exploded inside a mosque and reportedly killed three people, injuring 30 more. Among the dead – and most likely the target – was a prominent pro-government Imam known for his denunciation of militant groups. Neither the Taliban nor the local Islamic State (IS) affiliate have claimed responsibility for the Friday attack.
In Pakistan, domestic militant groups continue to be active in Balochistan province. Two new IED attacks – one at a mosque in the provincial capital Quetta and the second one on a Frontier Constabulary convoy in Killa Abdullah district – increase the total number of IED attacks to six since the beginning of Ramadan on 7 May. Meanwhile, security forces stepped up their Intelligence Based Operations (IBOs) following a roadside IED attack on a security force vehicle in Khyber Pakhtunkhwa province. Last week, at least nine suspected militants, including four Tehreek-i-Taliban Pakistan (TTP), were reportedly killed.
In India, the reported death of prominent militant leader Zakir Musa – the founder and leader of the Al-Qaeda affiliated Ansar Ghazwat-ul-Hind (AGuH) – during a cordon and search operation (CASO) led to widespread protests and rioting across Kashmir division.
In the Philippines, battles between the military and the New People’s Army (NPA) took place in Caraga and Eastern Visayas regions last week, resulting in nine reported deaths. Further, violence against civilians was recorded as the NPA abducted and reportedly killed a Mamanwa tribal chieftain. Likewise, in Thailand, separatists attacked the home of a civilian, a retired schoolteacher, in Pattani. Similarly, the ongoing fighting between the Myanmar military and Arakan Army (AA) continues to impact civilians (for more on this, see this recent ACLED piece). Last week, indiscriminate shooting by the military led to the reported death of a 10-year-old girl in Rakhine state; a Rohingya father and son were also killed last week after being caught in the crossfire between the two groups. In response, several protests were organized in four townships across Rakhine state by locals calling for an end to the conflict.
In other developments, elections remain a major theme in India, Thailand, and Indonesia. In India, voters cast their vote in the seventh and final phase of the general elections on 19 May while the election results were declared on 23 May. Incumbent Prime Minister Narendra Modi’s Bharatiya Janata Party (BJP) declared a resounding victory in the 17th general elections further solidifying the party’s rule. Across the country, the declaration of the election results led to a spike in recorded incidents of post-electoral violence including clashes among supporters of various parties and targeted attacks against rival candidates and voters (for more on this, ACLED is publishing a weekly infographic for each election phase – see last week’s India Election Monitor: Phase 6 infographic – and will also publish an analysis piece summing up the general elections later this week.).
As the results of the March elections in Thailand come into focus, two protests were held by the Democracy Restoration Group against the military’s continued grip on power. The results of Indonesia’s April elections also led to protests and riots which were recorded in Jakarta, West Sumatra, East Java, and West Kalimantan. The riots turned deadly in Central Jakarta as eight people were reportedly killed as police sought to contain the rioting. Peaceful protests were also held in support of the election results and in opposition to losing candidate Prabowo Subianto’s earlier call for protests against the election results.
Environmental concerns were likewise a central theme across the region last week as youth and student organisations took part in the global “climate strikes” aimed at bringing attention to environmental issues (CNN, 24 May 2019). Such protests were recorded in India, Malaysia, Indonesia, Myanmar, Thailand, and the Philippines.
In other news, as villagers in Sihanoukville in Cambodia protested last week over a land dispute and the delay by the state in issuing land titles, Chhun Dymey, a rapper whose new song “This Society” speaks to land issues among other problems in Cambodian society, has been under surveillance since his song went viral and was shared by opposition leader Sam Rainsy (Radio Free Asia, 24 May 2019). This harassment by the state reflects the government’s continued crackdown on civil society in Cambodia (for more on this, read this recent ACLED piece). 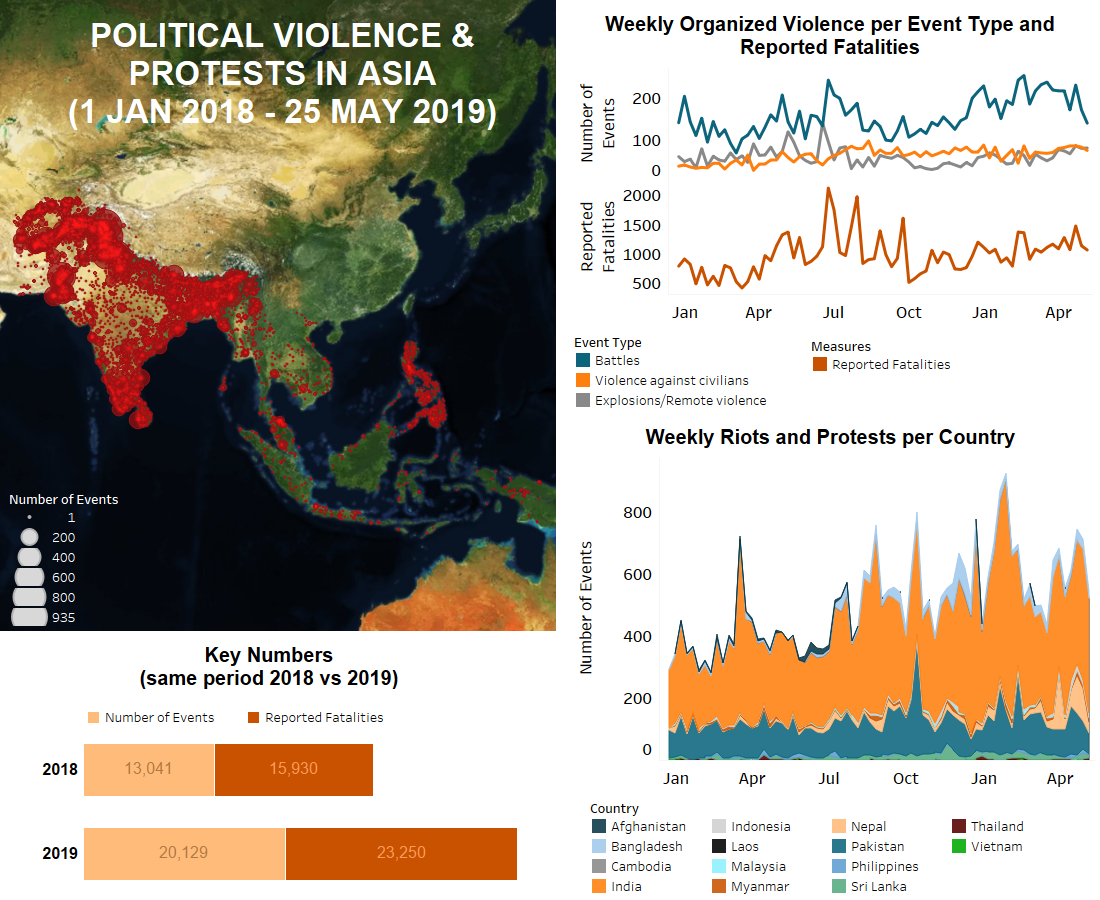