Relatively few demonstrations or violent incidents were reported last week in the Balkans, Southeastern Europe, and Eastern Europe. In EU member states, the last day of the European Parliament elections on 26 May and post-election period remained calm, with several election-related incidents only occurring in Greece and Romania. In Romania, the election and referendum results, combined with other developments, signal a potential change in government. In Russia and Ukraine, relatively few demonstrations were reported and fighting in the Donbass region continued at similar levels to weeks prior.

Tensions between Serbia and Kosovo flared last week, after an operation of Kosovo special police forces in the ethnic Serbian north led to the arrest of several police officers allegedly involved in organized crime (Balkan Insight, 28 May). The move was perceived in neighboring Serbia as largely anti-Serbian, prompting Serbian leadership to put its military in the state of full combat readiness, claiming that they would protect the Kosovo Serbs in case of escalation (Balkan Insight, 28 May). Among the arrested was also a Russian UN worker who was wounded, which provoked a strong condemnation from Russia (Balkan Insight, 30 May; RFE/RL, 28 May). Following the incident, several thousand ethnic Serbs in Mitrovica, Kosovo, took to the streets to protest the arrests.

In Bosnia and Herzegovina, another protest was held against corruption in the judicial system. Protests around this issue occurred throughout 2018 after the police handling of the death of David Dragičević. Despite the issue remaining unresolved, only a handful of such protests have been reported since February 2019.  Anti-government protests were held in Serbia and Montenegro, similar to weeks prior, whereas in Albania no events were reported while preparations were underway for another national anti-government demonstration on 2 June.

In Greece, one protest, two riots, and an attack on a political headquarters were reported in connection to the European Parliamentary elections. Demonstrations and acts of violence in support of the jailed Marxist hitman Koufodinas, which spiked in the weeks prior, died down to a single reported protest last week.

In Romania, the results of the 26 May European Parliamentary election and the referendum on amnesty for corruption charges proved a victory for opposition parties and anti-corruption advocates (Balkan Insight, 27 May 2019). The definitive sentencing and imprisonment of the PSD leader Liviu Dragnea, combined with the modest performance in the EU elections, (Digi24, 27 May 2019) makes room for a reshuffle in the PSD ranks and the entire government. On 26 and 27 May, hundreds of protesters in Bucharest demanded the resignation of Foreign Minister Teodor Melescanu (Digi24, 27 May 2019), after thousands of Romanians living abroad were unable to vote, causing protests and riots at voting stations in Romanian diplomatic offices in various EU countries (EuroNews, 27 May 2019).

In Russia, during another calm week, about two dozen demonstrations took place surrounding issues similar to weeks prior, such as pension and waste management reforms and on local construction projects. No armed clashes, bombings or attacks were reported last week.

In Ukraine, the situation outside the conflict zone remained calm with only four protests on local government issues and a prison riot reported. In the Donbass region, fighting between Ukrainian government forces and separatist rebels continued with 136 armed clashes and 143 shelling incidents resulting in three reported fatalities.

Other than the developments reported above, violence in the Balkans, Southeastern Europe, and Eastern Europe remained low. Two Roma women were attacked on two separate occasions in Kosovo, and in Croatia citizens held a large anti-Roma protest, reflecting ongoing anti-Roma sentiment in the region (Balkan Insight, 27 May).

Throughout the Balkans, Southeastern Europe, and Eastern Europe regions, demonstrations were held at similar levels to weeks prior, sparked by various concerns including labour disputes, environmental protection, and opposition to local construction projects. 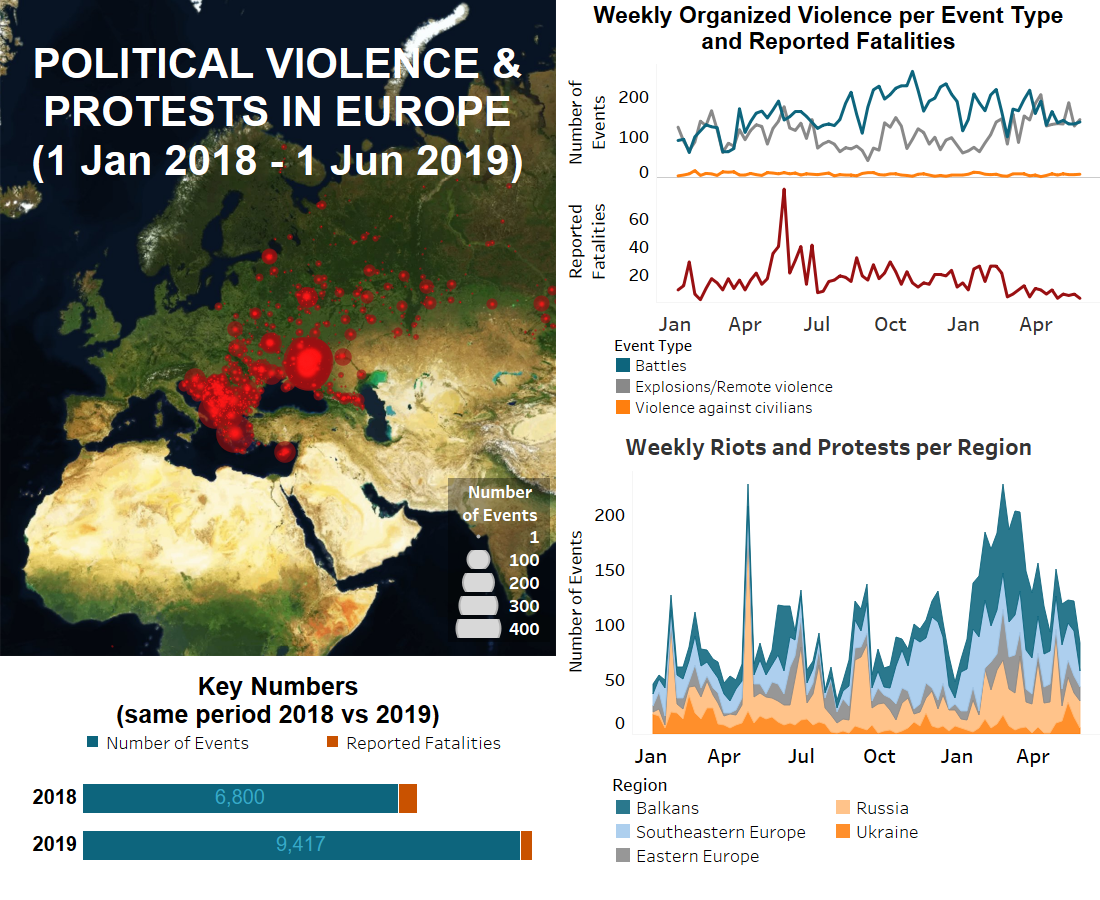