Last week in South and Southeast Asia, as many Muslims celebrated the end of Ramadan, a decline in event numbers was recorded in countries including Pakistan and Bangladesh, while deadly riots were reported in Indonesia. The key trends in the region last week included heavy fighting between Taliban and Afghan security forces in Afghanistan; targeted attacks on civilians by militant groups in Afghanistan, Pakistan, India, and Thailand; as well as ongoing post-election violence in India.

In Afghanistan last week, heavy fighting continued between Afghan forces and Taliban militants despite initial hope for an Eid al-Fitr ceasefire. The majority of operations took place in the provinces of Helmand, Kandahar, Zabul, and Ghazni. In the latter, Afghan state forces succeeded in reclaiming control of Khwaja Umari district following consistent assaults over the past year (TOLO News, 07 June 2019). Late last month, Dih Yak district was also retaken. Both had been captured by the Taliban during their 2018 spring offensive, which had focused heavily on territorial gains in Ghazni province.

Moreover, there were a number of incidents last week where civilians were reportedly killed or wounded by Afghan forces, NATO, and militant groups. Among these were three back-to-back explosions in Kabul city, one of which targeted a bus of alleged Shiite Muslim civilians. The Afghan Islamic State (IS) affiliate claimed responsibility for the attacks, which came only days after an IS suicide bomber detonated themselves outside the Marshal Fahim National Defense University in Kabul. While IS tends to be more active during Ramadan, it is possible that these attacks also signal a rise in the affiliate group’s strength. According to both Afghan and US officials, IS has undertaken mass recruitment drives – both inside Afghanistan and from nearby countries like Uzbekistan – and continues to stockpile weapons and supplies in the mountainous regions of Nangarhar and Kunar where the group operates. More generally, IS has continued to expand its presence globally throughout 2019 (for more on this, see this recent ACLED infographic). There is fear that with IS losing ground in both Iraq and Syria, Afghanistan may become its new base of operations (Associated Press, 10 June 2019).

In Pakistan, domestic militant groups continue to be active in Balochistan and Khyber Pakhtunkhwa province last week. In Khyber Pakhtunkhwa province, militants launched three attacks in North Waziristan tribal district where a sharp increase in attacks targeting security forces has been recorded recently. As many as 12 security force personnel have reportedly been killed and 38 have been reported injured in the last month (Tribal News Network, 8 June 2019). Meanwhile, in Balochistan province, militants launched two targeted attacks on security personnel and two IED attacks on members of the Shia Hazara and Bohra communities. In 2019, the Shia Hazara community has been the repeated target of militant violence, most notably in April this year when a suicide bomber attacked Quetta’s Hazarganji market (Dawn, 12 April 2019).

Civilians were also the target of organized violence in India and Thailand last week. In India, suspected militants reportedly shot dead two civilians and an off-duty Territorial Army soldier in separate targeted attacks in Jammu & Kashmir state. In Thailand, while separatist violence declined last week, in Narathiwat, suspected separatists reportedly shot and killed a civilian, a village chief who was praying in a mosque. The violence comes as Prayut Chan-ocha of the military-backed Palang Pracharat Party was selected to be the new Prime Minister (Asia Times, 5 June 2019), thus ensuring the military’s continued dominance in Thai politics.

Meanwhile, in Myanmar, civilian deaths were reported as a result of fighting between the Arakan Army and Myanmar military, which was concentrated last week in Minbya and Ponnagyun townships in Rakhine state. In both townships, artillery shells from nearby fighting fell in civilian areas and killed several villagers. Heavy fighting also led to many casualties on both sides of the conflict.

In India, three weeks after the last day of voting, post-election violence continued across the country, especially in West Bengal. Last week, 16 people were reportedly killed in election-related violence.

Various issues led to demonstrations in the region last week. In Sri Lanka, people across the country took to the streets in support of a senior Buddhist monk, demanding the removal of a Muslim minister, eastern province governor, and western province governor from their respective posts after the Easter Sunday bombings. In Malaysia, in Johor Baru, a protest was held by Orang Asli villagers demanding a resolution regarding compensation for their lands. A raise in tobacco taxes led around 1,000 tobacco farmers to protest in Phetchabun province in Thailand. Meanwhile, around 1,000 Lisu villagers protested in Kachin state in Myanmar against the Kachin Independence Organization/Kachin Independence Army (KIO/KIA), claiming the KIO/KIA had carried out unlawful detentions of Lisu villagers.

In other news, 13 people were reportedly killed in police drug raids in the Philippines, a decline from the previous week. In Indonesia, a man believed to be a member of Jemaah Ansharut Daulah (JAD) set off a suicide bomb at a police post in Central Java. 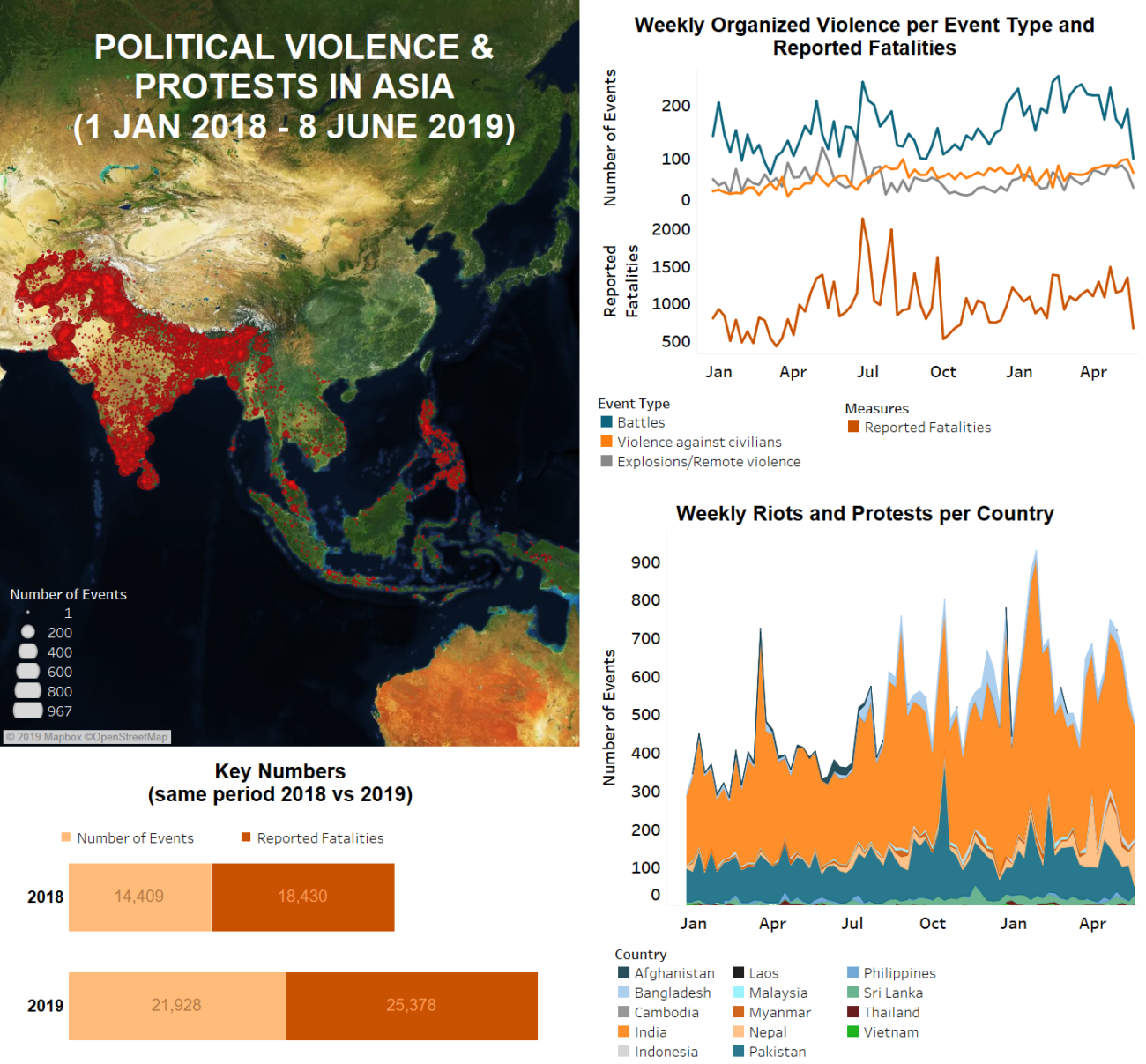