Last week, in South and Southeast Asia, key trends included: high levels of organized violence and reported fatalities as peace negotiations regarding the conflict in Afghanistan were called off; ongoing clashes between the Myanmar military and ethnic armed groups in Rakhine and Shan states; a wave of mob lynchings in India.

Intense fighting continued between state forces and the Taliban in Afghanistan last week. While the number of reported violent events decreased significantly compared to the prior week, the number of reported fatalities was the second-highest of any week in 2019. The Taliban claimed attacks on pro-government forces in typically quiet areas of the country, such as Bamyan province. Meanwhile, military forces conducted persistent campaigns against the militant group in several districts of northern Badakhshan province. Kunduz city, a key hub in the north, was at least briefly seized by the Taliban before the military launched a counter-offensive operation and recaptured the city on Sunday. Kunduz has previously been a site of major contest between militants and state forces in 2001 and 2015.

On Thursday, an explosion rocked a neighborhood in Kabul city near the American Embassy and the North Atlantic Treaty Organization’s Resolute Support mission office (AP, 5 September 2019). The suicide bombing, which was claimed by the Taliban, killed an American and a Romanian soldier as well as eight other people. American President Donald Trump cited this attack as one factor behind his decision to cancel secretly planned negotiations with the Taliban and the Afghan president at Camp David in the United States; this comes after months of negotiations between the United States and the Taliban were potentially reaching a conclusion (New York Times, 9 September 2019). Following this sudden development, the possibility for a political settlement to the nearly two-decade-long war in Afghanistan remains unclear.

In Pakistan, violence perpetrated by domestic armed groups increased last week following a brief lull in attacks for the previous two weeks. Unidentified assailants launched two coordinated improvised explosive device (IED) attacks in Balochistan’s capital Quetta. An IED attack on security forces was also reported from Lower Dir district in Khyber Pakhtunkhwa province. This is the second such attack since the Pakistan army handed over administrative powers to civil authorities in April last year after concluding its military operation to flush out militants who had taken control of some areas in 2009 (Frontier Post, 5 September 2019).

In India, relatively low numbers of riot and protest events continue to be reported from Jammu & Kashmir (J&K). The flow of information has been severely affected by the stringent security measures put in place. This coincides with the central government’s decision to repeal Article 370 of the Constitution which granted special status to J&K. Last week, Indian security forces forcefully interrupted several attempted Muharram processions by the Shiite community in J&K. Cross-border violence between Indian and Pakistani troops continued last week, reportedly killing one Indian soldier. Meanwhile, demonstrations against the Indian government and in support of Kashmir continue to be reported from the region, mainly in Pakistan but also in Bangladesh and Malaysia.

Last week, in Myanmar, the Brotherhood Alliance — comprised of the Palaung State Liberation Front/Ta’ang National Liberation Army (PSLF/TNLA), Myanmar National Democratic Alliance Army (MNDAA), and Arakan Army (AA) — and the Myanmar military continued to clash across Shan state. The alliance has since announced that they will hold themselves to a unilateral ceasefire for one month; the Myanmar military has extended its unilateral ceasefire to 21 September (Irrawaddy, 9 September 2019). Fighting also continued in Rakhine state where the military’s unilateral ceasefire does not apply. A member of the Brotherhood Alliance, the Arakan Army (AA), has clashed with the military in Rakhine state continuously since the start of the year.

Despite fears that violence would escalate following the recent death in military custody of a man linked to separatists in Thailand (Al-Jazeera, 27 August 2019), no political violence events concerning separatist groups were recorded last week.

In the Philippines, battles between the New People’s Army (NPA) and Philippine state forces continued last week. Also, an explosion at a public market in Sultan Kudarat left seven people injured; authorities have yet to identify the perpetrators of the violence.

Riot and protest events over the West Papua issue in Indonesia declined last week, though a handful of demonstrations were reported. They come amid growing calls for an investigation into the deadly demonstrations and attacks on Papuan protesters in recent weeks (Human Rights Watch, 7 September 2019).

Meanwhile, in India, mob lynchings of suspected criminals have significantly spiked in the past two weeks. Like during previous waves of vigilante violence, suspicions of “child lifting”, typically fuelled by rumors spread on social media or via messaging services, are the main reason for the outbreak of violence. People with intellectual or mental health issues are disproportionately more likely to fall victim to mob justice. 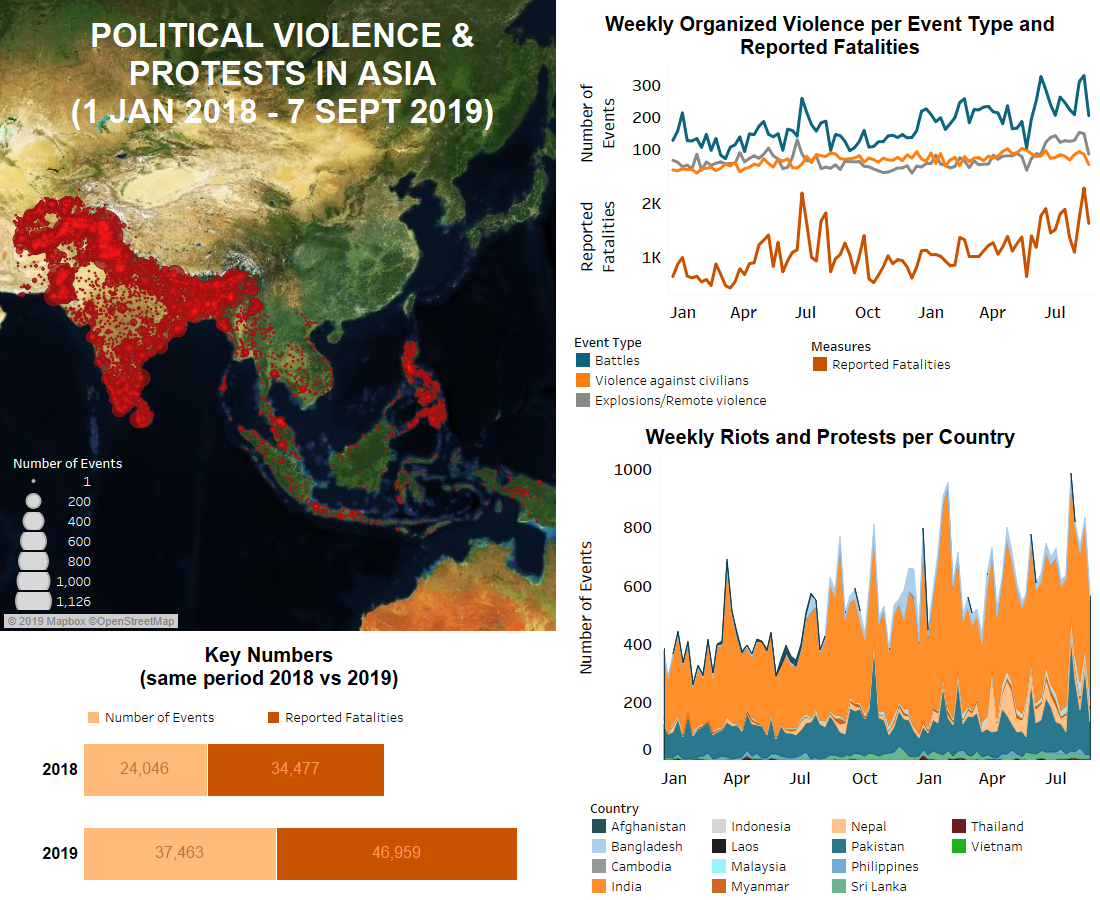