Key developments that took place over the past week include Houthi drone attacks on oil facilities in Saudi Arabia and Israeli airstrikes in Syria. Hezbollah also shot down an Israeli drone in southern Lebanon at the beginning of the week. As Israel prepared for the 17 September elections, Prime Minister Netanyahu vowed to annex all settlements in the West Bank, beginning with the Jordan Valley. Israeli airstrikes were also reported in Gaza, as well as rocket fire from Gaza into Israel. Major protests took place in Iran to end the entry ban for women entering football stadiums. Numerous protests also took place in Turkey against the dismissal of Peoples’ Democratic Party (HDP) mayors and against the Kurdistan Workers’ Party (PKK).

Houthi attacks against the border with Saudi Arabia continued, with several attempted drone and missile strikes into the southern areas of the country. Drone attacks on two ARAMCO oil facilities in al Buqayq and Khurays areas of Saudi Arabia made international headlines with speculation that gas prices, particularly in the US, will likely rise as a result (CNN, 16 September 2019). The US Secretary of State accused Iran of being behind the attacks — a claim which Iranian officials denied. Retaliatory airstrikes by Saudi forces against Houthi targets in Yemen are expected. In the rest of Yemen, clashes continued between pro-Houthi and anti-Houthi forces, as well as between pro-southern separatist militias and troops loyal to the internationally-recognized government.

At the beginning of the week, Israeli planes targeted a base belonging to the Iranian-backed Popular Mobilization Forces (PMF) close to the city of Abu Kamal in Syria, near the border with Iraq. The base also housed Hezbollah forces. The airstrike is the first time Israeli forces have attacked locations in eastern Syria in 2019. On Monday, 9 September, Israel accused an unnamed militia backed by Iran of firing missiles at northern Israel (Times of Israel, 10 September 2019). The next day, on 10 September, an explosion occurred at a PMF weapons storage facility near the city of Hit in Iraq. An Iraqi officer said there was a drone near the facility at the time of the attack. It remains unclear who was behind the attack, but it was the most recent in the string of attacks on PMF bases that Israel and the US have been accused of conducting (Haaretz, 10 September 2019). In Lebanon, Hezbollah also claimed to have shot down an Israeli drone that had crossed the southern border. While there have been long-standing tensions between Israeli forces and Iranian-backed groups such as Hezbollah and the PMF, the conflict appears to be increasing both in the rate of attacks and geographical range.

Meanwhile, Israel is set to hold elections today, 17 September. In the run-up to the elections, PM Netanyahu announced plans to annex areas of the West Bank if re-elected, despite the fact that the annexation of occupied territory is prohibited under international law. However, the announcement is likely to increase Netanyahu’s rating with the far right. Additionally, rocket fire from Gaza into Israel and Israeli airstrikes in Gaza continued last week, though neither resulted in any reported casualties.

Finally, major protests occurred in Iran and Turkey over the last week. In Iran, a young woman succumbed to her injuries after she set herself on fire on 2 September in front of a courthouse. She had been summoned to the courthouse following her arrest for dressing as a man to try to enter a football stadium. Her death led to an outpouring of grief and outrage on social media against the stadium entry ban for women, which has been in place since the early 1980s. A vigil was held on Thursday in Tehran at the location where the woman set herself on fire. Demonstrators blocked traffic for a few minutes and demanded that the government take action to reverse the ban.

In Turkey, demonstrations continued against the government decision three weeks ago to replace elected mayors from the Peoples’ Democratic Party (HDP) in Mardin, Van, and Diyarbakir. Meanwhile, sit-ins in front of the HDP building in Diyarbakir increased over the last week and garnered more government support. The families holding the sit-ins claim their children have been kidnapped by the Kurdistan Workers’ Party (PKK) and accuse the HDP of collaborating with the PKK. After a PKK attack on a civilian truck reportedly resulted in 7 civilian deaths, anti-PKK protests took off in several eastern provinces. These protests were also attended by government representatives. 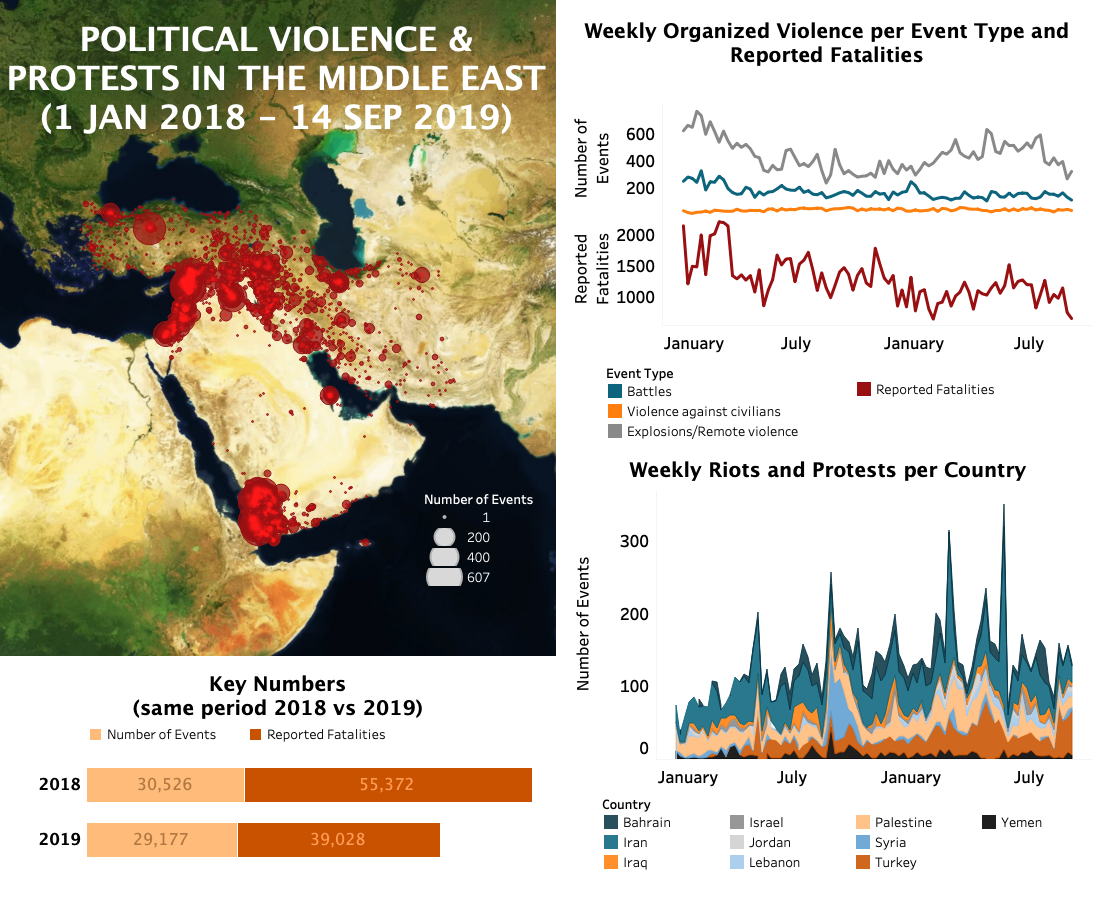