In Afghanistan, the number of events of politically-motivated violence and the number of reported fatalities decreased for the third and second consecutive weeks, respectively. More than one-third of events occurred in the southern provinces of Helmand, Kandahar, Wardak, Zabul, and Ghazni, highlighting the continued prevalence of the Taliban in an area that has historically been their stronghold. This contrasts with the last few weeks of the conflict, during which the group has exhibited an unusually significant presence in the north.

In central and southern Afghanistan, Afghan civilians and state forces suffered in several lethal suicide bombings claimed by the Taliban in major cities, including in Kabul. In Charikar, the capital of Parwan, a Taliban suicide bomber targeted a rally for the Afghan President, Ashraf Ghani, who is running for re-election this year. The Taliban do not support the electoral process and declared their intentions earlier in the summer to attack election-related events (Khaama Press, 6 August 2019). The potential for further attacks remains until Afghans vote on 28 September.

In India, internet and mobile services remain cut in the Kashmir Valley (The Wire, 22 September 2019). Information about the ground situation, while still incomplete, is slowly filtering out through international news sources. Many local news sources, such as Rising Kashmir and Greater Kashmir, are still not publishing or are only publishing uncontroversial news. The limited ground information available includes reports of state violence targeting civilians in the typically restive South Kashmir. There are also increasing reports of violence committed by both suspected militants and rioters against traders and other labour groups operating in defiance of shutdowns throughout the valley. Whilst key separatist leaders have been freed from detention (India Today, 20 September 2019), mainstream politicians remain in detention. This includes former Jammu and Kashmir (J&K) Chief Minister and National Conference leader Farooq Abdullah who was detained under the Public Safety Act on 16 September. The act allows for his continued detention without trial for six months: a period that can be extended for up to two years (Quartz, 20 September 2019). Reports have also emerged of the illegal detention of children by state forces (The Wire, 15 September 2019).

Meanwhile, a heightened level of cross-border violence between Indian and Pakistani forces continues. Last week, the area of confrontation expanded from the Line of Control (LoC) to the Working Boundary (WB), which had been largely free of violence since the lockdown began in early August. Rallies and demonstrations in solidarity with the people of Kashmir where held throughout Pakistan, in India’s Punjab state, and in Bangladesh last week.

In other news from India, intelligence agencies have reported increased Naxal rebel activity in Sukma and Dantewada areas of Chhattisgarh state and warn of likely attacks in the run-up to the Dantewada assembly seat by-election on 23 September (Outlook India, 19 September 2019).

In Myanmar, the unilateral ceasefire, which had been declared by the Myanmar military at the end of 2018 and extended until 21 September, was not extended (Irrawaddy, 23 September 2019). However, the members of the Brotherhood Alliance announced the extension of their own unilateral ceasefire until the end of the year (Irrawaddy, 20 September 2019). Meanwhile, fighting in Rakhine state between the Arakan Army (AA), a member of the Brotherhood Alliance, and the military continued. Civilian casualties stemming from these battles were reported. Fighting likewise continued in northern Shan state between the Palaung State Liberation Front/Ta’ang National Liberation Army (PSLF/TNLA), also a member of the Brotherhood Alliance, and the Myanmar military. Clashes between the PSLF/TNLA and the Restoration Council of Shan State/Shan State Army-South (RCSS/SSA-S), a Shan ethnic armed organization that has signed the Nationwide Ceasefire Agreement (NCA), were also reported in the area.

Incidents of vigilante violence, especially mob lynchings of suspected child-lifters, continue to be reported from across India. Meanwhile in Pakistan, last week in Sindh province, mobs of people attacked Hindu temples and properties of members of the Hindu community after a Hindu school principal was accused of committing blasphemy by his student.

Climate change was a key protest issue across the region last week. “Fridays for Future” demonstrations urging global leaders to act against climate change and protests concerning environmental issues were held in Afghanistan, Bangladesh, India, Nepal, Pakistan, Sri Lanka, Thailand, Malaysia, Indonesia, and the Philippines. The demonstrations come as a haze from fires in Indonesia’s forests blankets many countries in the Southeast Asian region (The Diplomat, 23 September 2019).

Protests continued for a second week in Indonesia over proposed changes to the Corruption Eradication Commission (KPK). As President Widodo starts his second term, those opposed to the new changes worry that a weakened commission would hinder anti-corruption efforts (Nikkei Asian Review, 18 September 2019).

Meanwhile in Nepal, continued public dissatisfaction with the 2015 Constitution of Nepal led to widespread protests across the country with people taking to the streets and burning copies of the constitution. Demonstrators alleged that the constitution did not ensure equal rights to marginalized minorities and demanded its amendment. 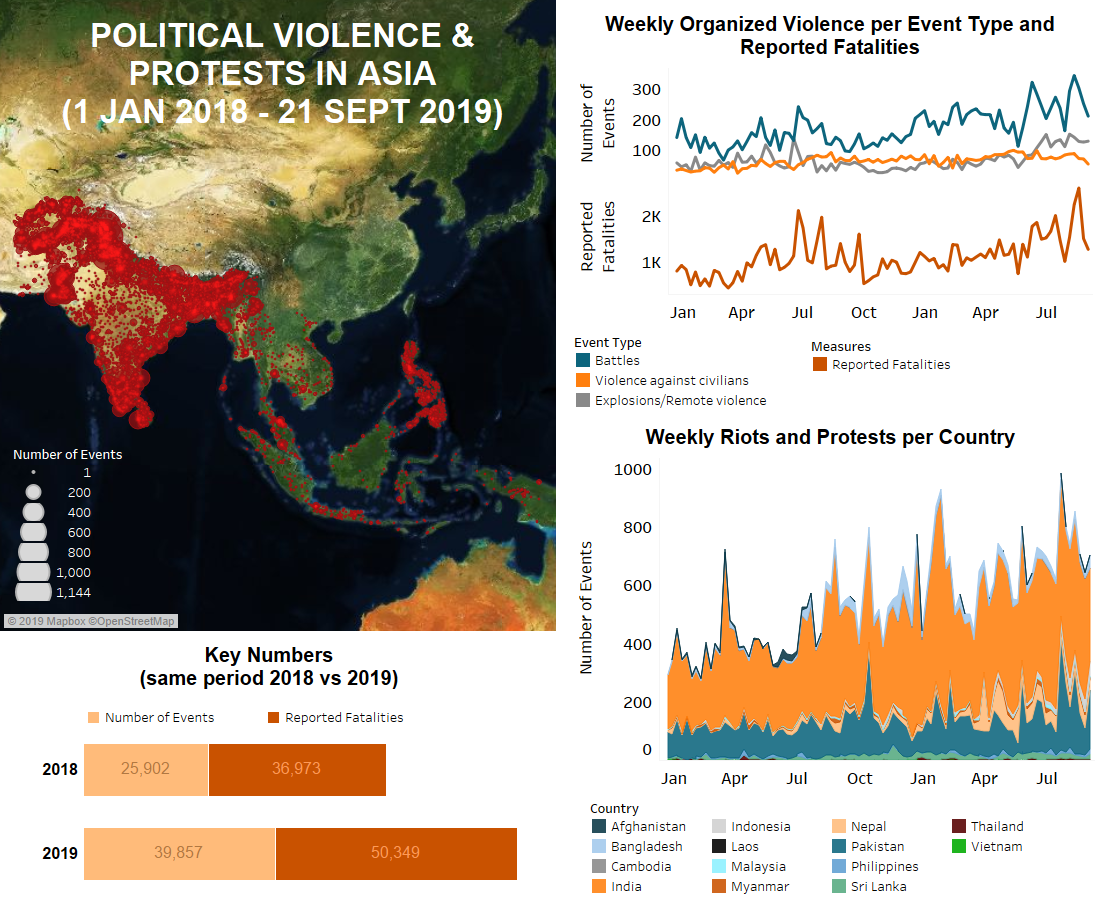