Key trends in South and Southeast Asia last week include: Islamic State-inspired attacks in Afghanistan, Indonesia, and the Philippines; an increase in cross-border violence in Kashmir; ongoing clashes between Afghan and Taliban forces in Afghanistan and between the Myanmar military and Arakan Army in Myanmar; continued separatist violence in Thailand; and a growing crackdown on the political opposition in Cambodia.

Islamic State (IS)-inspired violence was reported across the region last week. In the Philippines, IS claimed responsibility for an attack on a soldier in Marawi. Meanwhile, in Indonesia, a member of Jamaah Ansharut Daulah (JAD), an Islamist group affiliated with IS, stabbed Indonesia’s Chief Security Minister with a knife in Banten province. The attacks come as IS has stepped up efforts to gain ground in the Southeast Asia region (Foreign Affairs, 16 September 2019).

As well, IS in Afghanistan and the Taliban clashed in Kunar and Nangarhar provinces, two provinces where IS has a strong presence in Afghanistan. IS claimed two attacks in Nangarhar’s capital, Jalalabad. On 9 October 2019, at least nine Afghan forces and one civilian were killed and 27 were wounded by an IS-planted bomb that targeted an Afghan security forces recruits bus (Al Jazeera, 27 October 2019). On 11 October 2019, IS claimed responsibility for two explosions outside the house of the Nangarhar provincial council head. A third explosion targeted a mosque shortly after the Friday prayer, though no group has claimed responsibility for this attack (AP, 11 October 2019).

Last week, in Pakistan and India, there was an increase in political violence and protest over Kashmir. In Pakistan, Kashmir solidarity rallies against the Indian government’s revocation of Article 370, which gave special status to Jammu & Kashmir (J&K), continued throughout the country. In Azad Jammu and Kashmir, members of the Kashmiri community, supported by the Jammu and Kashmir Liberation Front (JKLF), attempted to march towards the Line of Control (LoC) for the second consecutive day on 6 October 2019. The local administration and police personnel halted the advancement of the protesters using barricades and barbed wire. By marching toward and crossing the LoC, the protesters hope to call attention to a UN resolution which declared the LoC crossing a lawful activity (Dawn, 6 October 2019).

Meanwhile, a continued increase in incidents of cross-border violence along the LoC and Working Boundary in the Kashmir region resulted in the reported deaths of a Pakistani and an Indian soldier, and three Pakistani civilians. The recent surge in the number of cross-border firing and shelling incidents may be symptomatic of growing tension between India and Pakistan amidst the on-going lockdown in J&K (Samaa, 1 October 2019).

In India, a number of civilians were injured in a grenade attack by suspected militants in Srinagar city in the second such attack in the last two weeks. While the internet and mobile phone services remained suspended across J&K, recent news reports indicated that the official lifting of security restrictions in the region was rolled out gradually during August and September 2019 (Business Standard; 13 October 2019). Additionally, the government lifted advisory requesting tourists to leave the state. The advisory was issued on 2 August 2019, several days ahead of the Indian government’s revocation of Article 370 (The Hindu, 11 October 2019). Although government officials remain non-committal, these developments suggest an end to the communication blackout in J&K may be approaching.

Elsewhere in India, protests against the Citizenship Amendment Bill (CAB) continued across northeast India for the second consecutive week, following a pause which coincided with the Lok Sabha elections in April and May 2019. Opponents of the bill, which would grant citizenship rights to undocumented non-Muslim immigrants, contend that legitimizing undocumented immigrants would threaten the indigenous communities of the region. The sudden uptick in protest events against the bill may be indicative of the revival of the protest movement following the recent re-election of the Bharatiya Janata Party (BJP), the main proponents of the CAB (Frontline, 11 October 2019).

Meanwhile, clashes continued in Afghanistan and Myanmar between state forces and domestic rebel groups last week. In Afghanistan, Afghan forces regained control over Archi (Dasht-e-Archi) district, Kunduz province. The district had fallen to the Taliban along with Qalay i Zal district and Kunduz city last month as a part of repeated assaults to gain control of the province’s capital and maintain it. The Taliban maintains a strong presence in the northern province due to its strategic location and economic significance, given that the city is a major agricultural hub (Radio Free Europe/Radio Liberty, 13 October 2019). Other major clashes between Afghan forces and the Taliban were fought in Ghazni province and Badghis province.

In Myanmar, clashes continued between the Arakan Army (AA) and Myanmar military in northern Rakhine and southern Chin states, leading to several reported civilian deaths. Notably, a bomb exploded near a National League for Democracy (NLD) office in Buthidaung township, highlighting insecurity in the region as the country prepares for elections late next year. Near the end of the week, the AA, dressed in civilian clothes, stopped a passenger bus near Mrauk U in Rakhine state and abducted 31 people, reflecting what appears to be a growing trend (New York Times, 13 October 2019).

Separatist violence continued in Thailand where a former village chief was reportedly shot and killed by suspected separatists in Pattani province. The violence comes as national-level political parties have taken up calls for justice in Thailand’s deep south in a departure from traditional party politics in the country that often leaves out the concerns of those in the region (Asia Times, 9 October 2019).

Finally, the repression of the political opposition in Cambodia continued last week. Arrests of Cambodia National Rescue Party (CNRP) members increased as CNRP leader Sam Rainsy is expected to return to Cambodia from exile in November. Amid the arrests, Prime Minister Hun Sen has threatened to use the army against the opposition upon Rainsy’s return. The CNRP’s calls for soldiers to defect have been wrongly framed by the Prime Minister as the CNRP attempting to incite a “coup” (VOA, 12 October 2019). The arrests and threat of a violent crackdown mark an escalation in the repression of the CNRP since the party was banned by the Supreme Court in 2017. 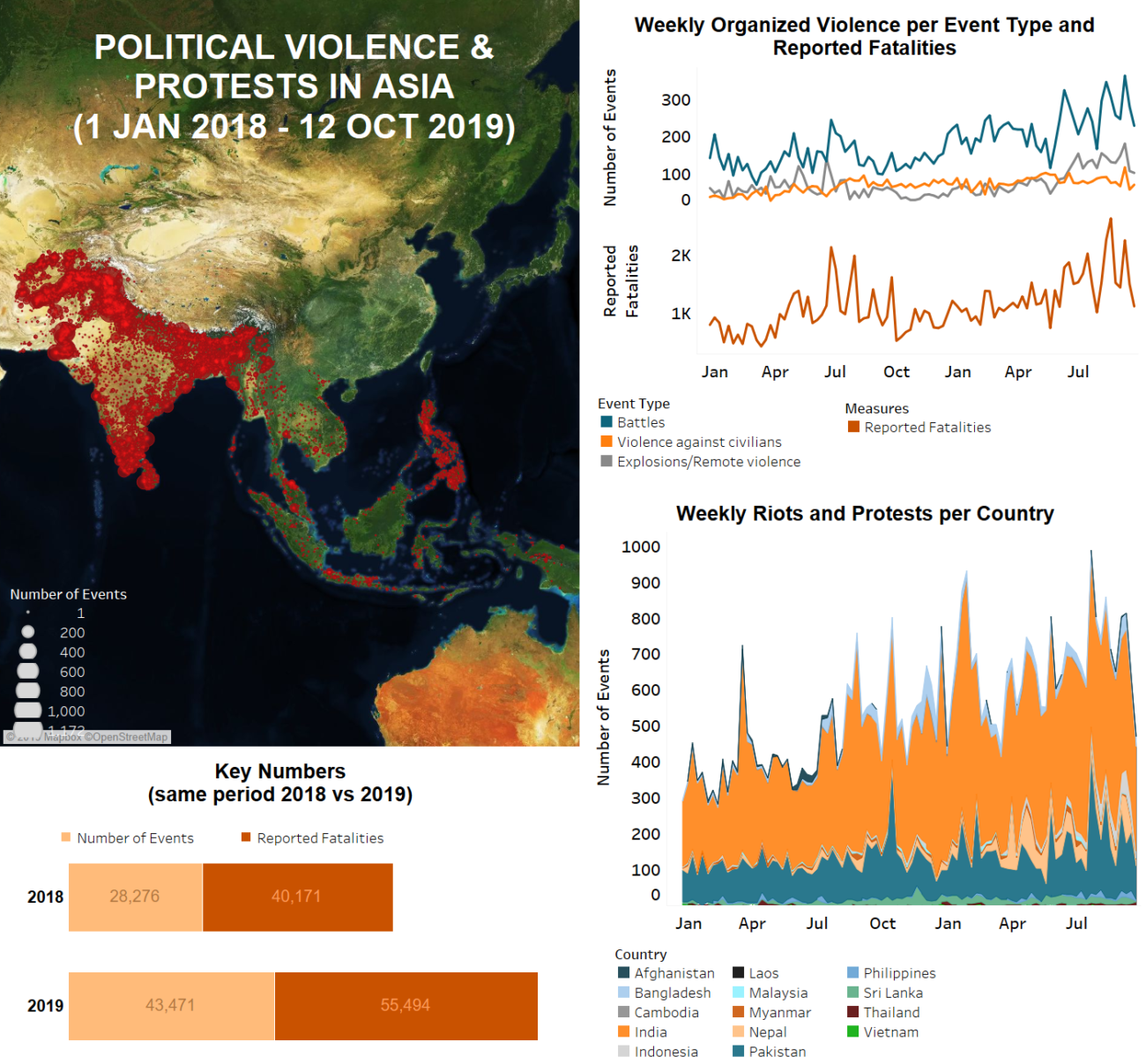