Last week in the Middle East, the ceasefire between Turkish and Kurdish fighters in northeastern Syria held, though sporadic clashes were reported. Anti-government demonstrations continued in Lebanon and Iraq despite the announced resignation of both Prime Ministers. In Yemen, there is potential for conflict resolution with the signing of the ‘Riyadh Agreement’. While there have been consistently low levels violence over the last few months in Israel and Palestine, last week there was a small increase with rocket launches on the Gaza border and settler attacks against farmers in the West Bank.

In Syria, the shaky ceasefire in northeastern Syria between Turkish-led Syrian fighters operating as part of Operation Peace Spring and Kurdish fighters from the People’s Protection Units (YPG) along with Syrian Democratic Forces (QSD) largely held, although sporadic clashes continued. Operation Peace Spring forces either captured or took control of a number of villages and areas near the town of Abu Rasin in the Ras Al Ain area in Al-Hasakeh province. The loss of these villages by QSD forces comes despite support from Syrian government forces, although they were able to maintain control of the town of Abu Rasin itself. Despite the lull in hostilities, at least 29 civilians were reportedly killed in fighting across Al-Hasakeh and Raqqa provinces during the week.

On Friday, the first joint Turkish-Russian patrols mandated as part of the Sochi ceasefire were carried out between the towns of Amuda and Darbasiyah in Al-Hasakeh province (Al Jazeera, 1 November 2019). Meanwhile, American military forces simultaneously withdrew from bases in northeastern Syria and redeployed in areas including at a base near the town of Ain Al Arab in Aleppo province. American and Coalition forces also carried out patrols near the city of Quamishli, signaling an ambiguous backtracking of the total withdrawal announced by President Trump at the beginning of October (The Economist, 10 October 2019). Syrian government forces continued to deploy to QSD-held areas in exchange for protection from the Turkish-led Operation Peace Spring.

Last week in Lebanon and Iraq, anti-government demonstrations continued despite each government’s response to quell the demonstrations. On Tuesday 29 October, Prime Minister Saad al-Hariri resigned following the nationwide mass protests sparked by a proposal to increase taxes. While many expected the protests to die down after the PM’s resignation, protests have continued, signifying a deeper political crisis in Lebanon. This crisis of confidence in the government is also a driving force in the demonstrations in Iraq (ACLED, 23 October 2019). The demonstrations in Iraq first started on 1 October with tens of thousands of citizens taking to the streets to demand more jobs, an end to corruption, and better services (BBC, 3 November 2019). On 31 October, Prime Minister Adil Abdul Mahdi agreed to resign on the condition that the two dominant parliamentary blocs can agree on his successor, to avoid a political vacuum and a constitutional stalemate (Atlantic Council, 31 October 2019). This conditional resignation will hopefully serve the Iraqi people in the long run. A political stalemate following the abrupt dismissal of the PM could lead to demonstrators facing off against each other in the street, which may increasingly be the case in Lebanon. It is important to note that the Iraqi demonstrations have been extremely violent with over 200 deaths reported since the beginning of October, while Lebanese demonstrations have been mostly peaceful. In the case of Iraq, if demonstrators are not provided with concessions to appease them enough to return to their homes soon, continued escalating violence will likely follow, making the politically savvy move too little too late.

Last week in Yemen, news of the impending signature of the ‘Riyadh Agreement’ dominated the news. While the signing of the agreement was postponed from 31 October, it was ultimately signed on 5 November (Al Arabiya, 5 November 2019).  On the ground, additional Saudi forces arrived in Aden in exchange for United Arab Emirates (UAE) forces. This is part of the planned re-deployment of coalition forces in Aden under Saudi command, in order to guarantee the return of pro-Hadi state institutions in Aden. This would also ensure the implementation of the ‘Riyadh Agreement’ and a reorganization of security and military arrangements to continue the battle against the Houthis (Reuters, 30 October 2019). Fighting in the southern province of Abyan over control of Ahwar city resumed, leaving a reported twelve people dead.

One of the most prominent reported attacks last week was the firing of a missile by pro-Houthi forces at a pro-Hadi military base, reportedly targeting a meeting of the country’s defense minister and senior military leaders. All except two soldiers survived the attack (Xinhua, 29 October 2019). Saudi-led coalition airstrikes increased in frequency as they carried out intensive airstrikes in Hajjah and Sadah governorates, and to a lesser extent in Sana’a.

A general drop in interactions between Al Qaeda in the Arabian Peninsula (AQAP) and the Islamic State (IS) in Yemen continues for the second week, with only sporadic sniper and shelling incidents being claimed by the two sides. A US drone, however, was reported to have killed two AQAP members in the Marib desert, the first such incident in two months.

After months of consistent low level violence in Israel and Palestine, tensions are heating, particularly along the Gaza border. On 31 October, ten rockets were fired into Israel from Gaza. Most were intercepted by the Iron Dome, but one caused damage to a house in Sderot. The Israeli military responded by launching airstrikes against dozens of Hamas targets in Gaza. The airstrikes reportedly killed one Palestinian man who was not reported to have any affiliation with Hamas (WAFA, 3 November 2019). Meanwhile, there has been an increase of settler attacks against Palestinian farmers, civilians, and property. This is common during the olive harvest where settlers often damage olive trees and prevent farmers from reaching their olive groves. Additionally, Israel still has not formed a government following the last election and it is possible for a third election to be held to address the political deadlock. The leader of Hamas, Yahya Sinwar, said that the absence of an Israeli government has stalled progress and strategic decisions regarding Gaza (Jerusalem Post, 4 November 2019). 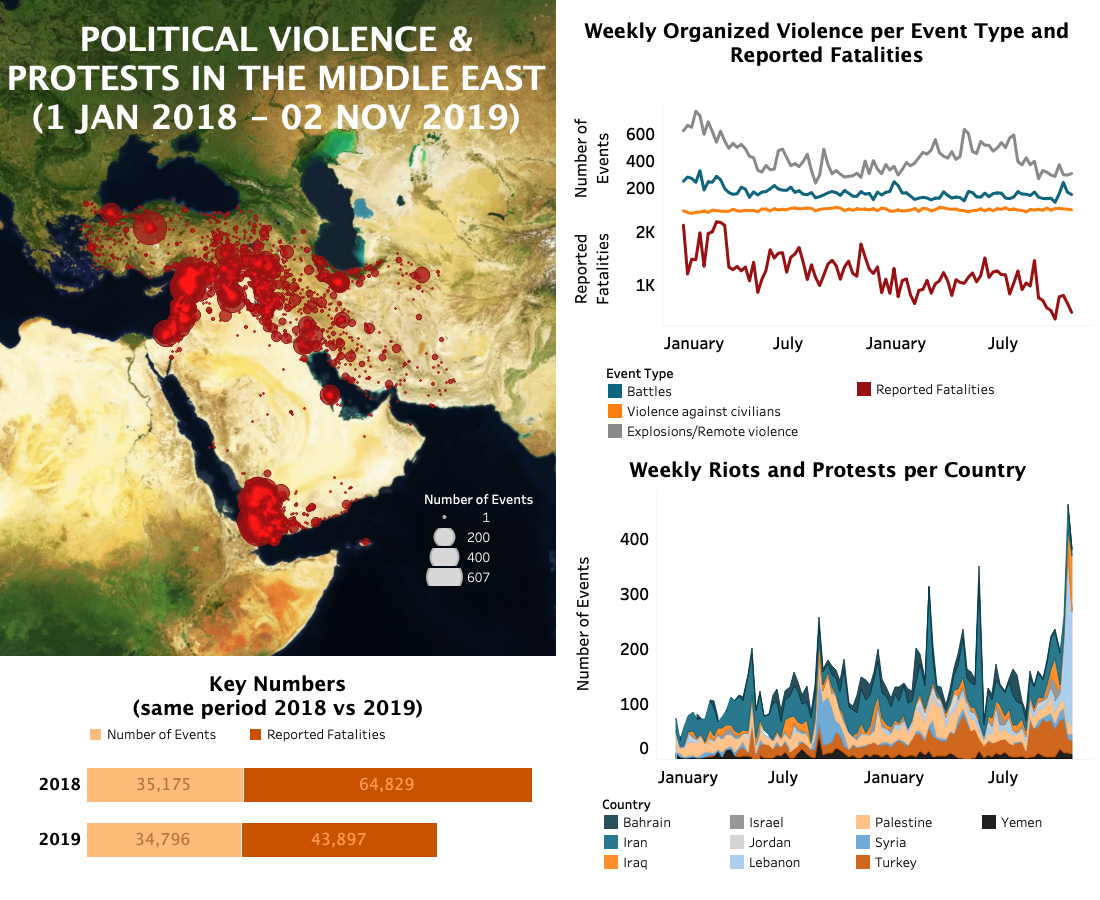