In Southeast Asia, key developments last week included: ongoing battles in Shan and Rakhine state in Myanmar; a slight increase in clashes between state forces and the New People’s Army in the Philippines; the death of two separatists in Thailand, alleged to be behind deadly attacks on security checkpoints earlier in the month; and demonstrations by farmers and laborers in Indonesia, Thailand, Myanmar and the Philippines.

In Myanmar, battles between the military and the Palaung State Liberation Front/Ta’ang National Liberation Army (PSLF/TNLA) continued across Kutkai, Kyaukme and Namhsan townships in Shan state. The military and the United League of Arakan/Arakan Army (ULA/AA) likewise continued to clash across northern Rakhine state and southern Chin state. In both conflicts, artillery shells have frequently been falling in villages, causing civilian casualties.

Meanwhile, in the Philippines, the conflict between state forces and the New People’s Army (NPA) increased last week with the NPA also involved in a number of events in which they targeted civilians. As well, the Vice President of the Philippines, Leni Robredo, who only this month accepted President Duterte’s offer to serve on the Interagency Committee on Anti-Illegal Drugs (ICAD), was fired from her position after Duterte accused her of bringing unwanted international attention to drug-related violence in the country (Channel News Asia, 25 November 2019). Robredo has been a strong critic of Duterte and his policies. Her firing is seen by many as proof that Duterte is not serious about making any changes to his anti-drug campaign; the “War on Drugs” is thus likely to continue with impunity (Philippine Daily Inquirer, 26 November 2019).

In Thailand, two suspected separatists behind the deadly 5 November attacks on security checkpoints in Yala were reportedly killed in a clash with the military in Pattani. The ongoing violence in the deep south has received attention from the Future Forward Party which has been critical of the military’s counter-insurgency operations in the deep south in addition to the military’s continued grip on power (Benar News, 17 October 2019). Last week, Thanathorn Juangroongruangkit, the leader of the Future Forward Party, was disqualified as MP after he was accused of violating election laws by holding shares in a media firm (BBC, 20 November 2019). Thanathorn has maintained the charges are politically motivated.

Finally, farmers and laborers protested across the Southeast Asia region last week. Protests over a lower than desired raise in the minimum wage were held in West, East and Central Java in Indonesia. Factory workers in Myanmar held a protest in the Yangon region over labor conditions and the harassment faced by the workers. Farmers in the Philippines demonstrated against rice liberalization laws, which have caused a decline in the price of rice. And, in Thailand, farmers demonstrated in Bangkok over land ownership issues. 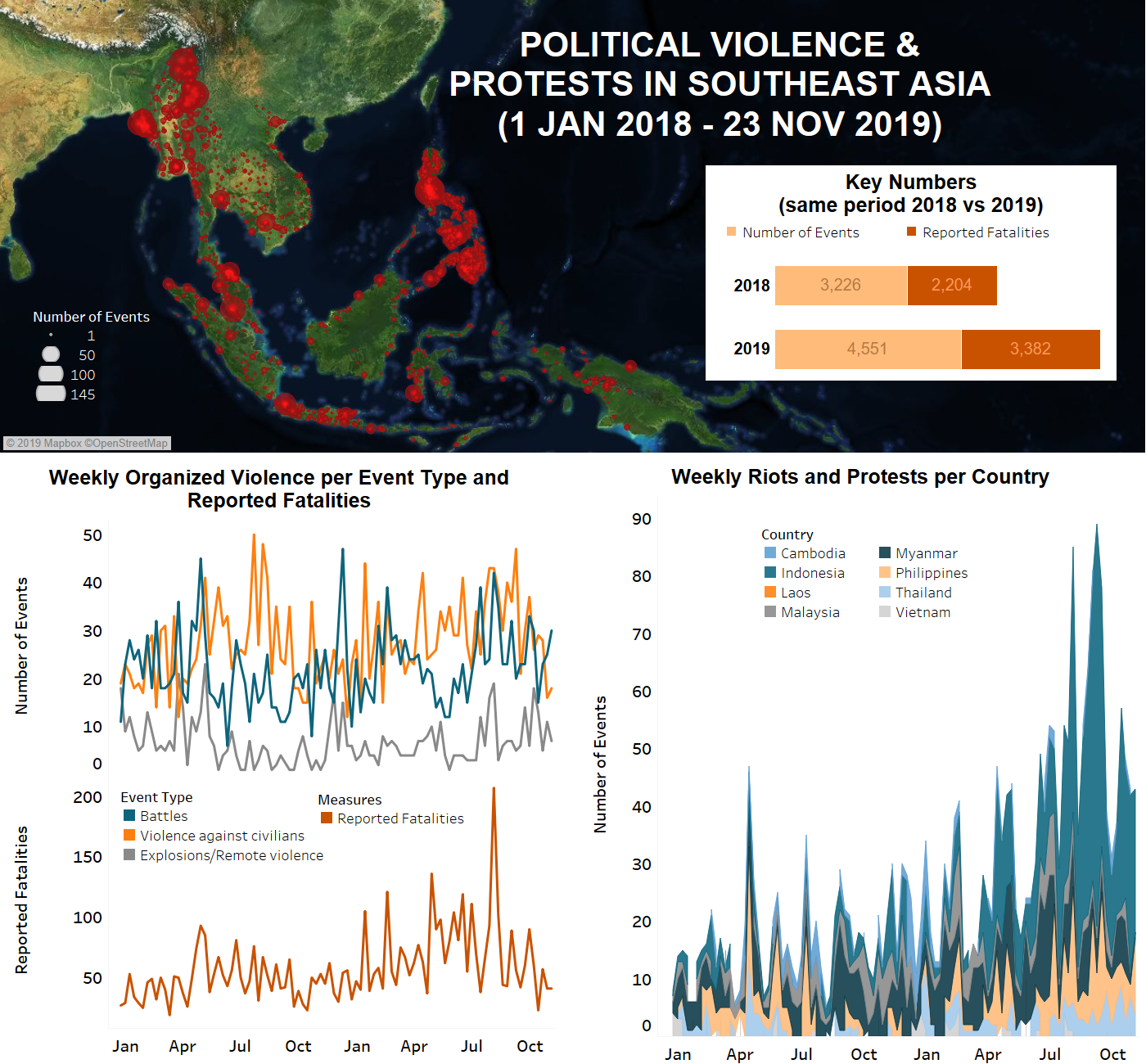